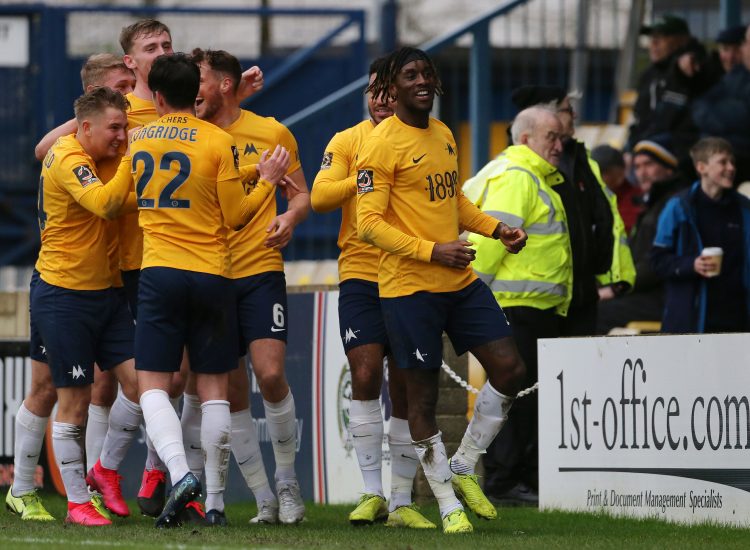 For a professional footballer, scoring on your debut is the perfect way to endear yourself to a new club and its supporters, and Ade Azeez wasted little time in reacquainting himself with the Yellow Army back in February.

It was back in September 2013 that a 19-year old Azeez – on a youth loan from Charlton Athletic – jumped off the bench to score his professional goal, minutes after putting on a Torquay shirt for the first time in the 2-1 away defeat at Newport County.

After giving the travelling support an instant showing of his potential, Ade repeated the feat in the next away game at Wycombe a fortnight later, before injury curtailed his encouraging spell with the club the following month.

Already an England U19 international, and having made a handful of senior appearances for Wycombe, parent club Charlton and Leyton Orient, Azeez was to prove a wanted man after recovering from injury, with his impressive displays for The Gulls signalling another loan spell, this time at divisional rivals Dagenham & Redbridge.

The following summer saw a switch to AFC Wimbledon give Ade the chance to establish himself in the Football League, with his dynamic performances not only helping The Dons to promotion in 2015/16, but also catching the eye of Scottish Premier League side Patrick Thistle, who gave him the chance to ply his trade north of the border the following season.

A regular in Thistle’s side throughout the campaign, his equaliser in a shock 1-1 draw at champions Celtic was a notable highlight, before a undisclosed fee prompted a return to League Two football with Cambridge United in July 2017.

A temporary move to Dover preceded a permanent move to Newport County, where a promising end to the 2018/19 campaign was blighted by a close-season injury, leaving Azeez out of the game until early 2020.

It was then that Torquay boss Gary Johnson came calling, with Ade welcoming the opportunity to return to the club, nearly seven years after his last run-out at Plainmoor.

As fate would dictate of course, it was during a tight encounter with Halifax Town on February 22nd that his header would deliver a 1-0 win for United, giving Azeez the distinction of being a debut goalscorer for The Gulls, at both times of asking!

Thank you to all our sponsors, including Ade’s Player Sponsor: