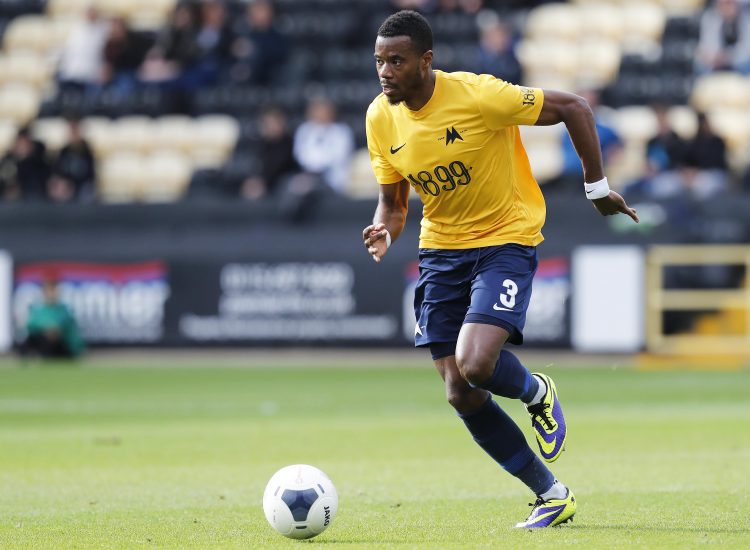 Having turned professional back in 2005 with Championship side Coventry City, Liam Davis is one of the most experienced members of a predominately young Gulls squad.

Liam’s know-how has provided United with a calming influence at the back for the past three years now, and during that time his value to team cannot be underestimated, with last season’s National League South title winning medal providing further evidence of that.

It was in English football’s second tier that Davis had made his senior debut for The Sky Blues, against Stoke City, fifteen years ago, making his way off the bench in front of over 16,000 supporters at the Ricoh Arena.

More first team action would follow over the next three seasons, both at City and via a productive loan spell at Peterborough, before the Wandsworth-born player departed for League One side Northampton Town.

Although his first season at the Sixfields Stadium would end in relegation, Liam was now relishing regular football, with his final season at the club providing a notable career highlight.

With Town earning a Carling Cup third round trip at Anfield to face Roy Hodgson’s Liverpool, few onlookers would have predicted anything other than a lucrative payday for the League Two side.

What followed though, was one of the biggest shocks in the competition’s history, with Davis playing a starring role in his side’s success. Not content with providing the assist for Billy McKay’s initial equaliser in the 2-2 draw, he then netted himself in the resultant penalty shoot-out to see The Cobblers progress at The Reds’ expense.

A change in manager shortly before his transfer to Oxford United that summer would see Liam work under current Gulls boss Gary Johnson for the first time, prior to their paths crossing again two years later.

After securing Yeovil Town’s remarkable promotion to The Championship in 2013, Johnson made the player one of his first signings for The Glovers, to give Davis another second shot in the second tier.

Despite putting up a valiant fight against the odds in a Division including the likes of Leicester and Leeds, Town were once again playing League One football the following season, and following a spell on the sidelines, Liam took up the opportunity to ply his trade on foreign shores.

Gothenburg-based side GAIS, competing just below Sweden’s top-flight, was an exciting – if short – experience, before Davis once again linked up with Johnson at Cheltenham Town in January 2017.

His arrival at Plainmoor ahead of the beginning of the 2017/18 campaign was met with universal approval amongst the Yellow Army, and despite a number of eye-catching performances not being enough to maintain The Gulls’ place in the National League, everything turned to gold the following season, with a fourth spell under Johnson’s stewardship seeing Davis completing a stunning season as United’s only ever-present.

After regaining his place in the side following injury, Davis’ return coincided with one of the team’s best spells of the season. Goals in the 4-2 away at Ebbsfleet, as well as the solitary strike in the 1-0 home win over Wrexham put Torquay amongst the leading pack, before an unfortunate fall in the cup defeat at Maidstone curtailed his season once more.

With Liam’s typically determined attitude towards his rehabilitation seeing him edge ever closer towards first team contention prior to the enforced break though, there promises to be plenty more highlights to come.

Thank you to all our sponsors, including Liam’s Player Sponsors: