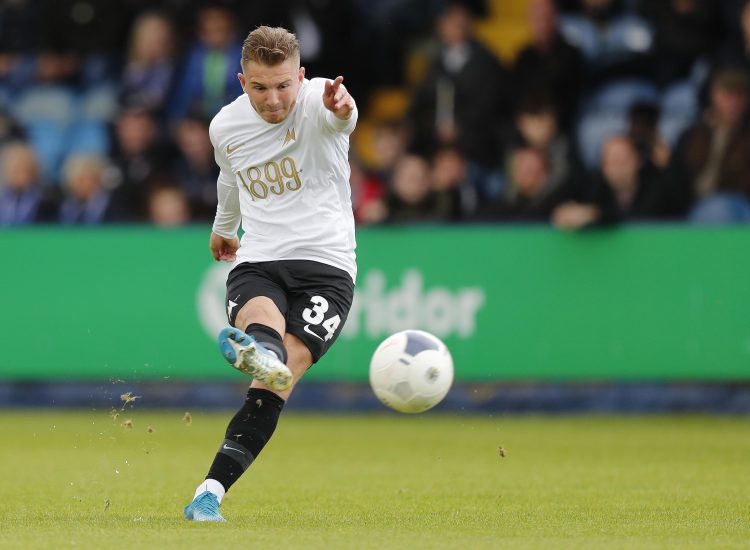 After joining United in early September, Ben Whitfield wasted little time in endearing himself to the devoted Yellow Army.

With Torquay trailing to old foes Woking in a feisty encounter in Surrey, it was Whitfield, whose signing had only been confirmed hours earlier, that emerged from the bench to head home The Gulls’ 79th minute equaliser.

The scenes of celebration that followed amongst the travelling contingent were to be a sign of things to come, with Ben’s energetic performances in attack proving to be one of the highlights of the club’s truncated 2019/20.

Born in Bingley, West Yorkshire, Whitfield served his footballing apprenticeship in his home county with Bradford City, Silsden and Guiseley before his obvious potential caught the attentions of AFC Bournemouth.

A four-year spell with The Cherries saw Ben begin to deliver on his early potential, with loan spells at Kidderminster Harriers, Yeovil Town and Port Vale providing him with the opportunity to display his talents at first-team level.

Always eager to make a positive first impression, a goal on his senior bow for Harriers at Altrincham in October 2015 paved the way for an excellent debut campaign with the National League side. Worthy recognition for his contribution to cause was to come at the end of the season, as he scooped two Player of the Year awards following 29 appearances and 6 goals.

2016/17 saw Whitfield gain more valuable experience, this time in the Football League, with a season-long spell at Yeovil Town producing 42 matches – and 3 goals to boot.

With Bournemouth’s rise to the Premier League seeing a number of expensive new recruits blocking his path to the senior squad, a temporary move to Port Vale enabled Ben to rack up more games at League 2 level, before his departure from the Vitality Stadium in the summer of 2018 signalled a permanent move to Vale Park.

With The Valiants finishing 20th for the second-successive season, Whitfield’s committed performances once again saw him stand out amid a struggling side, and in the process gain the adulation of the home supporters. Having become a real fans’ favourite, it was therefore somewhat surprising when he was released just a month into 2019/20.

With 73 appearances and 8 goals clocked up during his two-year stay in Staffordshire, Ben no longer had anything to prove, and it was Torquay boss Gary Johnson who acted quickest to complete the signing of Whitfield prior to the trip to Woking last September.

The next six months would see him prove a constant threat to opposition backlines, either out wide or centrally, with his tally standing at 31 appearances and 7 goals before proceedings were curtailed in March.

Proving to be a vital – not to mention versatile – addition to Johnson’s squad, it was met with relief and delight in equal measures by the club’s fanbase when the 24 year-old agreed to a new deal with the club earlier this month.

Having settled into life at Plainmoor with ease, Ben is now relishing a return to action in 2020/21…

National League defences – you have been warned!

Thank you to all our sponsors, including Ben’s Player Sponsors: