Despite a battling performance, United’s winning run came to an end at Meadow Lane on Saturday, as Notts County secured a 2-0 win.

A long-range effort from Richard Brindley saw County take an early lead, and a second just after the break through Kristian Dennis was enough to seal the victory for the hosts.

It was no surprise that Gary Johnson stuck to the same starting line-up that had secured three successive victories, with the only change coming on the bench. Club captain Asa Hall made a welcome return to the  matchday squad amongst the substitutes in the place of Ruairi Keating.

After a cagey start in which both sides enjoyed brief spells of possession, County took the lead on eight minutes.

A home corner was half-cleared, but the clearance fell kindly to full-back Brindley, who rifled home through a crowd of players from 30 yards.

That goal gave the home side an obvious lift, and for a spell thereafter, United were second-best in the possession stakes. The Magpies though, failed to press home their territorial advantage and as the half wore on Torquay began to impose themselves on the game.

A 12th minute Jake Andrews free-kick may have been well covered by Sam Slocombe in the Notts’ goal, but it did at least provide evidence that in a half of few chances, one moment of quality was all that was required to draw the teams level.

County were being largely well-marshalled by The Gulls’ backline, with a Kyle Wootton header from a Sam Shields cross the only real chance as the game ticked past the half-hour mark.

There was one more moment of concern for United five minutes before the interval, as a long throw left home forward Dennis with a presentable chance in front of goal. To the Yellow Army’s relief though, the ball soared over the bar.

At the halfway stage, the score remained in favour of the men from Nottingham, however Johnson’s side were very much still in the match. 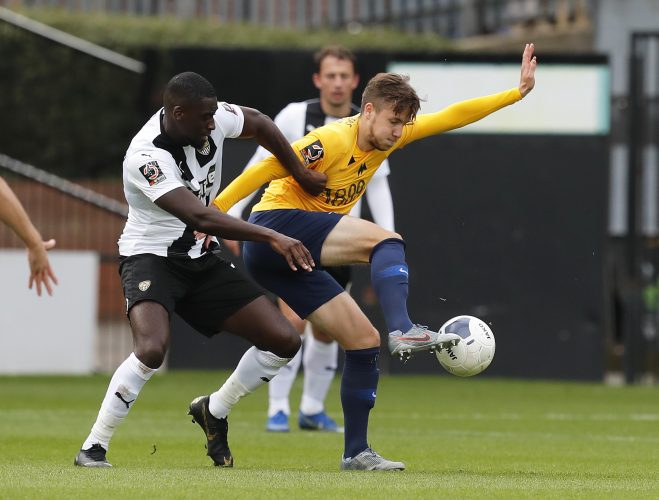 United would have been looking to put the home side under pressure in the early stages of the second period, however it started in the worst possible fashion for them, as Shield’s free-kick found Dennis in space to double the advantage in the 48th minute.

With Meadow Lane now in full voice, Torquay were up against it, as County took a firm grip on proceedings for the first time.

It is to their credit that they didn’t fall further behind, and following the introduction of Manny Duku and Armani Little from the bench, The Gulls begin to trouble their opponents, and in the 72nd minute they came within inches of pulling one back.

After initially seeing a free-kick break down, Kalvin Lumbombo-Kalala, who had been closely marked all afternoon, managed to spring free of his marker, and in the goalmouth scramble that ensued, Kyle Cameron saw his close-range effort cleared off the line from Brindley.

That chance sparked Torquay’s best period of the game as they put the home side under sustained pressure, but unlike last Saturday, United were unable to rally with a late goal, and the home side saw out the final stages to claim all three points.