Two second-half strikes saw United claim their first away win of the season against Dover at the Crabble Athletic Ground.

Second half headers from Asa Hall and Jamie Reid put Gary Johnson’s men in a commanding position, and despite Hall’s late red card, Inih Effiong’s penalty proved little more than a consolation for the home side.

United made two changes to the side that went down 2-0 to Maidenhead at Plainmoor on Tuesday, with Lucas Covolan Cavagnari replacing Shaun MacDonald in goal, and Liam Davis making his return from injury at the expense of Frank Vincent. Momodou Touray also joined the matchday squad for the first time, with Manny Duku dropping out.

In a first half of few chances, United did a good job of restricting the hosts.

A second-minute intervention from the returning Davis denied Dover an early opportunity, and from there Johnson’s men began to impose themselves on the game.

Unfortunately though, the final ball was missing, and despite a couple of promising runs from Connor Lemonheigh-Evans and Kalvin Lumbombo-Kalala, Lee Worgan in the Athletic goal had little to trouble him between the sticks.

Midway through the half, Jai Reason fired one effort over the bar from 20 yards, and although Bilel Hinchiri struck from a similar distance three minutes before the break, debutant Covolan was equally untroubled as the game reached the interval. 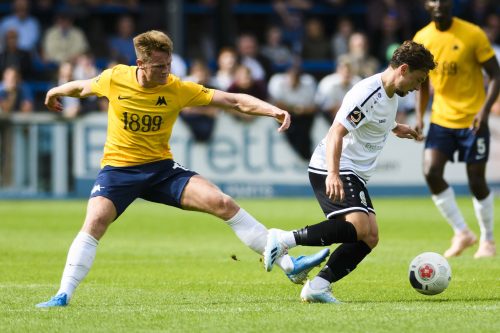 The hope, from The Gulls’ perspective, was that if United could improve their final ball, their resolute defending would give them a platform to build on during the second-half.

United wasted little time in putting that theory into practice. 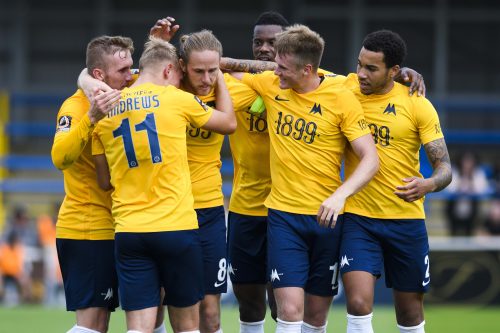 GOAL! Asa Hall of Torquay United celebrates with his teammates having opened the scoring during the Vanarama National League match between Dover Athletic and Torquay United at The Crabble Stadium, Dover, Kent on the 17th August 2019. [Photo: James Fearn/PPAUK].

After winning a corner through Connor Lemonheigh-Evans in the 51st minute, Jake Andrews’ corner was met by captain Hall at the far post, who headed United in front.

Two minutes later, and it got even better, as Andrews produced another wonderful cross onto the head of Reid, who doubled Torquay’s advantage.

With a two-goal lead, Johnson’s men began to play with the freedom and confidence they pride themselves on. 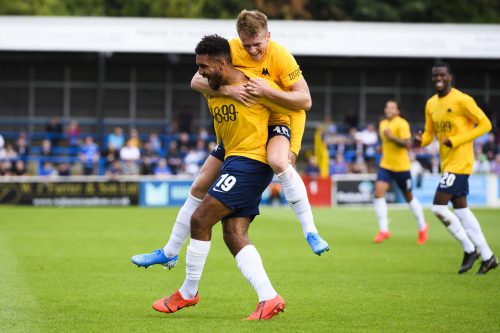 GOAL! Jamie Reid of Torquay United celebrates with Armani Little of Torquay United having scored to double the advantage during the Vanarama National League match between Dover Athletic and Torquay United at The Crabble Stadium, Dover, Kent on the 17th August 2019. [Photo: James Fearn/PPAUK].

The home side were still a threat on the break, with Will De Havilland serving notice of that with a header that went narrowly wide from a corner of their own.

It was far from a backs-to-the-wall situation though, with Armani Little, Lemonheigh-Evans and Andrews all going close to adding a third.

Athletic substitute Nassim L’Ghoul visibly lifted the hosts, and gave the Torquay backline some added energy and trickery to contend with.

One fine through-ball saw him release Effiong in the 72nd minute, but the imposing striker fired wide when well-placed.

Just when it looked like United were seeing the game out with relative ease, a dramatic late twist threatened to change the course of the three points.

With two minutes remaining, Hall was adjudged to have handled the ball on the line, resulting in a red card for the United skipper, and a penalty for the home side.

Effiong stepped up and fired into the net to throw his side a late lifeline.

To their immense credit though, Johnson’s men held firm and when De Havilland headed over deep into stoppage time, Dover’s chance to regain parity had gone.

The result was a huge boost for United, who now have a week break before the BT Sport cameras roll into Plainmoor next Saturday for the visit of Aldershot Tow. Ticket information and further details are available here.