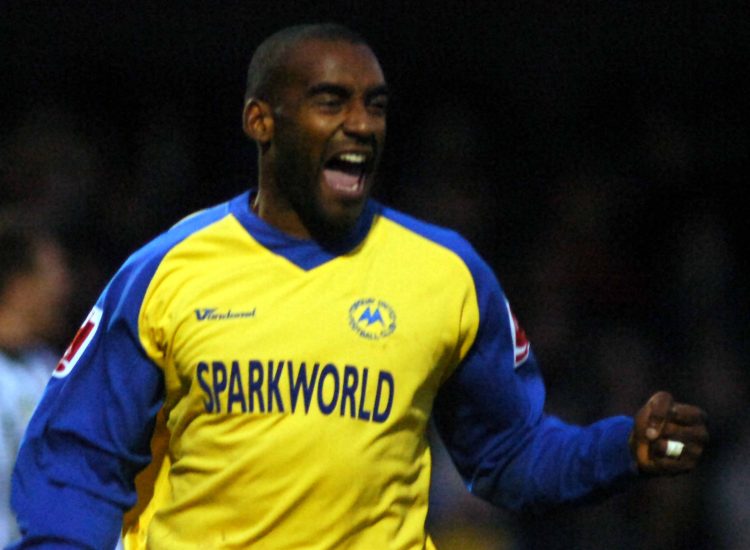 Only a handful of footballers will make Football League debuts for their clubs at the age of 16, and even fewer will then go on to be awarded a testimonial by the same club a decade later.

For Tony Bedeau though, those remarkable achievements are just two highlights in a professional career that was spent almost entirely at Torquay United.

Shepherd’s Bush-born Bedeau was released as a teenager by Premier League giants Chelsea, before a call from former United scout John James paved the way for his move to Plainmoor, as Tony explains.

“I got a call from JJ, asking me to come down to Torquay. I came down for a trial for two weeks and met Paul Compton, who was coach at the time. I did quite well, liked the area and I stayed down.”

Making his name as a promising striker during a golden era for the club’s youth team, it wouldn’t be long before Bedeau made his first-team bow, as he emerged from the bench during a 0-0 draw at Cardiff City’s Ninian Park.

Further senior experience continued to come Tony’s way over the next two years, with the pacy frontman crowning his final year as a trainee by netting his first goal for the club in a 2-1 defeat in Doncaster on the last day of the 1996/97 season.

Alongside fellow graduates Matt Gregg and Wayne Thomas, it was no surprise when he was awarded his first professional contract under Head Coach Kevin Hodges, with an upturn in The Gulls’ form providing Bedeau with more first-team action, and goals, culminating a surprise appearance at the old Wembley Stadium in the Division Three Play-Off final.

“That was a bit of a surprise to be honest, to play at Wembley at that age was quite a big buzz.”

A change of management in the summer, along with the departure of striker Rodney Jack, gave Tony the chance to establish himself as a regular in the starting XI, and he repaid the faith shown in him by new boss Wes Saunders.

“Wes just told me to go and play my game, and that was just what I wanted to hear really. By telling me to go out, have fun, and play football, it took the pressure off.”

10 goals in 1998/99 was followed by 17 the following season, as an entertaining Torquay side came within a whisker of snatching a play-off place. Unfortunately Bedeau’s opening goal in the final day clash against Northampton at Plainmoor was soon cancelled out, with a 2-1 defeat ending their Division 2 hopes.

A couple of seasons of struggle failed to diminish other club’s interest in United’s main goal threat. Sheffield Wednesday, Oxford and Rochdale all having bids rebuffed, whilst a trial at Sunderland and loan spell at Barnsley was further proof of Tony’s obvious potential.

The arrival of Leroy Rosenior in 2002 would see Bedeau’s pace utilised as a right winger, with the switch of position bringing United success, as well as earning him international recognition with Grenada, alongside another former Gull in Jason Roberts.

“It was a bit different, but I was just glad to be playing to be honest,” he recalls.

“Because of my energy levels, Leroy suggested playing me on the right wing, and from that position I saw more of the ball was involved in more of the play, and it worked out well for me.

“My dad is from Grenada, so I was called up to represent them and it was a good experience. I spoke to Jason Roberts about it, and I played home and away qualifiers against USA. It was a different way of life out there and it was ridiculously hot in training, but it was good fun!”

A key part of Rosenior’s side that earned automatic promotion in 2003/04, the club were unable to hang on to their League One status, however his commitment to the side was recognised in 2005 with a testimonial against Plymouth Argyle at Plainmoor, marking an unbroken ten-year spell at the club.

11 goals made him top scorer in the season that followed, and played a large part in helping United retain their Football League status. The end of the campaign though, would see Tony opt for pastures new in the shape of a move to Walsall, before returning to Plainmoor for a 12 month spell under Paul Buckle in 2007/08.

“I got injured at Walsall, so didn’t get off to a good start and never really settled. I then came back to Torquay, played quite a few games, and there were a good set of lads there.

“I love Torquay, I grew up from the age of 16 and became a man there. I met people inside and outside the club who warmed to me, and the fans were good to me too. I’ve come down to play a couple of games since, including a reunion match a couple of years ago, and I’m hoping to come down to watch a game at Plainmoor again soon.”