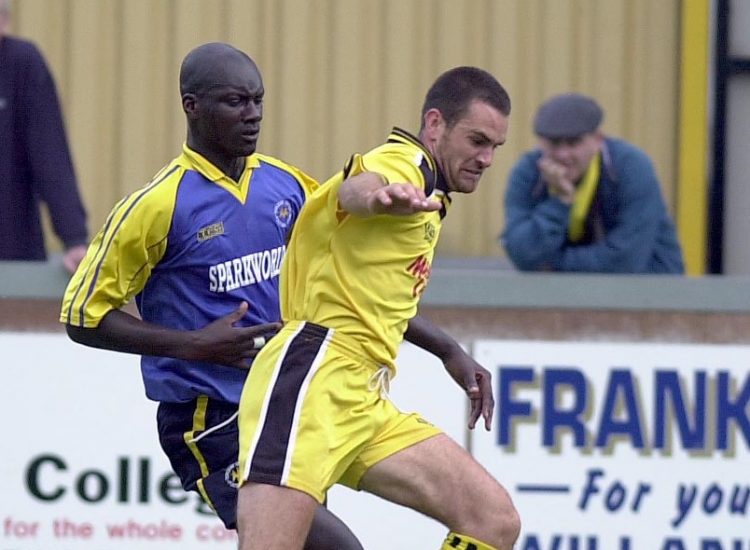 In the latest of our feature celebrating some United favourites of the past, Jimmy Aggrey recalls his time at the club.

Back in October 1998, young defender Jimmy Aggrey made his way down from London to Plainmoor for a trial, as his quest for first team football continued. It was Gulls player Robbie Herrera who was the initial link between the two, with Torquay’s left-back having been a teammate of Aggrey’s during their time together at Fulham.

Despite both players initially appearing to figure in previous boss Ray Wilkins’ plans at Craven Cottage, the arrival of Kevin Keegan as Fulham manager saw both players looking to further their careers in Devon, rather than the capital. It was a particularly testing time for Jimmy, who had been looking forward to 1998/99 being his breakthrough season.

“It was ironic as Ray, who was fantastic, offered me to come in and sign a new contract,” recalls Aggrey.

“The next day he was sacked and I was told I was surplus to requirements. I was gutted, because I had been training with good players like Chris Coleman, Rufus Brevitt, Steve Hayward, Paul Peschisolido and Robbie, who was a good friend of mine. Torquay brought him back, and he said to me ‘Why don’t you come down and train down in Torquay?’, and so I did.”

The move saw the towering defender link up with another London-born player who had made the English Riviera their new home.

“I’ve known Tony Bedeau since the age of 12. We go back to the time we were playing against each other for our Sunday football teams, and we also played for the same Borough and County sides. He was a good friend of mine, and we’re still close.”

Training went well, resulting in Jimmy being offered an initial one-month contract by then manager Wes Saunders. Following an impressive display in a 1-1 draw at Scarborough, the young centre-half grew in confidence, and was eventually rewarded with a long-term deal to remain at Plainmoor.

“I trained and signed a short-term contract. It was a good period, it was a time when I needed to be somewhere I was wanted. I wanted to play football, and I believed I had the ability to play.”

Despite making a name for himself in the centre of The Gulls’ backline, Aggrey always felt he was more suited to a role further forward.

“I wanted to play football but as a kid, I was a midfielder. I learned to be a centre-half at Fulham. If you were tall you were told to go at the back, but I always felt my feet were more blessed than my head. I was more offensive than defensive.”

With United retaining their Football League status with something to spare during his first season, 1999/2000 saw some fresh talent brought into the side, resulting in a youthful team that was looking up the table, rather than down.

“We had a lot of young players in the squad – The likes of myself, Tony Bedeau, Steve Tully, Kevin Hill, Chris Brandon, Ryan Northmore and there were others. On one occasion that season, we went to Barnet and won with a team that had an average age of about 22!”

The more Jimmy played, the stronger the bond between him and the club’s devoted supporters became, with The Yellow Army revelling in his committed displays. The 2000/01 campaign may have been difficult one for the club, however the fans gave United’s No.7 the ultimate accolade by voting him as their Player of the Season.

“I wanted to go forward and show the crowd I had some ability on the ball, but I had a great partner in Lee Russell, who was like my mentor at centre-half. I learned so much off him.

“I was very appreciative of the fans for the faith they had in me, and the club as well. I was on the transfer list, but it gave me more of a drive to do it for myself, the fans and my teammates because I wanted another contract. I was worried the fans would turn on me, but they didn’t and I was humbled by that.”

The final game at Underhill has been written about many times since that epic afternoon, however in Aggrey’s eyes, it was the uniting of Torquay’s players and fans that helped pull the club through that do-or-die scenario with their League status intact.

“What gave us the lift was our fans behind the goal,” he recalls.

“They were in trees – It was like a David Attenborough documentary! To see all those Torquay fans come from Devon up to Hertfordshire, which is an awkward place to get to, was incredible. It gave us a duty of care to get that result.”

Despite receiving the acclaim of United’s fans just a few short months earlier, a change in management the following summer signalled the end of Jimmy’s eventful spell with the club. There were other notable achievements after Plainmoor, including a spell at Yeovil Town under current Gulls boss Gary Johnson, and a European campaign with Welsh side TNS that culminated in a tie against Manchester City.

However, it is Torquay United, and its supporters, that Jimmy reserves much of his affections for.

“The fans were amazing. They were patient and I was very young. It’s the best changing room and club I’ve been at. There’s been some good ones, but that period was the best. It was a beautiful time in my life.

“I was so appreciative of getting the Player of the Season award. They were the first set of fans that appreciated me, and I gave it my all. I made mistakes, but they forgave me. It could have been me in the crowd but I was lucky enough and blessed to be on the pitch.”