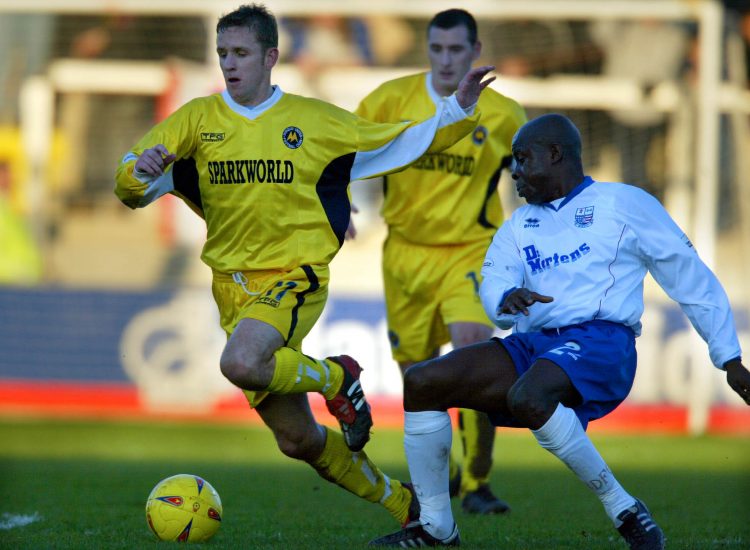 Record appearance holder Kevin Hill talks about his time at Torquay United, a club that remains close to his heart.

During his eleven year stint at Plainmoor, Kevin experienced every emotion in football – promotion, relegation, and a few near misses of both along the way too.

On his way to making an unequalled 474 appearances for The Gulls, Hill played in almost every outfield position, a testament to his commitment to the cause in a Yellow shirt.

After joining Kevin Hodges’ side following a successful trial back in 1997, the former Torrington Town player wasted little time in establishing himself as a firm favourite with the Torquay faithful.

“I was working at a Normans supermarket back in Budleigh where I lived,” recalled Kevin.

“I was only allowed two weeks off work whilst everyone else had a six week pre-season, but Kevin Hodges and Steve McCall [Assistant Manager] took a chance on me and I ended up going up to Macclesfield on the first day of the season – and that was it!”

The 1997/98 season lives long in the memory of both United players and supporters, as The Gulls surprised everybody by securing a Division Three play-off place, with Hill playing a crucial role in the team’s success.

“It was great for me, it was all new. I started a few games and then came out for a few, but by the end of the season I had managed to score seven goals.

“We had some experienced players like Gary Clayton and Chris Leadbitter, along with the likes of Paul Gibbs, Rodney Jack, Tony Bedeau and Jason Roberts. It was a brilliant team.”

Three years later though, United would face a very different battle at the other end of the table, as Torquay headed to Underhill to face Barnet on the last day of the 2000/01 season, knowing a point would save themselves – at the expense of their London rivals.

Once again, Hilly rose to the challenge – quite literally in fact – as he soared highest to head home United’s second goal to help secure his side a 3-2 victory, and with it, their Football League status.

“All we needed was a draw, but there’s nothing worse than preparing for a game not to lose.

“There were people climbing trees to watch the game, you came off the bus and Sky Sports were in your faces, I don’t think it had ever happened before.

“We went 1-0 up through Jason Rees, and 2-0 up when I scored from a corner we had worked on all that week. Then Stuart Jones saved a penalty, before we went down the other end, and David Graham made it three!

“It was a backs-to-the-wall second half. There was an own goal, and they scored a second with 14 minutes to go. When the final whistle went, it was just relief – it felt like winning the league.”

After that relegation near-miss, the club rebuilt, with gradual improvement over the next three seasons culminating in an unforgettable 2-1 win against Southend at Roots Hall to seal automatic promotion to the newly-named League One.

Under Leroy Rosenior, he continued to be one of the first names on the team sheet, with his versatility proving invaluable during the Head Coach’s three and a half year spell in charge. Kevin’s key asset was arguably his incredible aerial prowess, despite never being the tallest member of the squad.

“Everyone knew their job under Leroy, but I remember him saying to me that whoever was missing, I would fill in for them. At one stage I was playing up front as a target man with Jo Kuffour, and despite my height, I ended up with seven goals during that spell.”

Difficult times out on the pitch eventually resulted in United losing their League status in 2007, however Hill displayed typical loyalty in remaining with the club.

Although no longer a first-choice under Paul Buckle during the club’s first season in the Blue Square Premier, the Yellow Army would still see one of their favourite sons bow out in style. After netting in his Plainmoor finale against Exeter in the play-off semi final, he then emerged from the substitutes bench in the FA Trophy final at Wembley to break Dennis Lewis’ record, set nearly 50 years previously.

“I knew just before Christmas I would be going, but I made it clear I would continue to give 110% whilst I was at Torquay.

“I played a few games, including at centre-half alongside Mark Ellis, and scored the winner against Weymouth. After missing out on playing at Wembley in my first season, I just wanted a run-out to try and score and help us win.”

Now manager of Western League side Exmouth Town, Kevin is still held in high regard by United’s supporters, and his affection for the club where he played his entire professional career is clear for all to see.

“The club and fans were fantastic to me.

“The fans had a song, and everyone knew what I was about. I could play a bit, but I wasn’t like Jason Fowler or Alex Russell. I was in the team to do a job. I don’t go on social media much, but I read the comments about me, and it feels good.

“I knew I could run, I was fit, I was good in the air and would pop up with the odd goal. Goalkeeper’s kicks would always be aimed for me and I would flick the ball on. It was those little attributes that were important, and that’s what I tell my players to do now – just do what you are good at!”