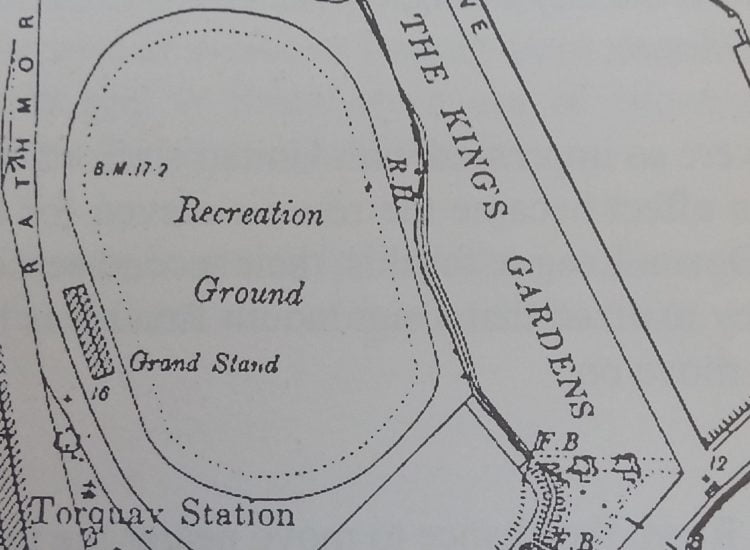 Having begun to win over the affections of the Torquay public, the club were in a decent position following the completion of the 1903/04 East Devon League campaign.

Any celebrations to mark the club’s 5th anniversary were soon put on hold though, as the club were dealt two major blows to halt its progress.

The club’s Recreation Ground home on the seafront had recently undergone quite a facelift, with a number of improvements having taken place at the town’s expense. Those renovations had unsurprisingly seen the site become much sought after by other sporting establishments within the town.

One such party, Torquay Athletic Rugby Club, were eager to make the ground their new home, and prepared to pay rent far higher than United’s restricted finances would allow. After submitting their applications, it was no real surprise when the council ruled in Athletic’s favour, leaving the ground’s previous tenants homeless.

This decision was to have far-reaching implications for the club.

Desperately seeking a new ground, farmer John Wright once again came to United’s aid once again with the offer of the use of his fields. Although obviously grateful at having a venue to play their fixtures at, with no real spectator or changing facilities, the ground failed to meet the minimum standards set out by the East Devon League, leaving Torquay with no option but to withdraw from it.

Having no league to play in was a huge blow for the club, especially as two other local sides, Ellacombe and Babbacombe were already beginning to threaten United’s status as the Town’s top team.

With the two rival sides competing for Torbay and District League supremacy, the local public began to question as to whether the three clubs’ resources would be better served supporting one merged club. That argument though, would have a little way to run yet.

Faced with a season of friendlies for the first time since their inaugural campaign, the club’s only competitive fixture came in the shape of the East Devon Cup, however United failed to rise to the occasion as they were humbled 8-0 at home by familiar foes, Dawlish.

Whereas friendly encounters had previously brought the team a measure of comfort against lesser opponents, the results throughout 1904/05 were decidedly mixed.

An opening day 5-0 defeat at Exeter City was to be expected, however after conceding a further 13 goals in their next three fixtures, United could have been forgiven for questioning whether things had run their course.

To their credit, the club showed enough resilience to see a difficult season through, with a 5-1 victory over Brixham in October providing the team with their first win of the campaign.

Wednesday, 16th November, 1904 provided the club with another much needed boost. Plymouth Argyle, who had turned professional a year earlier, agreed to play United in what was billed as the first ‘professional v amateur’ match to take place within the town. The scoreline may have been a tough one to take, as Argyle triumphed 13-2, however it was hardly a shock. The Pilgrims would go on to become the 1904/05 Western League champions later that season. Founder member Bill Luscombe would later recall that over a thousand spectators attended the occasion – a far cry from just a few years earlier, when Torquay would often play in front crowds amounting to double figures.

Torquay also took on sides representing both Babbacombe and Ellacombe throughout the year, with vastly differing results. The home match against Babbacombe saw United run out 8-0 winners in early November, before completing the job with a tighter 2-0 away win in mid-April. Ellacombe though, were a much tougher nut to crack. A goalless draw at home in late September preceded a 2-1 defeat in the return match in February..

A 1-0 defeat at Paignton in late April rounded off a difficult season in disappointing circumstances, however with the use of Torquay Cricket Club’s facilities secured for the upcoming campaign, the side could at least look ahead to competitive fixtures once again.