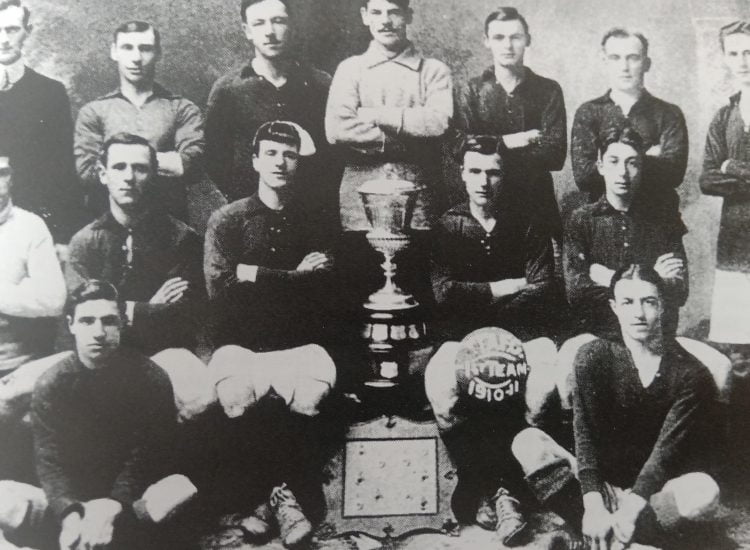 With Torquay United and Ellacombe finally joining forces to form Torquay Town following the completion of the 1909/10 campaign, the new season was anticipated with much excitement.

Having secured the lease of Ellacombe’s previous home, Plainmoor, Town took their place in the Plymouth & District League for 1910/11 alongside co-tenants, Babbacombe. Amongst their opponents during their first season were the reserve sides of Devon’s professional sides, Plymouth Argyle and Exeter City, representing quite a jump in class from United’s previous league.

With 24 league fixtures guaranteed, and two excellent cup runs on the horizon, mass mid-season friendlies were to be a thing of the past.

The opening day of the season saw Town make the perfect start with Cudlipp and Evans scoring in a 2-0 home win over St. Austell.

One of a number of players to cross over from Ellacombe to the newly formed club, Crad Evans had represented Wales at amateur level, and would go on to establish himself as the team’s main goal threat over the next few years.

Successive away defeats against Exeter City Reserves (1-5) and Royal Marine Light Infantry (1-2) followed, before a 2-2 at Tavistock gave Town their first point on the road.

The next match would see Town make their debut in the most famous of competitions – The FA Cup. As Torquay United, cup runs were almost unheard of, however the amalgamation seemed to spark an immediate change in fortune, as their trip to Plymouth based side, Green Waves, in the 1st Qualifying Round, saw Torquay emerge as 2-0 victors.

A return to league action saw the side record a comprehensive 5-2 win over Sherwood Foresters, before cup action again took precedence during October & November.

Town appeared to have lost their chance of FA Cup progression after a 1-1 draw against Branksome Gasworks at Plainmoor, however despite holding home advantage in the replay four days later, Branksome were unable to break down their opponents’ resilient defence, with Torquay taking their place in the next round, courtesy of a 1-0 win.

There was to be further cup joy in their next competitive match, with Town again triumphant on the road in the Devon Senior Cup. This time, a 4-2 win over RN Barracks saw them secure a quarter-final berth in the competition.

With the side rapidly becoming cup specialists, it was almost expected that Torquay would beat Boscombe in their FA Cup tie at Plainmoor, and so it proved, with Simmonds delivering the solitary goal to see the team through to the 4th Qualifying Round, where they would meet Oxford City.

City, who had won the FA Amateur Cup four years earlier, would be no pushovers, especially with home advantage. Town though, played up to the occasion, and secured a 2-2 draw thanks to brace from Meager. The replay at Plainmoor belonged to Town though, as two goals from Singlehurst, and one from Evans clinched a 3-1 win, leaving the team just one match away from a place in the First Round Proper.

Standing between Town and a shot at one of the big guns was Accrington Stanley, a side which was destined to join the Football League a decade later. Despite their best efforts in Lancashire, it was to prove one step too far for Town, as they bowed out 4-0.

As is so often the case with cup runs, Torquay appeared to suffer something of a league hangover, with their next two matches against Plymouth Argyle Reserves and Millbrook ending in 3-2 away defeats.

However, with two matches in 24 hours scheduled on the 26/27th December, Town roused themselves to produce two marvellous performances in front of their own fans at Plainmoor. First, groundsharing rivals were humbled 3-0 on Boxing Day, before Evans grabbed all four goals in a 4-0 demolition of Argyle the following day.

The two Matches against Oreston Rovers either side of the new year saw both sides exchange home wins, before cup action resumed on 14th January. With opponents Plymouth still smarting following their embarrassing defeat three weeks earlier, Town proved it was no fluke by registering a 5-1 away win to seal their place in the Devon Senior Cup’s last four.

Unlike their cup form, Torquay’s league form was inconsistent, with away losses at Looe (2-4) and Torpoint (0-1) being promptly dispelled by two rampant victories, firstly against St Austell (6-0), before the Looe defeat was amply avenged by a 7-0 scoreline.

Plainmoor wins over Exeter City Reserves (3-2) and Babbacombe (2-0) just about kept league interest intact, however with Town facing Sherwood Foresters in the semi-finals of the Devon Senior Cup, a place in the final was now within touching distance.

The League match at Foresters had ended goalless a fortnight earlier, however there was to be much more excitement in the cup encounter, as both sides battled it out for supremacy. Despite facing yet another trip away from home, it was Town who eventually prevailed 3-2 to secure their place in the final.

The final, against Royal Garrison Artillery at Home Park, was to prove even more competitive. Looking to become only the second side outside of Plymouth to win the trophy, neither team could be separated in the first two games, with the 1-1 and 0-0 scorelines prompting a second replay.

On the 26th April 1911, the destination of the cup was finally decided, with two goals from Meager settling the match 2-0 in Town’s favour.

A 5th placed league finish, FA Cup heroics and Devon Senior Cup winners, all in the space of a season – It was quite an introduction from Torquay Town!