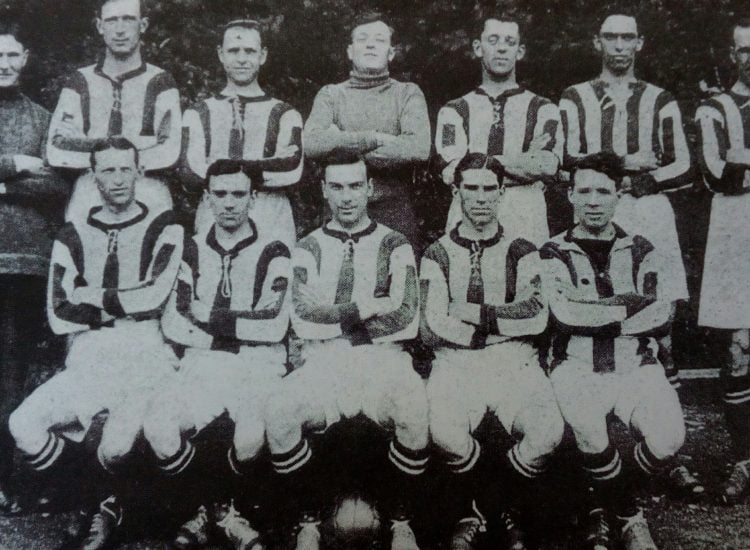 After being accepted into the Southern League at the second time of asking, Crad Evans’ United side finally had a league to match their recently acquired professional status. With the English Section containing 20 teams, mid-season friendlies became a thing of the past, whilst fixtures against the full-strength sides of Boscombe, Bath and Yeovil, as well the reserves from the likes of Bristol City, Portsmouth, Coventry and Norwich represented a huge jump in class compared to previous campaigns.

Having won the Devon Senior Cup without conceding a goal in 1921/22, there would be no defence of their title, with the club entering the Devon Professional Plymouth Argyle and Exeter City instead, whilst Torquay’s FA Cup participation would begin at the Preliminary Round stage.

August 26th represented the earliest start to a season in the club’s history, with Boscombe returning to Plainmoor some nine months on from their FA Cup clash at the same venue. The result was much the same, with a 1-0 win for the visitors spoiling United’s debut at their new level.

The Magpies, as the club were then known, responded well to the initial setback though, as they recorded a 3-2 win over Luton Town’s Reserves four days later. This result was swiftly followed up with a 3-0 home success over Watford, as Torquay eased into their new surroundings.

Following a 1-0 reverse against Portsmouth Reserves at Plainmoor, there was a spot of fixture congestion in mid-September, with United playing no less than five matches in an eight day period, with three away trips in the league against the reserves of Bristol City (0-1), Plymouth (2-1) and Watford (0-2) preceding a 3-0 home victory over Clevedon in the FA Cup, before a frenetic period ended with Bristol Rovers Reserves leaving Devon victorious (0-1) on September 23rd.

One final match in a packed month saw Evans’ team register their biggest win over the season, with a 6-1 win over Bath City confirming the club had nothing to fear at these rarefied heights.

There was to be no glorious FA Cup run this year, as their FA Cup match at Welton Rovers ended in a 3-2 defeat, however back-to-back league wins on the road at Brighton Reserves and Guildford United – both by a 2-1 scoreline – did make up for that disappointment somewhat.

In stark contrast to two months earlier, only two league matches took place in November, as Torquay took on Norwich City Reserves in home and away fixtures. Both matches went the way of the hosts, as The Magpies avenged a 1-0 defeat against The Canaries with a 3-1 triumph at Plainmoor the following weekend.

The pattern then replicated itself against Swindon Town’s 2nd XI at the beginning of December (0-1 away, 2-1 at home), before United headed into Christmas with successive away draws at Exeter Reserves (0-0) and Coventry Reserves (3-3). The final match on 1922 provided the club with another highlight, with a 3-0 home win over Plymouth Reserves clinching a pleasing double over their rivals.

An inconsistent start to 1923 stalled any thoughts of a title push though, with a 4-0 home thrashing of Brighton Reserves preceding three winless games against the seconds of Luton (1-1 at home), Portsmouth (0-1 away) and Bristol Rovers (2-2 away).

With such pleasing results against a number of Football League clubs’ reserve sides, and the gap between United and their fellow Devon professional outfits clearly diminishing, the club’s aspirations to join Plymouth and Exeter in Divison 3 South were no longer seen as far-fetched. Those hopes received another welcome boost at the end of January, as the club recorded a superb 1-0 away win over Exeter City’s first-team in their Devon Professional Cup debut, to clinch a place in the final against Plymouth Argyle. The Pilgrims’ full strength side would ultimately prove just too strong though, as they emerged with the trophy following a 2-1 win two months later.

With Torquay’s eye-catching home form turning Plainmoor into something of a fortress, February began with a 1-0 win over Millwall Reserves, before The Grecians were put to the sword once again three days later, as The Magpies handed out a 4-0 beating to their second-string. Unfortunately United’s record on the road was not so impressive though, with three defeats beginning against Southend Reserves (0-1) Millwall (0-1) and Yeovil & Petters (3-4) only punctuated by another impressive home success against the latter (4-1).

Backed up by a continuation of their excellent results at home, the Southern League run-in saw Evans’ side finish strongly, as they suffered just one defeat in their last ten matches. Home and away wins against Reading Reserves (4-0 home & 2-0 away) were followed up by a suprb 2-1 victory at home eventual champions Bristol City Reserves, to make it three wins on the bounce at the end of March.

Although two goalless encounters at home Southend Reserves (home) and Boscombe (Away) failed to set pulses racing, there was plenty of action in the next two clashes at Plainmoor, as Coventry Reserves were downed 3-1 before Guildford left Devon with a 2-2 draw.

Torquay’s only league defeat during this period came in the following game on April 21st, as Southampton’s Reserves ran out 3-0 victors in Hampshire. United would have the last laugh though, wiith a 1-0 over the same opponents in their last home match. That result, combined with a final day 1-1 draw at Bath City, saw the side clinch a highly-creditable 6th place finish.

Boosted by sucha  confident showing in their first season as a professional outfit, the club’s hierarchy decided to make an application to join the Football League at the end of the season. The move took many by surprise, and unfortunately the bid didn’t appear to be taken seriously by the League, with not a single vote polled in their favour. Instead, it would be 2nd-placed Boscombe who would make the step up, whilst Torquay United would have to wait a little while longer.