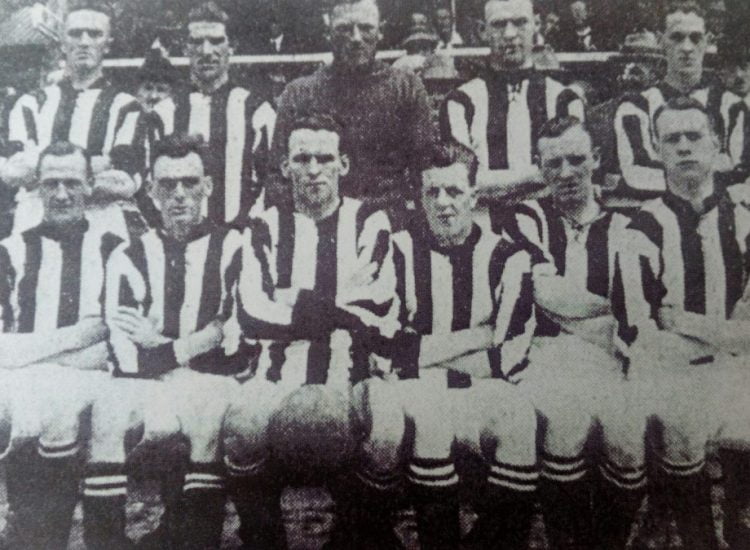 After just about emerging from the previous season intact, Torquay United once again took their place in the Western Section of the Southern League, however as if to illustrate how different things could have been, only 13 other sides took their places alongside The Magpies as things got underway in August 1925.

With only 26 league fixtures scheduled, United also took up the option of entering a side into the Western League, having briefly resided there during 1921/22. The 18 matches this produced, along with extra possibilities in the cups, kept things competitive for the side right up until the end of April.

There was another change in Plainmoor hotseat, with South African-born former Halifax left-back Percy Mackrill replacing F.G.B. Mortimer as the club’s new player-manager.

Leading from the front, it was Mackrill who netted United’s first goal of the season, albeit from the penalty spot, in their opening day Southern League 2-1 home defeat against Plymouth Argyle. The beauty of playing in two divisions was that it provided clubs with ample opportunities to settle scores, and Torquay certainly took their chance by beating The Pilgrims just two days later in their opening Western League fixture at Home Park.

Not only did that victory represent an excellent result in its own right, but it was also a dramatic improvement on their previous two fixtures against the same side, both of which ended in seven-goal defeats.

United displayed markedly different fortunes in the two league competitions early one, with the Southern League initially proving a much more difficult prospect. The Plymouth win in the Western League was swiftly backed up by goalless draws against Swindon Reserves & Yeovil prior to an exciting 4-2 home win over Bath, before Taunton eventually ended their promising start at Plainmoor (1-2).

That promising beginning was in stark contrast to their Southern League form, as a winless spell against the seconds of Exeter (0-1 at home and 2-2 away), Bristol Rovers (1-1 away) and Swindon (2-2 away), followed by a 7-1 capitulation away to Ebbw Vale, made it seven matches without success.

Arguably the team’s best performances in the opening months came in the FA Cup, as Mackrill’s men made it all the way through to the 1st Round of the competition.

A Preliminary Round 5-1 home win over Green Waves set the tone, before three successive away victories at Taunton (2-1), Kingswood (3-2) and Mid Rhondda (2-1) set up a home clash with Yeovil Town in the 4th Qualifying Round. With a place in the main stages at stake, goals from Morgan, Appleyard and Pither secured a memorable result, with Torquay drawn to face Third Division Reading at home in the next round.

A famous occasion saw United put on a marvellous display in front of around 6,000 spectators at Plainmoor, with the side fully deserving another shot at their Football League opponents. The replay at Elm Park was equally competitive, as The Magpies replicated the same result. With extra-time failing to produce a winner, a second replay five days later at Ashton Gate was required, however this time it was The Royals who made it through to the Round Two courtesy of a 2-0 scoreline.

With their Devon Professional Cup commitments once again restricted to just the one match – a 2-1 defeat at home to Plymouth in November, Torquay were left to concentrate on their dual league responsibilities for the remainder of season.

December 12th saw Mackrill’s side finally claim their maiden Southern League win of the season, with Bell and Chambers grabbing the goals in a 2-1 victory at Plainmoor. Although a 2-0 home defeat in the Western League match against Yeovil came five days later, Torquay’s fans were soon treated to a double dose of festive cheer at the same venue, with a 5-0 thrashing of Taunton on Christmas Day eclipsed by a 7-2 battering of Bath on Boxing Day, as the team finally began to emerge from the lower reaches of the division.

The New Year would see fortunes fluctuate, as United won three of their four Western League games against Weymouth (1-3 away), Bristol Rovers Reserves (2-0 at home), Exeter Reserves (2-1 away) and Bristol City Reserves (4-2 at home), however their Southern League performances stuttered once more, with draws against Yeovil (1-1 home) and Barry (2-2 away) preceding a 3-1 away defeat at Bristol City’s second string.

February saw some measure of consistency on both fronts, with the sole Western League fixture resulting in a 1-0 at Taunton, whilst six points from four games were gleaned from Southern League outings against Barry (3-0 at home), Weymouth (1-3 away, 4-1 home) and Swindon Reserves (3-1 home).

Now fully into their stride, the penultimate month saw just one defeat inflicted on them, with Yeovil making home advantage count in Torquay’s first match of March (0-1).  A hat-trick of Welsh wins largely made up for that Southern League slip, as United made it six points from six against Pontypridd (6-0 at home), Mid Rhondda (2-1 away) and Ebbw Vale (3-2 home). Their Western League fixtures proved just as profitable, with a goalless draw against Bristol City Reserves swiftly followed by maximum points against Weymouth at home (3-1) and away to strugglers Bath (2-0).

With ten matches on the rota during April, their form did fall a way a bit as the season edged towards its finale, however three points from back-to-back Devon Derbies at Plainmoor against the reserves of Exeter (3-1) and Plymouth (1-1) was enough to confirm a creditable Western League showing, despite successive away defeats at the 2nd XIs of Bristol Rovers and Swindon restricting them to a 3rd place finish.

Torquay’s Southern League campaign ended in much the same manner as the rest of season had been played out, with United unable to string two wins together. A 5-1 away hammering of Taunton preceded a 3-1 home reverse by Bristol Rovers’ seconds, before a 2-1 away win at Bath City was backed up by a heavy 6-3 defeat away to Pontypridd. Although a 1-0 win over runners-up Bristol City Reserves was very pleasing, this was once again followed up by a defeat, as United went down to a 2-0 loss at Plymouth, leaving The Magpies in 6th position.

Although United had been largely inconsistent during the course of the campaign, particularly in the Southern League, the club had won many admirers in footballing circles for their FA Cup heroics, and in twelve months time, the value of that goodwill could not be underestimated.