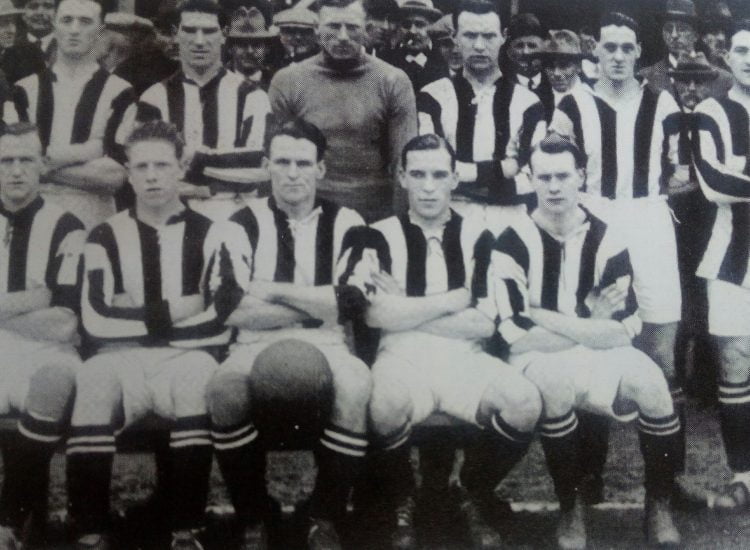 Having barely survived only months earlier, the 1925/26 season provided United with the opportunity to focus on footballing matters once more, however their next campaign was to be the one that finally saw the club’s ambitions realised.

Again under the guidance of manager Percy Mackrill, the team would compete on two league fronts, with the Southern League still comprising of just 14 teams, and the additional league, the Western League, made up of 12 sides. Having won many new admirers with their FA Cup heroics last time out, Torquay were rewarded with direct entry into the 1st Round draw this time, whilst the Devon Professional Cup would again see The Magpies begin at the semi-final stage.

Another late August start saw the club start their Southern League campaign in impressive style, with Taunton United put to the sword by a 4-1 scoreline at Plainmoor. Two more home victories against Weymouth (3-2) and Plymouth Argyle Reserves (4-0) sandwiched the return match at Taunton (1-1), before Torquay’s Western League season got underway on 20th September with a 1-1 draw away to Swindon Reserves.

The same side provided the opposition in their next game at Plainmoor five days later, as United returned to Southern League action with a 2-1 victory, to make it four wins and a draw from their first five matches. A 1-0 away defeat to Bristol Rovers’ second string may have ended that excellent start, however Mackrill’s side were back in business seven days later, as Andrews’ hat-trick helped seal a 4-0 over Exeter City Reserves, prior to attentions temporarily switching back to the Western league again.

Back-to-back triumphs over Weymouth (1-0 away) and Plymouth’s reserve side (3-1 at home) got Torquay’s season underway in that division, before a 3-2 away defeat against the former side was followed by a goalless draw at home to Lovell’s Atheltic. October was rounded off back in the Southern League, as Exeter’s 2nd XI gained revenge on the earlier mauling, by securing a 1-0 home win.

With fixtures now regularly switching between the two leagues, a 3-1 home win over Swindon Reserves in the Western League preceded a 4-2 away defeat at Bristol City’s second string in the Southern League, representing their third defeat in four games in that division. However, with their bright start to the season in danger of going to waste, that warning was heeded as the side dealt out a 5-2 Plainmoor thrashing to Ebbw Vale a week later.

Comprehensive wins over Bath City (6-2 away) and Exeter (4-2 at home) rounded off an excellent month in the Western League, before the end of November saw the FA Cup take precedence. Drawn against Football League opposition in the shape of Bristol Rovers’ first team, Mackrill’s men more than rose to the occasion, and could count themselves unlucky to only emerge from Plainmoor with a 1-1 draw. United performed just as well four days later in the replay, however Rovers did enough on this occasion to scrape through into Round 2, courtesy of a narrow 1-0 win at Eastville.

This early exit was perhaps a blessing in disguise, as Torquay could now focus on the more important task of mounting a title challenge, with this becoming a real possibility on dual fronts. December, though, was a rather stop-start affair.

A 2-2 draw away to Yeovil & Petters United three days after their cup exit was by no means a disaster, and when this was followed up by a 2-0 win over Bristol City’s second-string the next weekend, United seemed in fine fettle. However a dropped point away to Plymouth preceded a shock 2-1 defeat to struggling Bath City on Boxing Day, in what was the club’s first home reverse of the campaign.

February began well, with home wins in each division, against Barry (3-1, Southern League) and Bath (3-0, Western League). A Western League defeat at the hands of Bristol Rovers Reserves (3-1 away), followed by a Devon Cup exit to Plymouth four days later (5-1 at home) may have been disappointing, however the side were about the embark on a remarkable run of form that would last until the end of the season.

Successive Southern League wins over Yeovil (5-1 at home) and Mid Rhondda (3-0 away) saw United edge into March in good form, whilst in the Western League, a 3-1 success over Weymouth at Plainmoor followed suit. A 2-0 win in Dorset against the same side saw Mackrill’s team further strengthen their Southern League form, before the side again alternated between the divisions with ease, with wins over Yeovil (3-2, away), Newport County Res. (2-1, home) and Taunton (1-0, away) all resulting in maxiumum points.

April brought three more wins in the Southern League, with Welsh sides Mid Rhondda (3-0 at home), Ebbw Vale (2-1 away) and Barry (4-2 away) all suffering defeats at the hands of United to make in a magnificent nine-in-a-row. A Western League double-header against Poole saw the two teams exchange results (1-2 away, 4-2 home), before a trip to Bath finally brought The Magpies’ rampaging run to an end, with the Southern League match ending in a goalless draw. A damaging 2-0 home defeat in the Western League would ultimately cost Mackrill’s side that league’s title, however they recovered enough to register a 1-0 home win over Taunton, before seeing out their Southern League campaign with a 3-1 win over Newport’s reserves.

That victory was enough to see United win the Southern League at the expense of Bristol City Reserves – albeit by the thinnest of margins – with goal average then the deciding factor. The Western League still had a little longer to run, however victories at Bristol City (2-0) and Yeovil (1-0, home) weren’t enough, as City turned the tables on Torquay, this time condemning them to the runners-up spot.

After such a successful campaign, it was absolutely no surprise that the club decided to make a second application to join the Football League. Their initial request some four years earlier was met with almost disdain, however after a number of impressive league and cup showings, United hoped that this time it would be looked upon far more favourably.

The task ahead of ahead of Torquay Chairman Charles Hore though, remained a tough one, as no Football League club had previously failed to win a re-election vote. Up against United in the ballot were Watford, Aberdare, Kettering, Yeovil & Petters United and Ebbw Vale.

Watford were re-elected with ease, whilst none of Kettering, Yeovil and Ebbw Vale received enough support to sustain their application bids any further. Intriguingly, both Aberdare and Torquay were locked together with 21 votes each, forcing a second, decisive ballot.

In another tight vote, Hore’s work at enlisting the support of League clubs paid off, and with the 1926 General Strike still badly affecting Aberdare’s significant mining community, Torquay edged the second ballot with 25 votes to 19, to seal them a place in the Football League.

Whilst everybody at Plainmoor was jubilant, Aberdare were defiant, protesting that a spoilt ballot paper in the initial round of votes should have sealed their safety. Those cries fell on deaf ears however, and so, just over 28 years after a group of school leavers first met to form the initial club, Torquay United would be battling out with the big boys… In the Football League!