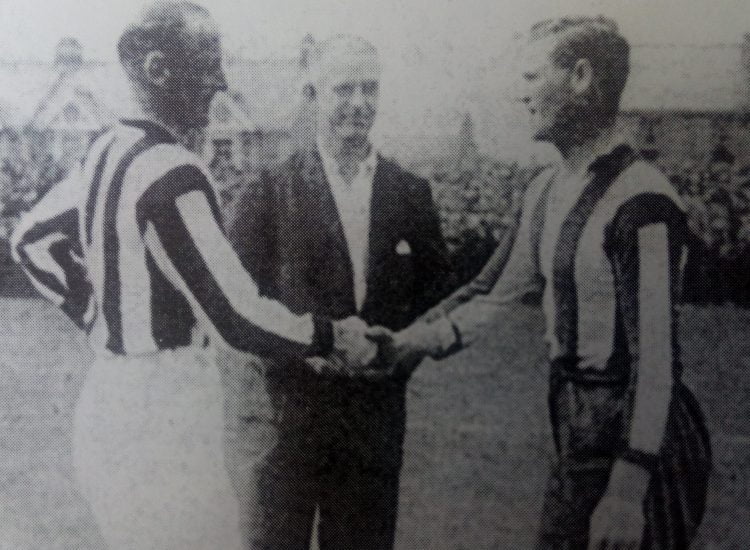 After the excitement of achieving their ambitions of securing Football League status, preparations began around the club ahead of the beginning of the club’s inaugural campaign in Division 3 (South).

Manager Percy Mackrill was particularly busy, as he signed up no less than fourteen new players. Amongst them were the likes of Jim Mackey from Crewe, Tom McGovern from Queen of the South and Jimmy Jones, who made the switch from Aberdare Athletic – the team that United replaced in the Football League.

Due to the election process, United had not been exempted from the multiple qualifying rounds of the FA Cup, and eager for this not to disrupt their league fixtures, the club sought, and gained, approval from the FA to withdraw from the 1927/28 competition.

Finally Torquay could face their Devon rivals Plymouth Argyle and Exeter City as equals, and it was against the latter that United opened a new chapter in their history on 27th August. Over 10,000 supporters flocked to Plainmoor to witness captain Jack Connor (above) and his men play out a closely fought encounter.

The Magpies went close to making a dream debut, as Herbert Turner, another new addition from Coventry, fired his side ahead from the penalty spot. Although a late equaliser for The Grecians spoiled things somewhat, it was a credible showing that should have left the side with plenty of confidence for the months ahead.

Those feelings though, appeared misplaced just two days later, as the team crashed to a catastrophic 9-1 defeat away to Millwall. The team did respond promptly to that sizeable setback with their maiden win at this level – a 3-1 triumph at Merthyr Town – however, four more defeats against Millwall (0-1 at home), Norwich (0-4 away), Northampton (1-5 at home) and Southend (0-1 away) left Mackrill’s side with just three points from seven games at the end of September.

October began more positively, with back-to-back 1-1 draws against Brighton (home) and Bournemouth (away) preceding their first home success, with Turner and Jack Pattison netting against Brentford to secure a 2-1 scoreline. However, a narrow home reverse against Charlton (1-2) seven days later, backed up by another heavy defeat on their travels (1-5 at Bristol Rovers) and a Plainmoor Devon Derby defeat against Plymouth (1-2) would see Torquay on the backfoot once more.

There would be some cause for encouragement ahead of the festive period though, with a spell of one defeat in five matches representing the side’s best form of the campaign so far. Successive victories away to Watford (2-1) and at home to QPR (1-0) was followed by two 1-1 home draws against Newport & Gillingham, either side of their only blip at Walsall (0-4).

Torquay’s defence was undoubtedly proving a real weakness, with the team destined to only keep two clean sheets all season. During the course of nine games after Christmas, United shipped 28 goals and won just once – a 4-2 home victory over Norwich in mid-January thanks largely to a Turner hat-trick. Either side of that, points were added against Merthyr (2-2 home), Northampton (4-4 away), Southend (3-3 home) and Bournemouth (2-2 home), however the matches against Crystal Place (0-2 home), Exeter (0-5 away), Coventry (1-5 away) and Brighton (0-3 away) all ended in defeat.

A 2-1 victory of Brentford at the end of February did see The Magpies notch a league double over their London opponents, however five more winless fixtures against Charlton (0-1 away), Bristol Rovers (0-0 away), Crystal Palace (2-3 away), Plymouth (1-4 away) and Watford (1-1 home) left re-election a probability as the season edged towards the closing stages.

After completing a second capital double against QPR (3-2) at the end of March, Torquay would have to wait another four matches before tasting success again, with losses at Luton (0-5 away & 0-4 at home) coming either side of a 2-3 defeat at home to Coventry, before a 2-2 away to Newport partially stalled that barren run.

United’s penultimate home match heralded their last two-point capture, with Lew Griffiths netting both goals in a 2-1 win over Swindon Town. Gillingham brought Mackrill’s side back down to earth a week later with a another comprehensive defeat though (1-4), before Griffiths repeated his goalscoring feat against Swindon, although this time his brace was only enough to secure a 2-2 draw in Wiltshire.

The failure to win that game, coupled with a 1-1 stalemate at home to Walsall, saw Torquay condemned to finish rock-bottom of the division, however the fact that their destiny remained in the balance going into the last round of matches did at least show United were not far away in matching some of their rivals, with just two points separating the bottom four sides.

It was with disappointment, and no doubt a few nerves, that the club were forced to seek favour with their fellow league clubs once again at the end of the season, as Torquay entered the ballot to remain in the league, rather than seeking to join it. Thankfully, United had earned enough goodwill over the previous nine months to earn themselves a second chance, and it would be another 57 years before the club would be forced to rely upon those votes again.