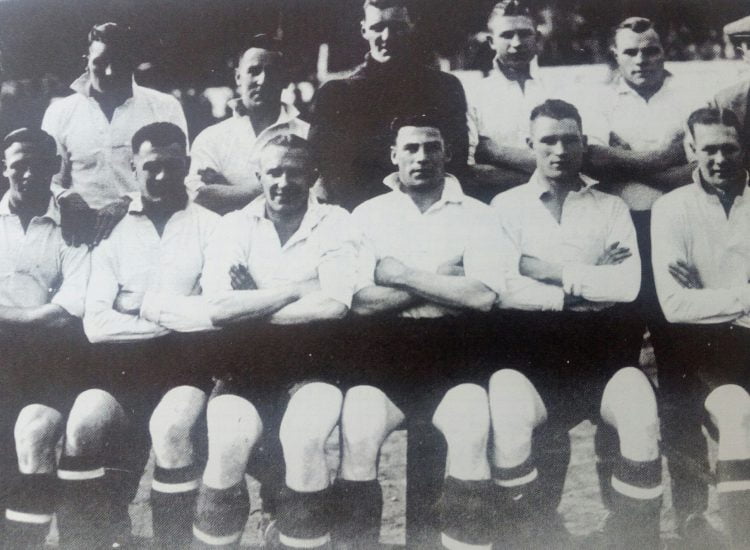 After narrowly avoiding the dreaded re-election ballot following a 20th placed finish in 1933/34, Trainer / Manager Frank Brown was allowed to bring in a number of new faces to help bolster the squad in their bid to challenge towards the top of the Division 3 (S) table.

Never the best travellers, United faced a daunting opening, with both of their two matches in August taking place away from home. Torquay duly lost both games against Gillingham (0-3) and Charlton (2-3), however with four of September’s six fixtures taking place at Plainmoor, a healthy tally of seven points gained from the matches against Swindon (home, 2-1), Charlton (home, 1-2), Aldershot (away, 0-2), Cardiff (home, 5-2), Brighton (away, 0-0) and Luton (home, 6-2) gave them a platform to build on.

October delighted and disappointed in equal measure, with wins away at Southend (3-2) and home to Northampton (2-0) coming either side of defeats against Bristol Rovers (home, 1-2) and Reading (away, 1-3), before defeat at home to Bristol Rovers saw The Magpies make an early exit in the Division Three (South) Cup.

Unable to replicate their recent run to the final despite being granted another first-round bye, United did enough to earn a replay following a 1-1 at Eastville, however following a 0-6 league hammering at Coventry, the match at Plainmoor went the way of Rovers (1-2).

The rest of November was a much more positive affair though, with impressive victories at home to Clapton Orient (4-2) and away to Newport (4-1), preceding FA Cup progress at the expense of non-league Dulwich Hamlet (2-1 away). League matters again intervened in the shape of defeat at Bristol City (0-1), before a shock 3-2 defeat at the hands of Cheshire League side Wigan Athletic saw a second cup exit in front of 20,000 fans at Springfield Park.

With only their league fixtures left to occupy them, minds were focused on attaining a top-half finish, with a 2-1 win at Bournemouth in mid-December doing their cause no harm at all. Although Brown’s side lost at home to Watford in their next match, they made up for that disappointment three days later by recording a second-successive Christmas Day victory in stunning fashion, as Crystal Palace were thumped 7-1 at Plainmoor. Albert Hutchinson particularly enjoyed himself during the festive fun,as he netted a hat-trick. Palace could only manage a 2-2 in the reverse fixture the following day, before The Magpies finished 1934 in style, with a 5-0 home win over Gillingham.

Just a week later though, Torquay were nursing some bruised egos following defeat by the same margin at Swindon, as first match of the new year ended in embarassment. Thankfully, United were in the middle of a particularly hot streak at home though, with Devon rivals Exeter and Aldershot beaten by 3-0 and 2-1 margins respectively. January ended with a much more resilient away performance than it had started, as the side secured a draw in Cardiff (1-1).

The second month of the year saw results alternate between home victories and away defeats, with fixtures at Brighton (home, 3-0), Luton (away, 1-3), Southend (home, 2-0) and Bristol Rovers (away, 0-1) all following that well-established pattern. A 1-1 draw with Reading at the beginning of March ended The Magpies’ impressive run of six successive victories, however there was no change to their away form, as the side returned from Northampton empty-handed following a comprehensive 0-3 loss. More home points in the back-to-back Plainmoor encounters against Millwall (1-1) and Coventry (1-0) kept United ticking along, however another defeat on the road at Clapton Orient (1-3) would stifle the progress.

The remainder of the campaign largely followed that same pattern, with United impressive at home, and decidedly poor away from Plainmoor. Home wins over Newport (2-1) and Bristol City (3-1) sandwiched a 1-1 draw at Exeter, in what was to prove their final away point, as travel sickness once again kicked in at QPR (1-5) and Millwall (2-4). Torquay did avenge that initial hammering in the capital shortly after though, as Brown’s side dispatched Rangers by a 7-0 scoreline.

That was to be as good as it got for United though, with their final home match against Bournemouth ending in a rare defeat (1-2), before a much more predictable result at Watford (0-3) rounded matters off.

Despite their inability to produce consistent performances away from Plainmoor, their home form had once again seen them pull well clear of trouble, as the side matched their previous best finish of 10th, with their 42 fixtures matched by 42 points.

Not for the first time, the club had to wave goodbye to a number of their best players during the course of the season, including popular centre-half Don Welsh, who joined Charlton for a record fee of £3,250. Although those departures sparked some cries of discontent amongst United’s loyal supporters, finances remained scarce at Plainmoor, forcing Brown to shuffle his pack once more.