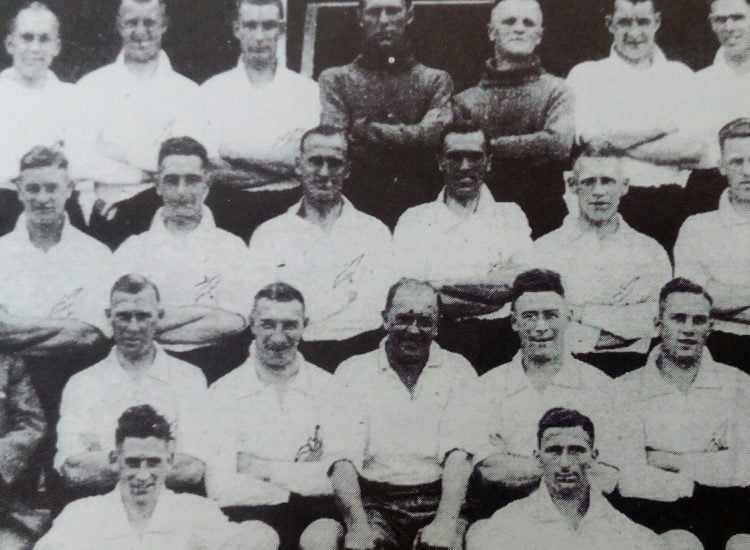 After registering their joint-best finish of 10th in 1934/35, the challenge facing Frank Brown and his team was to build on this, rather than continue alternating between top half finishes and narrowly avoiding the dreaded re-election ballot. Finances though, remained incredibly tight at Plainmoor, meaning that Brown was restricted to making only minimal squad strengthening ahead of the new campaign.

Once again, United were slow out of the traps, as they lost both of their opening two matches against Brighton (2-3) and Swindon (1-4). Those defeats were probably to be expected though, as for the second successive season, Torquay began the campaign with back-to-back away trips – not the ideal scenario for a team that continued to struggle to secure results on their travels.

However, that start was more than made up for by a kind fixture list that saw The Magpies play seven of their next nine games at home, with the matches against QPR (home, 4-2), Swindon (home, 2-1), Watford (away, 2-2). Coventry (home, 3-3), Bristol City (home, 2-0), Exeter (home, 2-1) and Millwall (away, 1-1) in September, followed by those in early October against Southend (home, 1-1) and Aldershot (3-1) seeing United remain unbeaten, adding to Plainmoor’s growing reputation as something of a fortress.

The only setback during this period was a comprehensive exit at Northampton Town in the Division Three (South) Cup at the beginning of the month, as the team made their way back to Devon following a 1-4 defeat. Indeed, it was their inability to find any level of consistency on the road that continued to hold the side back from mounting a sustained challenge at the top of table, with Brown’s side continuing to trade away defeats with home wins, perfectly illustrated over the next month with results against Northampton (away, 1-2), Crystal Palace (home, 3-2), Reading (away, 0-2), Clapton Orient (home, 1-0) and Gillingham (away, 0-1).

With their poor away form putting extra pressure on United’s home encounters, the pressure finally told in the next two league matches, as they suffered back-to-back Plainmoor defeats against Bournemouth (0-2) and Notts County (0-1). In between those games, Torquay did finally break their away duck, albeit against non-league opponents Dulwich Hamlet in the FA Cup (3-2), however they were unable to repeat the trick against Football League opposition in the 2nd round, with Notts County coming out on top once more (away, 0-3).

When Brown’s men eventually claimed success away from home, they did it in style, beating struggling Newport County 6-1 on their own patch on Christmas Day. It was certainly a festive period to remember for United forward Ted Lowery, who returned home with the match ball, following his hat-track in Wales. Although County put up a much better fight in the second encounter 24 hours later, Torquay returned to winning ways at Plainmoor, courtesy of a 3-2 win. With their final match of 1935 resulting in another two-point haul at home (v Brighton, 1-0), the club’s supporters were hoping that a more consistent run of results in the new year could spark a late challenge towards the division’s top spots.

Unfortunately, United reverted to type in January, with away losses at QPR (1-2) and Bristol City (0-2) coming either side of home wins against Cardiff and Watford (both 2-1). Any hopes of contesting a place in the higher echelons evaporated during a winless February, with defeats against Milwall (home, 1-3), Southend (away, 1-2) and Aldershot (away, 0-1), followed by draws against Northampton (home, 3-3) and Clapton Orient (away, 1-1).

It took a double dose of good fortune to end that run at the beginning of March, as two own goals gave The Magpies a 2-0 home victory over Bristol Rovers. Although a 0-1 defeat at Crystal Palace seven days later was disappointing, luck was again on their side at Plainmoor the following weekend, as another own goal set the side on their way to a 4-2 triumph over Gillingham, as United’s players rediscovered their own finishing in front of goal. Sadly, that form wouldn’t replicate itself away from home though, as Torquay went down to a 0-1 defeat at Luton Town four days later, before the month was rounded off by a 1-1 draw at Bournemouth.

With only two of their final seven matches in at home, it was no surprise that United stuttered towards the season’s finishing line, despite beginning April with a superb 2-1 win over Luton, having lost to the title-chasing side less than a fortnight earlier. The next three away games yielded just one point though, with a draw at Exeter (1-1) sandwiched between losses at Notts County (0-1) and Bristol Rovers (0-3). Torquay’s final home match of the season, against another side with title ambitions, Reading, resulted in their solitary goalless draw of the campaign, before Brown’s team claimed only their second away win in their penultimate match, as The Magpies again left Wales victorious, following a 2-1 success at Cardiff.

The ‘Jekyll and Hyde’ nature of United’s home and away form would ultimately consign them to another mid-table finish, however their displays against the division’s top sides proved that on their day, they had absolutely nothing to fear. One example of this came on the final day of the season, as Torquay fought out a dramatic encounter at league leaders Coventry. With the hosts desperate for victory to secure promotion to the second tier, United rose to the occasion, and in front of over 30,000 fans, took the lead with just fifteen minutes left. Looking to record one of the shock results of the season, it would take two late goals to turn the game around and deny Brown’s side (1-2), however it was only fitting that their efforts were rewarded with another 10th place finish, with 41 points gathered from their 42 matches.