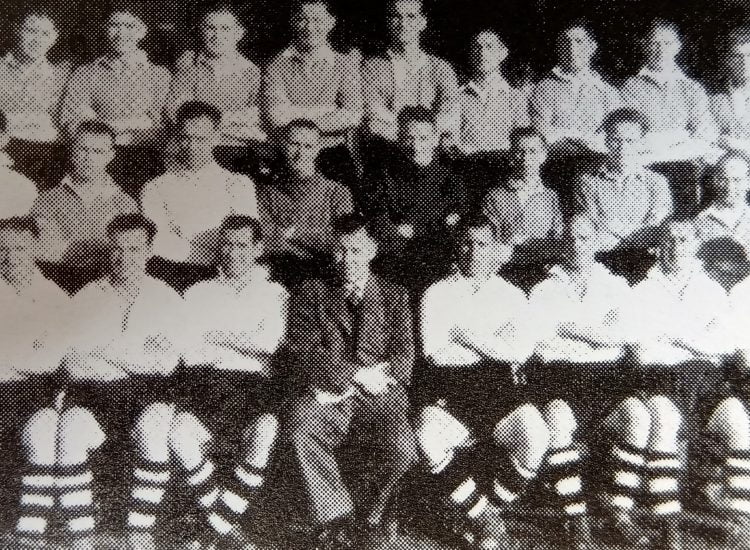 A promising start under boss John McNeil during 1947/48 had ultimately ended in disappointment, as a dramatic loss of form in the second half of the season left the club to flirt dangerously with the Division 3 (South) re-election places. Their early upward momentum though, did at least provide some hope for better times to come in the months that lay ahead.

10,627 supporters turned up to Plainmoor on the opening day of the season, with the majority heading home happy, following United’s 3-1 victory over Notts County. Those satisfied smiles were nowhere to be seen four days later however, as Torquay were humbled 1-5 away at Ipswich Town . McNeil’s side worked hard to eradicate that memory though, with 1-1 draws away at Walsall, and at home to Town in the return fixture, following soon after.

Joe Rae was the hero of the hour in their next game, as it was his brace that secured a 2-1 triumph in the opening Devon Derby of the season at home to Exeter City on September 4th, before another 1-1 draw, away at Watford, preceded The Magpies’ first home reverse of the season – 0-2 against Bristol Rovers.

Results came in pairs for the team during the next six weeks, with back-to-back wins over Watford (3-1, home) and Newport (2-1, away), followed up by successive 0-4 defeats against Swansea (home) and Reading (away). Following the same pattern, United bounced back to register successes over Bristol City (2-0, away) and Swindon (3-1, home), before setbacks duly followed again at the hands of Brighton (1-3, away) and Southend (0-3, home).

During this spell, a new face had emerged to spearhead Torquay’s front line, and would continue to do so with distinction for the next ten years. With a number of impressive performances for the reserves already under his belt, Ronald Dudley ‘Sammy’ Collins wasted little time in announcing his arrival from Bristol City, as he netted the first goal for his new club against that very club! By the time his two goals clinched a 3-1 away day win at Millwall in early November, Collins had already bagged six goals in his first games, and United’s supporters knew they had a new favourite to pin their hopes on.

Even Sammy’s goals were unable to steer the side back on course during a particularly barren run that would last until the end of the calendar year, with the matches against Aldershot (2-2, home), Leyton Orient (1-3, away), Northampton (0-0, away), Notts County & Bournemouth (both 0-5, away) failing to herald a win, before the latter side’s return visit at Plainmoor saw 1948 brought to a close in the shape of a 1-1 stalemate.

On a more positive note was the news that FA Cup progression into the New Year had been secured, courtesy of a 1-0 away win at Peterborough in Round 1, and a fine 3-1 home victory over Norwich in Round 2. After putting to bed their poor league run in excellent fashion – a 5-1 home thrashing of Walsall – McNeil’s men were in much more confident mood ahead of their 3rd Round clash against Division 2 side Coventry City at Plainmoor. Matching their higher division opponents for the entire game, it was a late goal from Hugh Cameron that gave them advantage they deserved for their efforts, before United playing out the dying stages to record a shock 1-0 win.

The excitement at beating a team from the league above – in addition to making the 4th Round for the first time – did initially see their league form suffer, in the form of away defeats at Exeter (0-2) and Bristol Rovers (0-1), prior to the highly anticipated clash with Brentford on January 29th. With a number of United fans travelling to London to support The Magpies for this historic occasion, Torquay put on a excellent display in the fog against another another Division 2 side, before eventually bowing out following a single-goal defeat in the capital.

With only the league left to concentrate on, United alternated between wins and defeats during an inconsistent spell, as a win against Norwich (2-1, home) was followed by defeat at Swansea (1-6, away), with the fixtures against Reading (4-2, home) and Bristol City (0-2, home) following the same pattern. A 1-1 draw at Swindon preceded an identical outcome at home to Brighton, a match in which the Torquay faithful would get their first glimpse of another future Plainmoor legend in action.

Although there was some measure of disappointment when United favourite Charlie Hill left the club for Queens Park Rangers, his departure paved the way for the arrival, initially on loan, of a player that would establish himself as one of the very best to have ever represented the club – Don Mills.

It was therefore no surprise that Mills’ vision, control and distribution sparked an instant upturn in performances, not to mention results, as the side embarked on an end-of-season run of 13 games that yielded 7 wins and just 1 defeat. Forward Jack Conley was one of a number of men to flourish, netting a hat-trick in the 4-0 home win over Newport, before draws with Southend (1-1, away) and Port Vale (0-0, home) paved the way for five successive wins against Milwall (2-1, home), Aldershot (3-1, away), Leyton Orient (7-1, home) and Crystal Palace (1-0 away and 2-0 at home).

Although that excellent spell ended with a 1-3 defeat at Port Vale, two positive results against Northampton (3-0, home) and Norwich (0-0, away) was enough for McNeil’s ever-improving side to clinch 9th position – the highest placing in the club’s 50-year history.