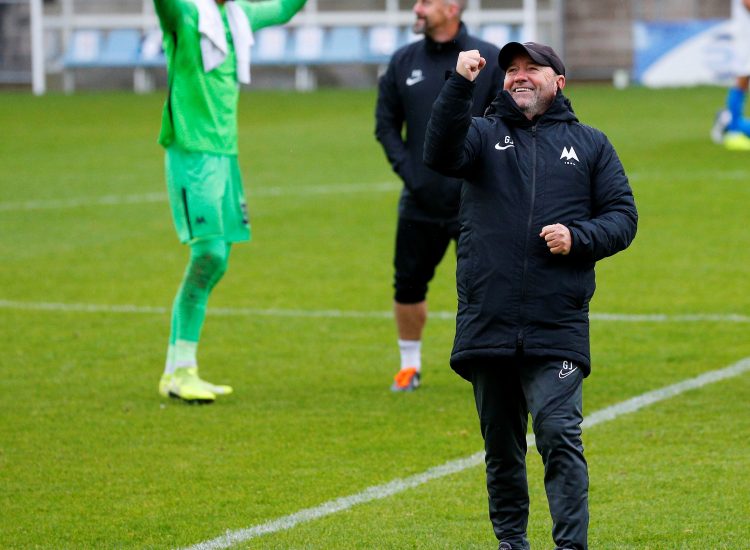 Following the 1-0 win over Stockport this afternoon, Torquay United manager Gary Johnson gave his thoughts on what was a hard-earned three points for his side.

“We know they are a big, strong team. Obviously it was very windy, and the wind seemed to change direction for them in the second half, as it was with them in the first. They have a game plan that does get the ball forward quickly, and we have to defend it.

“I thought we defended our penalty area fantastic. Our back five, the midfield, and the goalkeeper defended like trojans, and I am proud of them for that. Unfortunately, we didn’t attack like trojans until the end.”

Despite Stockport enjoying spells of possession, it was United who ultimately emerged victorious, thanks to a strong finale by the men in Yellow.

“It wasn’t just the goal – we hit the crossbar, Louis [Britton] had a couple of good shots, had a good header and then we got the goal. It was a great time to get it, and we’re delighted because that’s not our best game, by any stretch of the imagination, but sometimes you have to give credit to the opposition.

“It was a rough and tumble game, and we had to stay in it. We had to make sure we competed as much as they did, and we did do that. We lacked a little bit of quality – we have got the quality – but we lacked it on the day. Maybe that is credit to them, but we will get better, and it’s nice to know that you haven’t had your best game, and won the game.

That strong finish by Johnson’s men was particularly pleasing for the gaffer, who has long been stressing the importance of keeping the players’ fitness levels up, during what has been a very difficult seven months without a competitive fixture.

“When we defended, we looked fit, in as much as we could throw ourselves in front of things. We needed more quality when we broke forward, we gave the ball away too much, but in the end, they got tired and we picked up.

“It meant suddenly that Asa [Hall] found a couple of balls for us, Adam Randell found a ball or two for us, and then Louis got himself in, being fresh, with a couple of great strikes. That gave us the momentum to get the goal. I’m pleased because that means all our preparations and all our thoughts were focused on this game.

“Now we have to focus quickly on Eastleigh. They have had a really good result, they’re obviously going well, so we’ve got to just try and pick up another three points, and play a little bit better than we did today. Credit to all the boys, we hung in there, and nicked it in the end.”

With three new faces thrust straight into the matchday squad, United’s manager was pleased with the contributions made by all of them, with Sam Sherring showing up well in the starting XI, before Britton and Randell’s late introductions helped to seal a late, late win.

“They are three good players, they are very good additions to our squad.

“You’ve got to pick the right time to bring these players on. As a manager, you put people on, you do it for the right reasons, and you hope it doesn’t backfire on you. Some do, and this one didn’t, and it sort of won us the game really, because we had three, big, refreshed legs that showed us a little bit of quality.”

At the end of the match, Johnson paid his own personal tribute to the Yellow Army watching at home, with his familiar celebratory fist pump in front of the Popside altered slightly for the livestreaming cameras.

“It was strange to do the old fist pump with no noise, so I made the lads give it the ‘whoa…’, so at least it made it feel real. Credit it to them because they’re always up for what the manager asks them to do.

“Well done to the club for staging the game. A lot has gone into this, and I’m proud of our football club.”