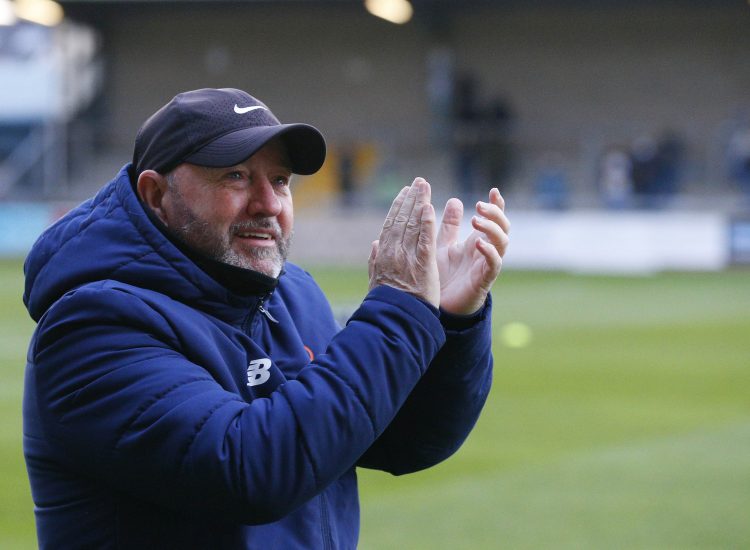 United manager hailed the club’s professionalism on and off the pitch, as his side gave the Yellow Army the perfect welcome back to Plainmoor, with a 3-1 victory over Wrexham.

“It was nice, especially the first 20 minutes or so,” said Johnson.

“The supporters were trying to sing, but trying to do it lower than usual! They were brilliant today I thought, and the club looked very professional in these times, at the moment. The supporters stayed in their places, and everyone knows we’ve got to get through this period – on the pitch and off the pitch – so it was a great little test for our supporters, and for our players, because Wrexham are no mugs.

“They’ve had quite a few good results lately, but our first 20 minutes were brilliant, when we’ve obviously gone 2-0 up. It was a little airy-scary when it went 2-1, but to get the third one on the final stages of the game was lovely.

“I think they had one chance – I can’t remember too many opportunities that they had. They had a little bit of play, but the boys put in the energy that they needed to put on to stay top of the league, and then that little bit of quality every now and again that you need to score three goals.”

Goals from Ben Whitfield and Asa Hall saw his side race into an early 2-0 lead, and with their loyal supporters willing them on at close-quarters, the result everyone at the club wanted was eventually acheived.

“We, on the line, wanted to keep it going, and so did the players, but we’ve got an opposition that are trying to stop you doing that. It was a nice welcome back, a lovely welcome back, both our supporters to us, and I felt us to our supporters. There was an appreciation society there, between the two sets on and off the field.

“The supporters have gone home and got what they want. They’ve done great, because it was a very cold evening, and they supported us when they needed to, and we thank them for that. Their team is still picking up results, and we need to keep that going.”

It was left to Connor Lemonheigh-Evans to seal the points with just over quarter of an hour left, meaning that United could see out the closing stages in relative comfort.

“At this level there is always someone in the opposition – including us – scoring late on, that can pull something of the bag. We’ve done that as well ourselves on two or three occasions, so it does get a little bit nervy and you do need to be those two goals up when there’s five minutes to go, rather than it be 2-1 and then throw caution to the the wind.

“I think there was still 15 minutes to go, so we had to shuffle our pack a bit. Connor took a couple of very heavy challenges, and so we took him off as a precaution, and Fraser had done well because he hasn’t played any games for a long, long time, but we kept him out there longer than we expected, so credit to him. He played his part.

“The only time they really got in there was when it was free kicks or corners that we had to deal with, because they had some big lads. We didn’t deal with one of them, because that was their goal, but we’ve got to be really pleased beating Wrexham 3-1.”

After over nine months away, United’s supporters only have to wait another few days until their next visit, with Maidenhead making the trip to Plainmoor on Tuesday evening. After retaining their spot at the summit of the National League, Johnson is now eager for things to continue moving forward – on and off the pitch.

“It was the first time our supporters have been in the stadium, and like I said, the professionalism of the club’s organisation – Hopefully the fans appreciate that, because the club is trying to keep them safe.

“Hopefully as we build up, hopefully we can start to get a few more in, and we can get ourselves further away from the chasing pack in the league.”