TORQUAY United manager Gary Johnson takes the Gulls to Wrexham after a fortnight’s ‘mini-break’ against a background of uncertainty over the Vanarama National League relegation battle, this week’s in-and-out of striker Ade Azeez and defender Gary Warren – oh, and the threat of that ‘Dennis The Menace’ storm of course.

United (15th) head for North Wales nine points off the Play-Offs, but only five clear of the drop-zone and three ahead of Wrexham (19th).

“This is a proverbial six-pointer,” volunteered Johnson, stressing: “Our next win is going to be vital, and the earlier it comes the better.

But Saturday’s match (3pm) – the Racecourse Ground is expected to be battered by ‘Storm Dennis’ over the next 36 hours – comes as everyone is wondering whether plans to re-introduce expelled League One club Bury into the National League structure next season will affect how many teams are relegated this time.

Four teams normally go down to either the NL North or South, but Johnson said: “Teams have got to know what’s happening.

“They can’t leave it until the last minute.” 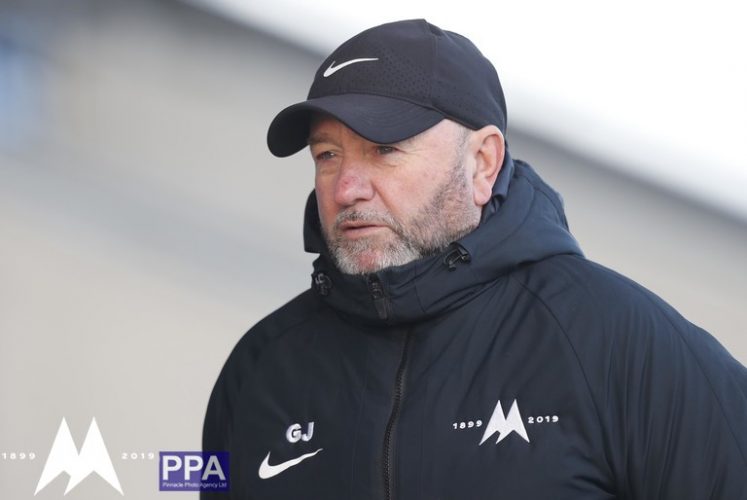 The United squad which set off on Friday included Azeez after his loan transfer from Newport County to the end of the season.

The 26-year-old former Charlton Athletic, AFC Wimbledon, Partick Thistle and Cambridge United forward is chomping at the bit to get stuck in to his second loan spell at Plainmoor, especially as it comes seven months after he ruptured an Achilles tendon last summer.

“I am really excited at the prospect of linking up with Reidy (leading scorer Jamie Reid) and creating a good partnership,” said Azeez.

“Coming here from Under-21 football (in 2013) to a men’s relegation battle, it helped me to grow up as a man and a footballer quite quickly.

“I enjoyed it here then, so when I got a call from Downsey (assistant Aaron Downes) and the gaffer, it was a no-brainer.”

Johnson added: “It’s a good signing for us – we needed that bit of extra pace up front, a different kind of player from Jared (Lewington) and Reidy.”

Johnson admitted his disappointment at losing centre-back Warren back to Exeter City after four impressive games on loan, but the Gulls will monitor Warren’s situation at St James Park – his contract there is up in the summer. There is still an injury doubt about young defender Robbie Cundy, who also missed the 2-1 defeat at leaders Barrow a fortnight ago, and United have been looking at a trialist central defender in training this week.

“We have got one one or two players in mind to cover that spot, and we have to make sure that we have enough numbers by the March (transfer) deadline,” said Johnson.

Also still out are full-backs Ben Wynter and Liam Davis – Wynter is close to a return from his groin injury – and midfielder Matt Buse, whose ankle problem has flared up again after a 45-minute run-out in a cup game at Tavistock Town recently.

Two wins in their first 12 games put Wrexham on the back foot at the start of the season, and they have never really managed to generate any momentum since.

The return of Dean Keates in October was their seventh managerial change since he left for Walsall 19 months before, and he has had to make a raft of loan signings to cover for a run of injuries, especially in defence, and the recent departure of eight-goal leading scorer Bobby Grant to Accrington Stanley.

But their form has picked up a bit of late, despite a last-gasp 3-2 defeat at fellow strugglers Chesterfield last Saturday, and only four defeats at the Racecourse show that they can be tough to crack at home. They also have the influential figure of former United stalwart Luke Young in midfield – the ex-Plymouth Argyle man is now tipped to repeat his two Player Of The Year awards at Plainmoor.