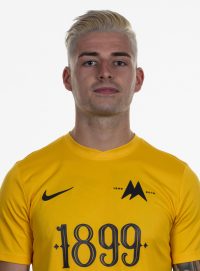 The ambitious young forward went on to make a significant contribution to our bid to escape relegation in 2016/17, with the winning goal against Southport will living long in the memory of the Yellow Army. However, last season saw the Irishman utilised on the right side of midfield by manager Gary Johnson, with Keating responding by producing a number of eye-catching performances.

With a knack of scoring important goals, added to his natural strength and pace, Ruari will be eager to enhance his reputation further following his best season yet with the club.