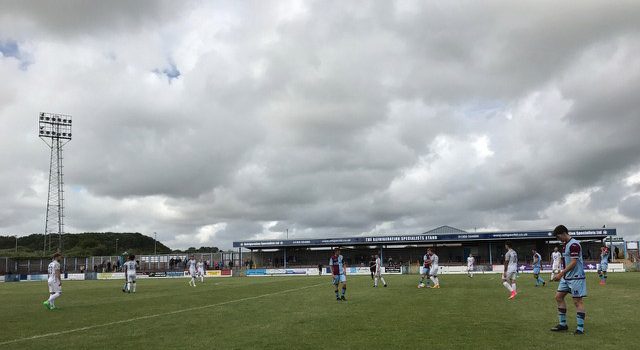 Today’s 1-0 win over Weymouth was another step forward for the squad according to Torquay United player-manager, Kevin Nicholson.

Weymouth have already beaten Exeter City during their pre-season campaign, so a trip to the Bob Lucas Stadium wasn’t to be taken lightly by United.

“Today was a really good workout and another positive step in the right direction,” said Nicholson.

“It was the first time we have come up against a 3-5-2 formation and it caused us a few issues for 30 minutes or so.

“Although Weymouth didn’t really trouble our goalkeeper, they played some excellent football and played through us too easily at times. Once the lads took a step forward and closed down their space we kept picking them off and were the aggressors which was great to see.”

United came into their own more in the 2nd half, and were able to take the lead after trialist Rory Fallon and Jon-Paul Pittman combined.

“We started the 2nd half brightly and a very route one goal was well finished by JP after a great flick from Rory Fallon.”

The Gaffer had made it known before the match that he wanted to see more goals from his side. Although they only managed one, the hunger is there to score more.

“The lads are a little disappointed in there as they wanted more goals, but I like that hunger and the way they applied themselves all week has been a credit to them.

“This group want to work and want to learn, and that has shone through since day one of pre season.

“Another week ahead now to try and polish a few bits up but we are in a good place and will work very hard to improve a little each day.”