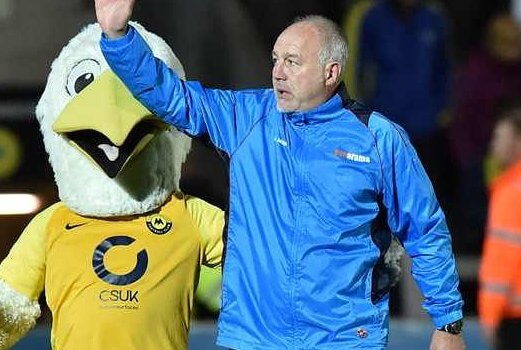 Torquay United head coach Gary Owers was delighted with the ‘best birthday present ever’ as United collected their first three points of the season on Tuesday night.

United recorded their first victory of the season in style, by putting four past Maidenhead United, who arrived at Plainmoor late, delaying the kick-off by 30 minutes.

Josh McQuoid and Rhys Murphy scored their first goals for the club, while Luke Young and Jamie Reid also got their names on the score sheet.

“I’m grateful for that. I did try and keep it a little bit quiet but I was hoping that the lads could deliver the best birthday present ever and they did,” Owers explained. “Listen, it’s a great victory. It’s a great night. It’s only a small step, we’re not getting carried away. That’s our first win. That’s a starting point for us. We’ve got a tough game on Saturday but if we can find that rhythm and tempo again we’ll give anyone a game.”

With Maidenhead experiencing delays on their way to the ground, Owers was delighted with the professionalism of the United squad to deal the with the problem at hand.

“We were waiting for them. We were ready for them. We knew what was happening, we were organised and we wanted to turn their situation into our advantage and I thought we did that.”

United’s performances have improved in recent weeks but they have been unable to find that illusive first win, Owers is hoping the squad can build on Tuesday night’s victory.

“Most of all, I’m pleased for the supporters. It was great to hear them singing at the end and cheering the lads off. They would have enjoyed that, that was for them.”

United are back at Plainmoor on Saturday as they prepare for another tough test in the form of Dover. Owers is looking forward to the challenge ahead.

“I don’t think we should fear anyone in this league. If we can get to that level, we’ll give anyone a game, I’ve said that to the players. We’ve played Macclesfield, who are fourth. Dagenham, who are second and there hasn’t been anything in the games. Anyone can beat anyone on the day.”