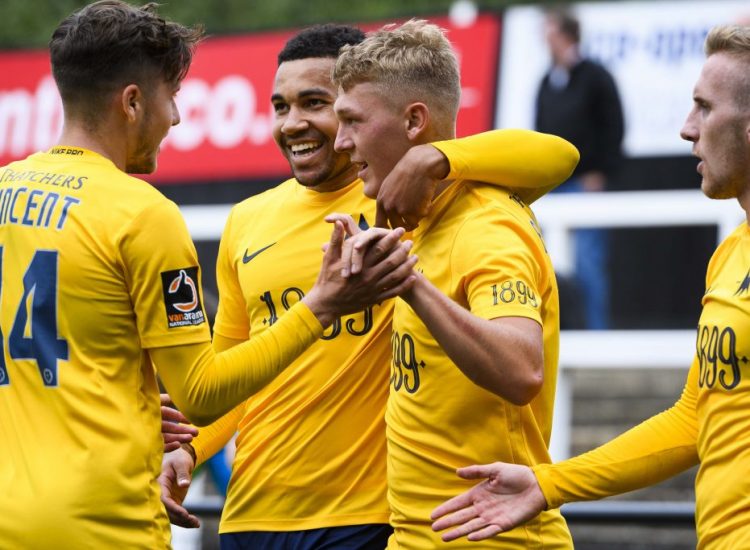 United showed admirable spirit to earn their first away point of the season against Bromley, at a blustery Hayes Lane on Saturday.

After skipper Joe Holland bundled the hosts in front early on, Torquay rallied and deservedly equalised through a Jamie Reid penalty. Parity would only last ten minutes though, as Joe Kizzi restored the lead for the home side on the stroke of half-time. The second half saw United rise to the occasion and turn the game on it’s head, with Connor Lemonheigh-Evans and Jake Andrews both scoring midway through the second period. The lead was to prove short-lived however, as Frankie Raymond levelled the scores for the final time.

Following last Tuesday’s 3-0 reverse at Solihull Moors, manager Gary Johnson made three changes for the trip to Greater London. Frank Vincent, Jake Andrews and Kalvin Lumbombo-Kalala returned to the side, at the expense of Joe Lewis, Opi Edwards and Ruairi Keating.

United made the worst possible start, with Holland firing the hosts inside inside two minutes. Raymond’s free-kick was played into the box, and with the Torquay backline hesitating, Bromley’s captain reacted quickest to fire home from six yards.

Despite the poor start, The Gulls steadied the ship pretty quickly, and amid ferocious conditions began to put a few good passing moves together.

Although failing to really work Mark Cousins in the Bromley goal, a corner count of 5-1 in United’s favour on the half-hour mark did at least give some indication of United’s dominance in possession.

The game burst into life on 34 minutes – First, Armani Little finally forced Cousins into action, as his smothered parry denied the United midfielder.

Then, a minute later, Lemonheigh-Evans went done under an aerial challenge from Luke Coulson, with the referee signalling a spot-kick.

Back on penalty duties, Reid stepped up and fired the ball to Coulson’s right to make it 1-1. 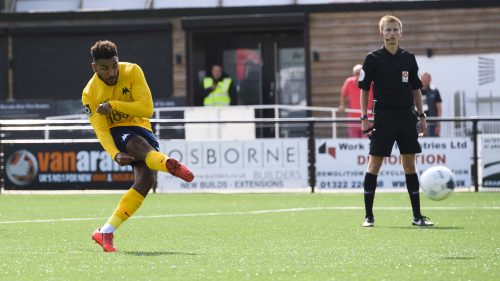 Five minutes later and Johnson’s men were given an unusual opportunity to take the lead, as the referee awarded a back-pass in the Bromley area. In truth though, with the entire home side blocking Andrews’ route to goal, it was no surprise when the ball was blocked and cleared away.

The ball became rather scrappy in the ensuing minutes leading up to the interval, but having worked so hard in difficult conditions to draw themselves level, it was with real disappointment that United conceded in the final minute of the half.

After floating a free-kick into the area, MacDonald actually did well enough to tip Michael Cheek’s header onto the crossbar, however, the ball fell straight into the path of Kizzi, would duly slammed the ball into the net to put The Ravens 2-1 up at the break.

It was important the United began the second half well, but it was Bromley who were initially forcing the issue as the game resumed.

Coulson, looking to atone for the penalty, was well-placed to extend the home advantage in the 47th minute, but mercifully, he missed the target from inside the box.

The wind appeared to be even more fierce in the second half, but to their credit, The Gulls failed to be blown away and slowly began to play their way back into the game.

After both sides traded ambitious long-range efforts, United drew level for the second time on 63 minutes. 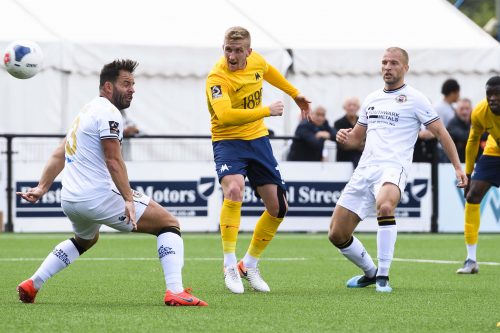 A fine passing move eventually saw the ball worked it’s way to the back post, where Lemonheigh-Evans was on hand to flick the ball into the net.

Six minutes later, and Torquay were ahead for the first time in the game.

Kalvin Lumbombo-Kalala, who could have been awarded a penalty moments earlier, drove towards the area and produced a fine cross to find Andrews, who accepted the invitation with a confident finish to make it 3-2. 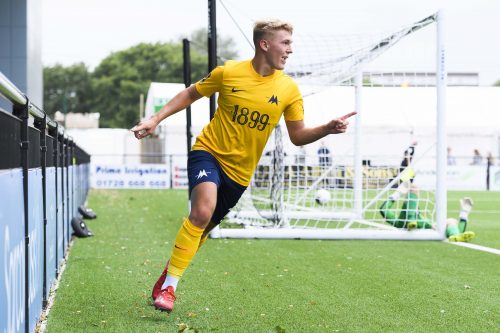 Frustratingly the lead lasted just two minutes. After visibly lifting their game, Bromley won a corner, and with Raymond exploiting the strong wind, the flag-kick drifted straight over MacDonald and into the back of the net.

Both sides continued to trade punches in search for a winner, with Coulson guilty again of a bad miss on 77 minutes.

United’s passing game continued to hold up remarkably well in the difficult conditions, but they despite some promising positions, they were unable to fashion another chance before the referee brought an end to an enthralling match.

After taking their first valuable point on the road, The Gulls will be hoping the Yellow Army turn out in force on Tuesday evening, as they take on Maidenhead at Plainmoor.