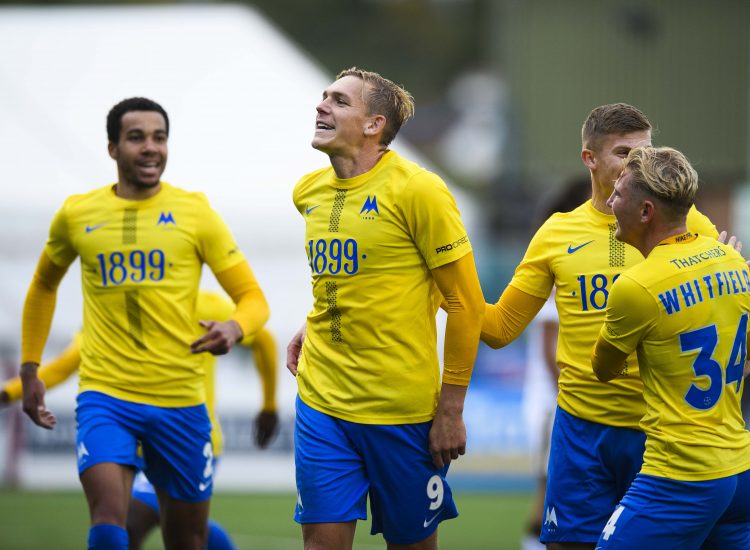 United produced a superb fightback at Hayes Lane to register their first win on the road with a 2-1 win over Bromley at Hayes Lane on Saturday.

Byron Webster opened the scoring for The Ravens, before a show-stopping strike from Adam Randell levelled things up. With the clock ticking down, it was then left to the cool head of Danny Wright to seal a deserved victory with an injury-time penalty.

United boss Gary Johnson made two changes to the starting line-up that went down 2-1 to Eastleigh on Tuesday, with loan signings Randell and Louis Britton taking the places of Asa Hall and Josh Umerah. On the bench, defenders Louis Slough and Gary Warren took their places amongst the replacements for the first time this season.

Just as they had done in Hampshire, The Gulls showed up well in the early stages and enjoyed the bulk of possession, without troubling home goalkeeper Mark Cousins during the opening ten minutes.

The first shot of any sort came in the 11th minute, as a dangerous left-wing cross from Ben Whitfield threatened to dip just below the bar, with Cousins forced to divert it to safety. 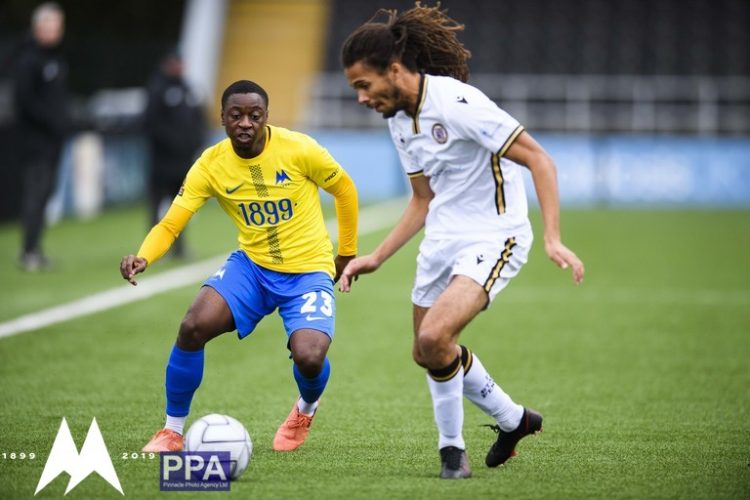 Seven minutes later, the hosts took the lead out of nowhere.

After winning a corner on their right, a degree of hesitancy in United’s backline allowed Webster enough time to tee-up a firm right-footed effort from 15 yards out, with the ball sailing past Lucas Covolan and into the net.

The goal failed to diminish Torquay’s dominance on the ball, however a string of crosses into the box couldn’t find the intended recipient, leaving strike duo Wright and Louis Britton little to feed off.

Despite leading, Bromley were being forced to feed off scraps in the final third, whilst their dogged defending at the other end continued to keep Johnson’s side at bay.

Five minutes before the interval, a fine interchange of passes between Aaron Nemane and Ben Wynter gave Wright the opportunity to direct a header in towards goal, however with the ball sent just behind United’s experienced target man, he couldn’t generate enough power to test the The Ravens’ goalkeeper.

Covolan had to be alert on the stroke of half-time to keep the deficit at just the single goal, as Ben Williamson found room inside the box to force a near-post save.

As the players headed for the dressing room discussions at the break, Torquay’s players were left to contemplate a half that lacked nothing in commitment or endeavour, with only the final ball missing.

As things got back underway, the second period was showing all the hallmarks of the first 45, with the men in yellow once again on top.

Whitfield warmed the gloves of Cousins with a right-footed effort from just outside the box in the 51st minute, before fervent appeals for a United penalty fell on deaf ears after Wright went down under a challenge inside the box.

Johnson’s side were beginning to apply some serious pressure, with Nemane’s low drive forcing Cousins to parry the ball away, with Wright ready to pounce at point-blank range.

Then, just past the hour, Randell produced a moment of magic to draw his side level.

After keeping pace with the rampaging Wynter down the right-hand side, the ball was played centrally to the Plymouth Argyle loanee, who took a touch before unleashing a tremendous right-footed shot that seared into the top-corner, with the Bromley glovesman flat-footed. 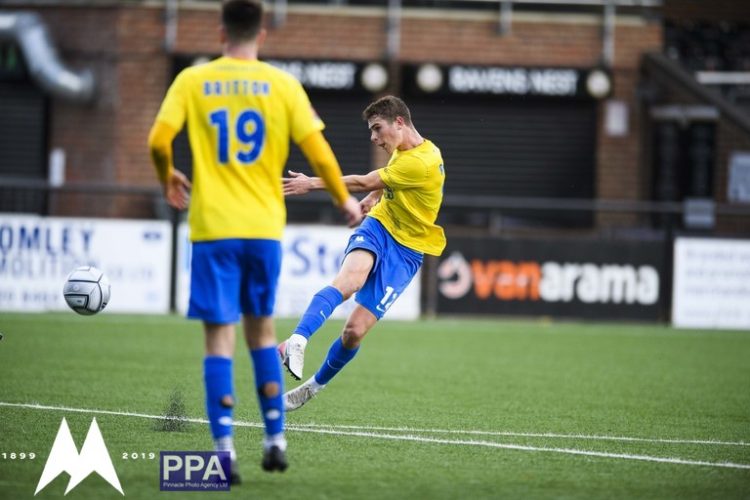 With parity restored, Torquay went in search of another, and moments later they nearly found it.

Whitfield did well to win a corner on the left, and from Connor Lemonheigh’s corner, Randell’s mishit shot fell kindly onto the head of skipper Kyle Cameron, with his firm header destined for the back of the net, with only Cousin’s fingertips keeping the scores level.

At this stage, Bromley’s defence, relatively underworked in the first half, were now having to employ all hands to the pumps to repel their opponents, with wave upon wave of United attacks pinning the home side back against their own goal.

With eleven minutes left, they went close again, as Cameron, enjoying a sizeable amount of joy down the left, sent in an inviting cross into the box that the diminutive Nemane threw himself at – the effort though, went agonisingly wide of the far-post.

As time ticked by, a point was looking scant reward in light of United’s performance, however Covolan had to produce a tidy save in the 87th minute, with Joe Kizzie’s header from a corner threatening to rob the men in yellow of even that.

A marvellous moment of trickery from Whitfield saw him jink past two defenders on his way to firing a low shot into the hands of Cousins, as Torquay continued to pile on the pressure.

Then, three minutes into stoppage time, the break finally came.

After winning a corner, Lemonheigh-Evans’ delivery towards the penalty spot caused just the chaos United craved, and with substitute Warren stretching to poke the ball into the path of a teammate, Kizzie’s challenge was deemed too physical, with the referee pointing to the spot.

Wright was the man given the responsibility to win the match, and he duly delivered by sending Cousins the wrong way.

There was to be no further drama, with The Gulls doing enough to see out the final stages and clinch a fully-merited victory.

With six points from three games, Johnson’s men move up to 7th in the fledgling National League table, ahead of a return to Plainmoor on Tuesday, with Chesterfield the visitors.