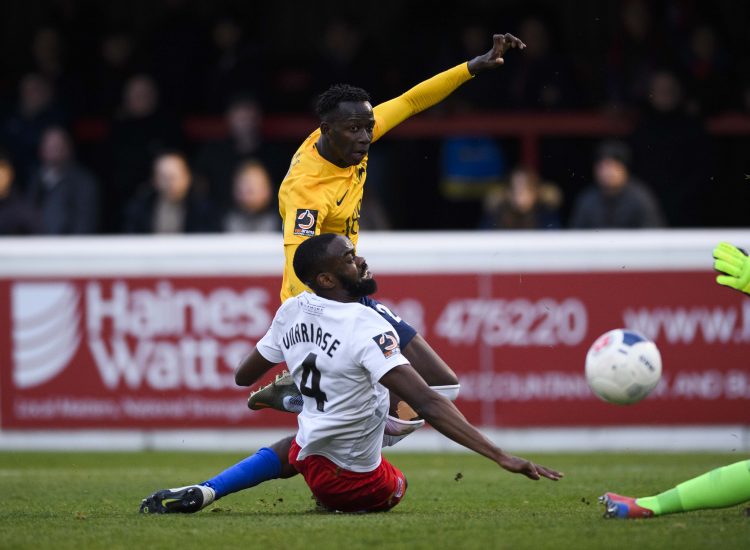 United had to settle for a point at the Chigwell Construction Stadium, with the meeting between the two sides finishing scoreless for the second time this season.

United boss Gary Johnson made two changes to the side that lost on New Years Day, with Jake Andrews lining up at left-back following Jean-Yves Koue Niate’s red card against Yeovil, and Saikou Janneh returning from his own suspension in place of Aaron Nemane to join leading scorer Jamie Reid in attack.

The early territorial advantage was certainly with the home side, with The Daggers making the most of the opportunity to impress new manager-in-waiting Daryl McMahon in the stands.

Connor Lemonheigh-Evans had to be particularly alert in the 11th minute, as he came to the rescue by clearing a Joe Quigley header off the goal line.

The travelling Yellow Army had to wait until the 20th minute for United’s opening sight of goal. When it did arrive, home defender Liam Gordon was on hand to put Reid under sufficient pressure, leaving The Gulls’ striker to fire his effort high and wide of the target, following an excellent run from Ben Whitfield.

In the 38th minute, Torquay went much closer, with only the woodwork saving Dagenham. A long ball forward from Whitfield gave Janneh something to chase, and after getting the ball under control, he looked up and steered his shot past Elliot Justham and onto the post, before the ball rebounded back to the grateful glovesman.

After showing an improvement in their play leading up to the interval, it was pleasing that United took this into their second half performance.

Six minutes after the restart, the goal frame once again denied Janneh from giving his side the lead, with his deflected shot cannoning of the crossbar before Whitfield could follow up.

Around the hour mark, there were chances at both ends, with Janneh’s low ball across the box just evading Reid, before Asa Hall came up with a vital clearance in his own area to prevent The Gulls from falling behind.

Midway through the half, and it was makeshift left-back Andrew’s turn to come up with a timely intervention, with his goal line block denying Alex McQueen.

As the match wore on, it was Torquay who were finishing the stronger, with a number of forays into the Dagenham box just lacking the finishing touch.

Lucas Covolan did produce two smart saves in the 69th and 72nd minutes, from Quigley and Luque respectively, but with 13 minutes left, it was Janneh again who came close to grabbing the three points for Johnson’s men.

A trademark Andrews delivery found the on-loan Bristol City striker peeling off at the back post, however his stretching header didn’t quite have the power to beat Justham, and The Daggers’ keeper duly gathered.

A point on the road is never to be sniffed at, and the travelling Yellow Army would have been pleased with the endeavour shown by their side.

United now face a break in National League action, as Johnson’s men take on FC Halifax Town at Plainmoor in the FA Trophy next Saturday.