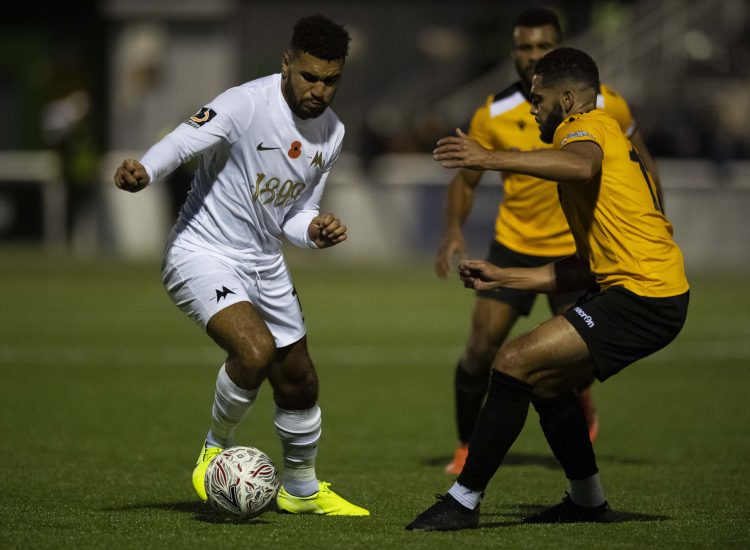 United’s interest in the Emirates FA Cup came to an end on Saturday, as Maidstone came out on top at the Gallagher Stadium.

A fortuitous opening strike from Danny Wishart gave the home side the lead, and despite enjoying plenty of possession, The Gulls couldn’t find a way through a determined Stones backline.

Manager Gary Johnson made one change to the line-up that triumphed so impressively at Halifax last weekend, with Kalvin Lumbombo-Kalala taking the place of Jake Andrews who missed out completely due to injury. On the bench, forwards Ruairi Keating and Manny Duku were added to the matchday squad.

The match began at a decent pace, with both sides clearly given licence to attack.

On six minutes, home favourite Saidou Kahn’s break down the byline ended with a cross that Inny Akanbi couldn’t steer home from inside the box.

United hit back though, with two chances in quick succession.

On seven minutes, a dangerous Gulls free-kick saw the ball only half cleared. When the ball was pumped back into the box, the ball fell to Jamie Reid at the back post, however, the National League’s leading scoring only able to slice his volley over the bar.

Moments later, a swift attack saw Reid and Saikou Janneh combine to feed Kalala, who checked inside before sending his curling effort just wide of the post.

Just when Torquay were beginning to take charge, they fell a goal behind after a spot of misfortune.

Wishart showed a decent turn of pace to beat Wynter, however his shot across the face of goal appeared to be missing the finishing touch, before an unkind deflection off the retreating Matt Buse saw the ball end up in the back of the net in the 19th minute.

The Gulls picked themselves up and came close to equalising eight minutes later, however after Kalala fed Liam Davis to fire a shot wide, it soon emerged that Davis was unable to continue, with the ever-reliable left-back leaving the field to be replaced by Joe Lewis.

Despite the mounting setbacks, United continued to put together some good moves, albeit without reward.

Just past the half-hour, Ben Whitfield did well to feed Kalala, however the Frenchman’s threatening-looking strike was blocked by the home defence and the ball was cleared away.

Reid tried his luck at goal two minutes later, however the shot was straight at Jake Cole, whilst home goalscorer Wishart had appeals for penalty waved away at the other end.

The Stones’ defence did enough to keep their lead intact at the interval, with Torquay beginning the second-half looking to turn their territorial advantage into clear-cut chances.

As you would expect, Johnson’s men were pn the front foot following the restart.

A delightful move saw United miss a golden chance for parity in the 54th minute. A exquisite pass from Reid fed Janneh, who showed excellent vision to pick out Kalala, but despite being well-placed, he sent his powerful strike over the bar.

With the home side having been restricted to catching Torquay on the break in the opening stages, another deflection nearly saw The Stones profit for a second time, with Elokobi’s effort looping up and over Covolan’s bar.

In the 69th minute, United’s substitute left-back Lewis did well to find enough space to send in a dangerous cross across the box, with Noah Chesmain just managing to divert the ball behind, with United’s attackers looming.

Maidstone’s resolute defence were working overtime to stifle The Gulls’ increasingly frequent attacks, and with the clock ticking down, the home side bgan to go in search of a killer second goal, with Khan firing an effort wide of the upright from just outside the box.

Back at the other end, another lovely move saw Wynter send in another low ball into the point-blank territory, with Luke Pennell arriving in the nick of time to prevent the equaliser with seven minutes remaining.

It was to prove United’s last real chance as the match ended in frustration for Johnson’s men.

With their journey in the FA Cup over for another 12 months, the attention now reverts back to league business, with The Gulls continuing their assault on the National League top spots against Sutton at Plainmoor. Tickets are available here.