It was honours even at Meadow Lane, as a highly competitive encounter between two promotion-seeking rivals ended goalless.

Manager Gary Johnson made two changes to the side that triumphed over Boreham Wood in the FA Trophy on Tuesday evening, with goalscoring substitute Billy Waters and new signing Max Sheaf replacing Josh Umerah and Asa Hall.

The men in yellow started well, looking comfortable in possession, with a particularly slick move in the 4th minute between Dean Moxey and Ben Whitfield nearly seeing the latter played into space inside the 18-yard box.

Although the hosts soon settled, both sides largely cancelled themselves out during a tight opening half, with some resolute defending dictating that goalmouth action was kept at a premium.

There were a few hearts-in-mouths amongst the Torquay contingent on 18 minutes, as a back pass from Sam Sherring didn’t quite have enough on it, however Shaun MacDonald was alert enough to smother the ball at the feet of Kyle Wootton.

The first effort on target came at the midway through the first period, as a swift break from Johnson’s men culminated in Waters firing in a low drive from 22 yards out, however Magpies goalkeeper Sam Slocombe was on hand to gather the ball in front of him with relative ease.

A half-cleared header from a Notts defender did allow debutant Sheaf a brief view of goal on the half-hour, however his speculative effort drifted well wide of the far upright. 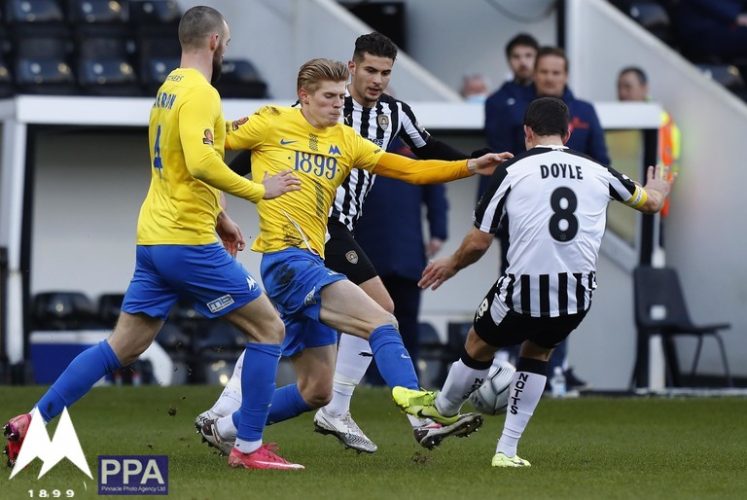 Soon after, the hosts nearly unlocked their own defence, as Whitfield’s right-wing cross forced Connell Rawlinson to get a touch on it inside the six-yard box, with the intervention nearly diverting the ball into his own net.

As a closely-fought first half edged towards the interval, it was Johnson’s side who appeared to be looking the more inventive, however the referee’s whistle ensured that both sets of players headed for the dressing rooms all-square.

Another bright opening from Torquay at the start of the second half nearly earned an instant reward, as Waters captalised on a moment of indecision from the home side to send in a strike from the edge of the box, however a defender’s boot prevented the goalbound effort testing the County custodian further.

The next ten minutes belonged almost entirely to The Gulls in terms of possession, although Notts winger Enzo Boldewijn did round one promising run off by firing a left-footer over MacDonald’s crossbar in the 54th minute.

The action soon moved back up to the other end on the hour though, as a superb ball from Aaron Nemane saw Whitfield dart in behind the County backline to send in an inviting ball across the face of goal, however substitute Umerah couldn’t quite make up the yards required to tap the ball into an unguarded net.

Although the match remained a tight encounter, there were some signs that both teams were beginning to up the ante in a bid to break the deadlock as the clock began to tick down.

Both sides exchanged chances either side of the 78th minute, with a ball into the United box forcing both defenders and goalkeeper to put their bodies on the line to keep the ball out, as MacDonald came up with an excellent block to keep out Jim O’Brien’s close-range effort. Moments later, Whitfield’s left-wing cross had a bit too much pace for Umerah to profit from, with the striker sending his point-blank header wide of the post.

With six minutes remaining, the same player went even closer. After finding space on the right of the box, Connor Lemonheigh-Evans put the ball into Umerah’s path, however from six yards out, he couldn’t quite adjust his feet in time to fire his side in front.

With a minute remaining, a Lemonheigh-Evans corner saw skipper Cameron finding enough space to beat a man and fire in a right-footed effort at the back post, however Slocombe made a smothering save.

That miss looked particularly costly a minute later, as a home free-kick directed towards the back post was turned back towards Wootton near the penalty spot, however County’s top-scorer blazed wide with the goal at his mercy.

Defeat at that late stage would have been incredibly harsh on United though, who had more than played their part during the ninety-plus minutes that proceeded that miss.

A point apiece then, with The Gulls having the perfect opportunity to follow that up in just three days’ time when second-placed Sutton arrive in town to take on Gary Johnson’s side at Plainmoor.