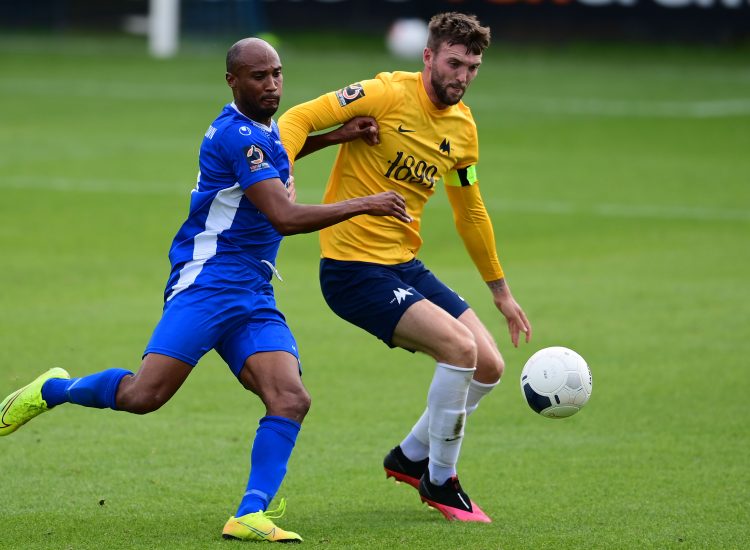 Torquay United slipped to their first defeat of pre-season on Saturday, as Chippenham ran out 2-0 winners at Plainmoor.

Bradley Ash’s effort just prior to the interval gave Town the lead, with the Wiltshire side doubling the advantage with 17 minutes remaining through David Pratt.

After a scrappy start that produced little in the way of chances, it was United who fashioned the best opportunity midway though the opening period.

After a link-up between Andrew Nelson and Matt Buse won United a corner in the 22nd minute, Connor Lemonheigh-Evans’ delivery towards Kyle Cameron was perfect, with The Gulls’ skipper seeing his header bounce down and up into goalkeeper Will Puddy’s hands.

Five minutes later, it was the visitors who threatened, with Ash’s curling effort from 20 yards out forcing Covolan to tip the ball over the crossbar.

Chippenham were certainly providing Torquay with a challenge during a closely fought first 45 minutes, with Ash featuring prominently throughout.

In the 41st minute, his near-post header from a corner forced Covolan into a superb low save, before the same two players interacted again a minute later, this time with a different outcome.

There initially looked little danger as United’s Brazillian ‘keeper went to gather a low deflected strike, however with the ball slipping out of his grasp, Ash nipped in to slip the rebound into the back of the net and give his side an interval lead.

Following the break, United went in search of an early equaliser, with Lemonheigh-Evans’ chip into the box finding Ben Whitfield in space on 53 minutes, however his effort was comfortably claimed by Puddy.

The introduction of Asa Hall and Jake Andrews just past the hour mark provided the side with a welcome boost, however shortly afterwards, Town extended their lead.

On 73 minutes, a long ball forward forced the retreating Dean Moxey into diverting a back-header towards Shaun MacDonald, however the ball didn’t quite have enough on it, with Pratt capitalising and slotting into the unguarded net from ten yards.

Andrews nearly halved the deficit moments later with a trademark free-kick on the edge of the box, however his luck was out, with the ball cannoning off the post.

United continued to force Chippenham back in the closing stages with reward, however another 90 minutes under the players’ belt will come as some consolation to a side now fully focused on the commencement of National League fixtures in a fortnight’s time.

With United’s Plainmoor pre-season activities now complete, Johnson’s side will head to Bath City next Saturday for their final warm-up, prior to the real thing kicking on October 3rd.