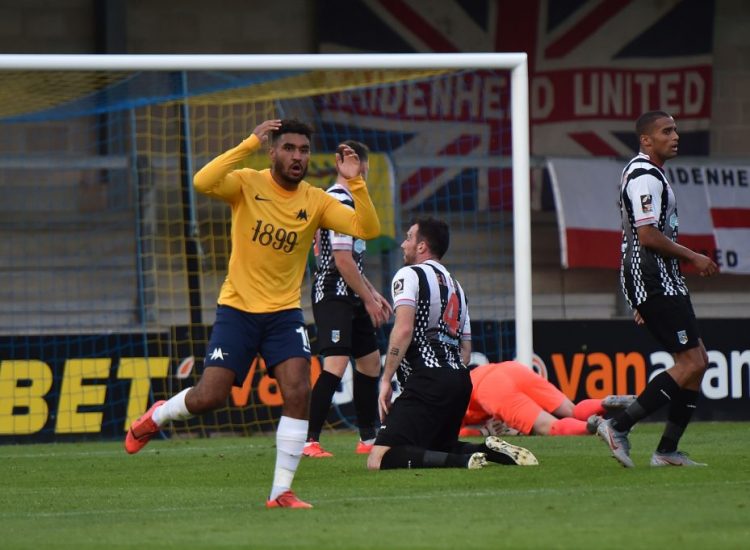 United suffered a frustrating evening at Plainmoor, as they slipped to their first home defeat of the season.

Despite dominating possession for long periods, goals in each half from Josh Kelly and Shamir Fenelon saw Maidenhead leave Devon with all three points.

Gary Johnson named an unchanged line-up to the side which secured a 3-3 draw at Bromley on Saturday, and begun the match in top gear.

The pace and energy shown by The Gulls shown in the early stages was a delight to behold, with Connor Lemonheigh-Evans and Jamie Reid both forcing Taye Ashby-Hammond into action in the visiting goal within the first ten minutes.

In the 17th minute United nearly got the goal their play so richly deserved.

A goalbound effort from Lemonheigh-Evans was blocked from point-blank range, and from the resultant corner, Jean Yves Koue Niate headed the ball into the path of Kyle Cameron, who saw his header cannon off the crossbar.

The pressure was relentless at this stage, as Reid’s 21st minute rising drive looked to be heading for the top corner, with Ashby-Hammond having to dive full-length to claw the ball to safety.

Twice within the next five minutes Reid threatened again, with the United striker sending two more efforts narrowly wide via head and foot.

Then on 31 minutes, disaster struck.

Torquay’s backline failed to cut out a cross-field ball, leaving Ryan Upward to send in a low drive that Shaun MacDonald could only parry, with Josh Kelly firing the loose ball into the roof of the net.

The goal appeared to knock United out of their stride, and they failed to regain their rhythm until the opening stages of the second half.

Seemingly refreshed after the interval, Johnson’s men once again got stuck into the opponents, with Reid, on a Hall through-ball, forcing Ashby-Hammond into another fine save inside the opening 20 seconds.

The Gulls were again running the show, with a nice display of close control and passing, but the final ball just eluded them as the visitors held firm.

Time and again, Kalvin Lumbombo-Kalala threatened to provide the key with his trademark tricky skills on the right-wing, with his teammates just unable to apply the finishing touch.

In the 89th minute, the Frenchman nearly took matters into his own hands, as he got onto the end of a Reid through-ball, but for once his first touch was too heavy, allowing the ‘keeper the chance to smother the shot.

It was to prove their last real chance, as following a corner, Maidenhead punished United further, with Fenelon running the length of the field to wrong-foot MacDonald and seal the game.

United are back on their travels again on Saturday, as they make the trip to Dover looking to get back to winning ways.