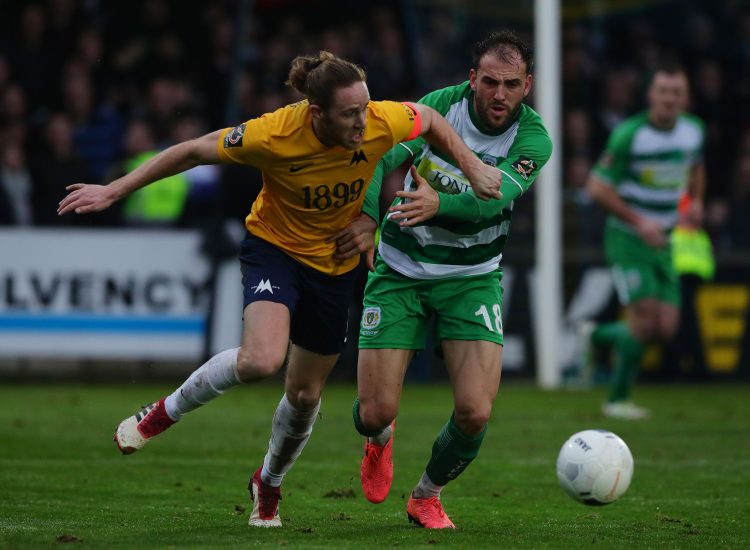 United went down to defeat against Yeovil Town at Plainmoor as the side from Somerset emerged with all three points.

Despite an early red card for Glovers striker Chris Dagnall, the visitors took the lead through Courtney Duffus, and despite The Gulls’ best efforts, Rhys Murphy sealed the points with a second goal in injury time, following a red card for Jean-Yves Koue Niate.

Following Saturday’s superb 4-1 win over Woking, manager Gary Johnson was afforded the luxury of naming an unchanged side, with the team showing six alterations to the starting line-up that lost to The Glovers at Huish Park on Boxing Day.

United started well, and nearly made an early breakthrough when Ben Whitfield ran into space on the left-hand side of the box, however rather than shooting for goal, his pull back towards Jamie Reid was cleared away by the Town defence.

A resultant spell from Yeovil followed, however as Lucas Covolan claimed a loose ball following a corner in the tenth minute, Dagnall apppeared to follow through on United’s keeper. After consulting with his assistant, the referee produced a straight red card to give Johnson’s men a numerical advantage for the second game running.

Torquay had little chance to test that advantage though, as just six minutes later Town took the lead. A high ball into the box was only scuffed clear by Koue Niate, leaving the ball to fall into the path of Duffus on the right-hand side of the box, where he directed a low angled drive into the far corner of the net.

Having been shaken out of their early stride, United struggled to regain their authority, however a smart volley from Ruairir Keating on the edge box dipped just wide of the upright, with Stuart Nelson in the Yeovil goal well beaten.

Johnson’s men thought they had earned themselves a penalty ten minutes later as Connor Lemonheigh-Evans held off the heavy attentions of a Yeovil defender before jinking his way into the box before falling under a clumsy challenge from another Town defender. The referee blew to signal the foul, but pulled play back for the first offence well outside the penalty area.

It wouldn’t be until the dying stages of the first half before United threatened again, with defenders Kyle Cameron and Koue Niate combining near goal to allow the latter to fire a low effort wide of the near post from the edge of the box.

Johnson’s side took some time to impose themselves after the restart, however it was Keating again who showed remarkable persistence in holding off a number of challenges around the 18-yard line to fashion a decent effort a goal, with Nelson gathering in the 56th minute.

Whitfield, with an excellent bit of wing play down the left spotted Reid running across the face of goal, however for once, Torquay’s leading marksman didn’t quite get his angles right, and the ball sailed past the post from ten yards out.

Just when The Gulls were starting to ask a few questions of the Town defence, a foul by Niate on Rhys Murphy saw the referee produce a second red card of the game, with the personnel now evened up with eleven minutes remaining.

With time running out, United upped the pace and came withing inches of securing an equaliser, when substitute Lloyd James sending in a superb low curling effort towards goal, with Nelson just doing enough to parry the ball behind.

There would be no more chances for parity though, and in the last minute of injury time, a Jake Andrews pass was cut out and eventually played across to Murphy in space in the box, who dinked the ball over Covolan to make it 2-0.

The festive period may be coming to an end, but the matches continue to come thick and fast for United, with another three points on offer on Saturday as Johnson’s men head for East London to take on Dagenham & Redbridge.