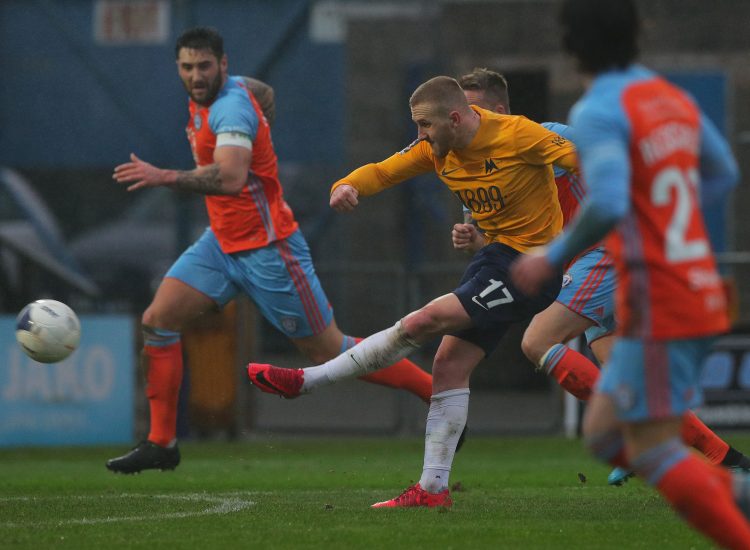 United bowed out of the FA Trophy following a 2-1 defeat against FC Halifax Town at Plainmoor.

United made three changes to the side which drew with Dagenham & Redbridge last Saturday, with new signings Jackson Longridge and Gary Warren joining Aaron Nemane in the starting line-up at the expense of Jake Andrews and Ruairi Keating, with Saikou Janneh having returned to Bristol City.

After a nip-and-tuck first twenty minutes, United went on to boss the first half, with a swirling wind at their backs assisting them in peppering Sam Johnson’s goal.

Asa Hall was the first to test the Town glovesman, with his 20-yard curling effort forcing Johnson to turn the ball round the post in the 21st minute.

Five minutes later and Johnson could only watch on as a slick move involving Lemonheigh-Evans and Aaron Nemane ended with Jamie Reid steering the ball narrowly wide of the far post.

The Gulls were enjoying an good spell, and just short of the half-hour it was Kyle Cameron who rose unmarked to fire a header towards the top-corner of the goal from a corner, however Johnson was once again equal to it.

With the first half ending goalless, Halifax opened the scoring nine minutes after the restart.

A ball from the right was initially headed clear by Robbie Cundy, however the ball fell kindly to Jack Redshaw on the edge of the area, with the Town man duly feeding Sho-Silva to slot home from close range.

Johnson’s side nearly responded within minutes, as a dangerous corner into the box saw debutant Warren’s bicycle kick cleared off the line, before Nemane followed up by shaving the foot of the post.

The task though got much harder in the 67th minute as the visitors doubled their lead in fortuitous fashion.

After crowding out Staunton on the edge of the penalty area, his shot took a wicked deflection off a United man to divert the ball out of Lucas Covolan’s grasp and into the back of the net to make it 2-0.

United needed to respond to keep the game alive, and five minutes later they did so with a moment of brilliance from Lemonheigh-Evans.

Collecting the ball in a tight space on the edge of the box, the on-loan Bristol City midfielder twisted and turned his way into a central position with defenders in his wake, before firing a low drive into the net from ten yards.

After being thrown a lifeline, Torquay pressed on in search of an equaliser, and they nearly got it with six minutes remaining, as Reid’s header forced Johnson to arch back and divert the ball over the crossbar.

The full-time whistle ended United’s Trophy participation for another year, with the focus now firmly fixed on the side making their way back up the National League table, with the first opportunity presenting itself with a trip to AFC Fylde next Saturday.