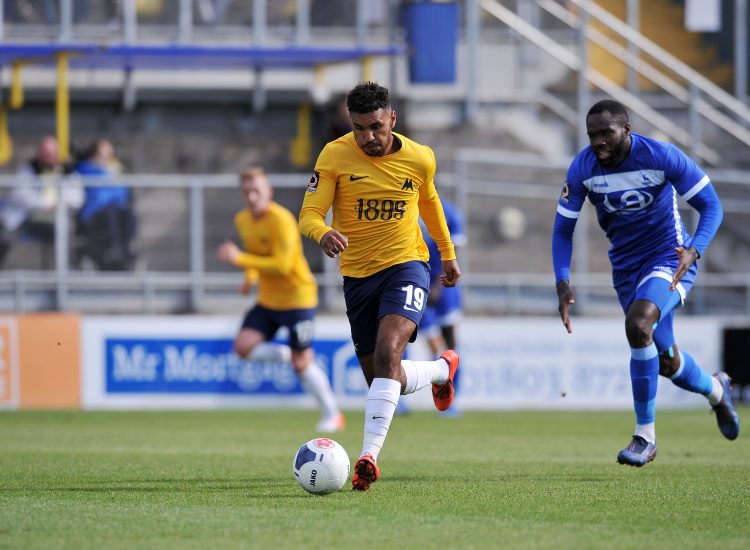 United slipped to their first defeat in four games, as Hartlepool triumphed at Plainmoor on Saturday.

After Jason Kennedy had headed the visitors into a first-half lead, Jamie Reid’s second-half leveller threatened to turn the game the way of Gary Johnson’s men. However a breakaway goal from Pools’ defender Peter Kioso saw them leave Devon with all three point.

After naming an unchanged line-up from the 2-2 draw at Barnet, it was the away team that begun the game the brighter, although Gulls keeper Lucas Covolan Cavagnari had little to worry about early on inside the first fifteen minutes.

Twice captain Asa Hall threatened to work his counterpart Ben Killip in the Hartlepool goal, but having failed to properly connect with Armani Little’s free-kick in the 7th minute, he then proceeded to fire over another effort a minute later.

On 16 minutes the balance of the game swayed the way of Craig Hignett’s side, as they profited from a corner.

Having failed to win the initial flick-on in the box, Kennedy was on hand to head the ball past Cavagnari from 8 yards.

It nearly got worse for Torquay in 23 minutes, but to their relief, Toure’s ‘goal’ was flagged offside.

The Gulls nearly made the most of the let-off on 33 minutes, as Reid missed a golden opportunity to equalise. After getting in behind the visiting backline though, he dragged his shot narrowly wide.

Following the break, Reid made up for the uncharacteristic miss in emphatic style.

On 51 minutes, some super link-up play from Little and Liam Davis, saw Reid in space on the edge of the box. Reid looked up and picked his spot to fire high into the roof off the net, giving Killip no chance.

Having drawn level, the Yellow Army were hoping their side would go on to force the winner, however despite dominating the remainder of the match, the final ball didn’t fall the way of Reid and substitute Manny Duku, and they were hit on the counter with ten minutes left.

After soaking up a spell of United pressure, Hartlepool broke upfield, and after spreading the ball across to Kioso on the edge of the box, he fired a firm drive past the dive of Cavagnari and into the net.

Unperturbed, United continued to take the fight to their opponents, and when one delicious Little cross found the head of Koue Niate, it looked like a point had been saved. Unfortunately, the Frenchman’s header was straight at Killip and the chance was gone.

It proved to be a disappointing afternoon for Johnson’s men, but with a trip to league leaders Woking on Tuesday evening, they have no better stage on which to put things right.