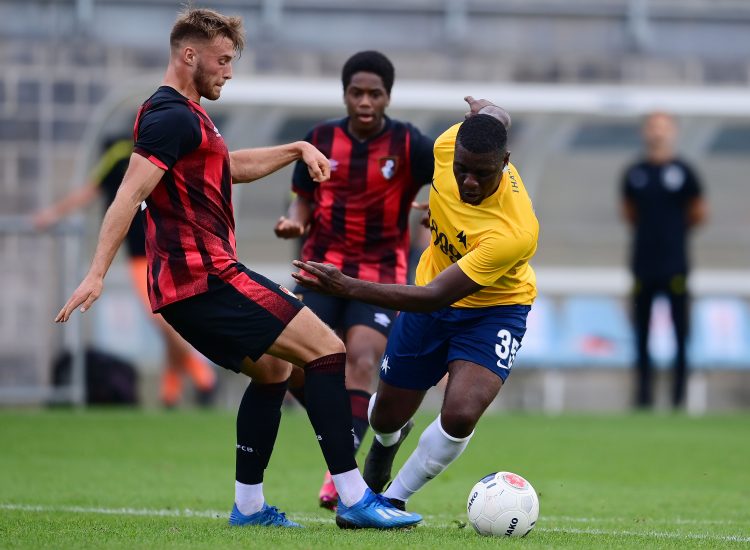 Another blank score sheet at the break failed to discourage Torquay, however a three-goal blast in the second half saw the hosts run out clear winners, thanks to goals from Dean Moxey, Josh Umerah and Olaf Koszela.

Whilst the Hemel Hempstead match took a little while to warm up, The Gulls wasted little time in creating their first chance, with Kyle Cameron forcing an off-the-line clearance inside the opening minute.

That proved to be very much a sign of things to come during the opening stages, with Ben Whitfield, Danny Wright and Connor Lemonheigh-Evans particularly prominent as United forced Bournemouth’s young defenders back against their own goal. 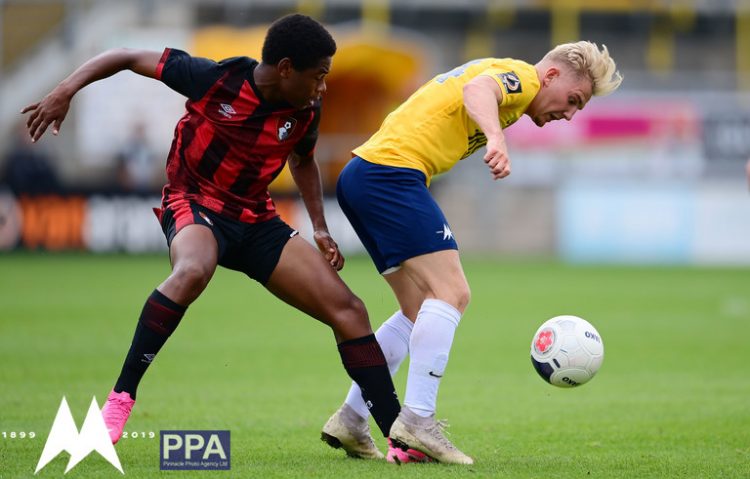 A succession of corners was further evidence of Torquay’s dominance, with Aaron Nemane also coming close, as his low drive was deflected wide of the post just short of the ten-minute mark.

The visitors were still alive to any opportunities that fell their way though, and after losing possession in the 19th minute, a ball over the top found Cherries attacker Ryan Glover bearing down on goal inside the 18-yard box, however close attention from Matt Buse eventually saw the youngster fire wide of the target.

Following his impressive showing against Hemel, Umerah’s presence was once again proving to be a focal point in attack, with the striker seizing on the opportunity to fire in a turn and shot just past the half-hour. Unfortunately though, the effort was just too close to ‘keeper Cameron Plain’s palms.

At the other end, the visitors were still posing a threat, and following a neat spell of passing in the 39th minute, it was Ben Wynter that was forced to come up with a last-ditch challenge to rob Jake Scrimshaw of the ball, with the goal gaping.

Just before the interval, Johnson’s side created the best opening of the game. A delightful back-heel from Umerah found Wright in space. Despite a stumble, he did enough to lay the ball back into the path of his striker partner, who crashed to the ground inside the penalty area. The trailing leg of a defender looked particularly guilty, however the referee remained unconvinced, and the whistle signalling the break soon after.

The second half saw the team in yellow again starting the stronger, with Lemonheigh-Evans forcing Plain to gather at the second attempt, after Wright’s strength allowed Connor to jink his way across the face of the 18-yard box, before sending in a low drive.

Nine minutes later, the young Cherries announced their intentions, with a cross-field ball ending with O’Connell warming the gloves of Shaun MacDonald.

Johnson’s men looked to have opened the scoring on 57 minutes, as a hacked clearance was pumped straight back into the danger area after a brave header from Koszela, however, Umerah’s equally impressive aerial effort was ultimately irrelevant, with the officials adjudging his header was offside.

They didn’t have to wait much longer though, as Torquay responded with a swift double.

With Cameron looking threatening on almost every corner, Lemonheigh-Evans once again found United’s captain from his latest flag-kick, and although his header was heading off target, Moxey followed in from close range to break the deadlock in the 60th minute. 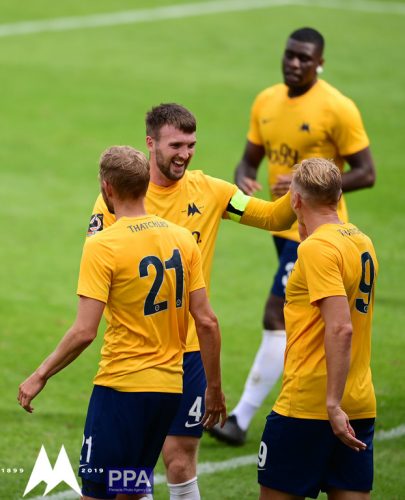 Just moments later, the lead was doubled. A superb driving run and shot from Lemonheigh-Evans forced Plain into action, however his parry fell kindly into the path of Umerah, who responded by volleying home the loose ball via a retreating defender.

As is so often the case with pre-season fixtures, a raft of substitutes disrupted the flow of an otherwise entertaining encounter, however with nine minutes left on the clock, The Gulls extended their advantage further.

Umerah’s striking instinct saw him divert his left wing possession towards the penalty area, before firing the ball across the box to the onrushing Harry Bamforh. The United trainee let fly with low shot, and Bournemouth’s glovesman – who was enduring a busy second period – could only palm the ball towards Koszela, who made no mistake to make the final score 3-0.

With two of United’s four behind-closed-doors now behind them, Plainmoor’s pre-season activity is rounded up on Saturday as Chippenham Town head to Devon for a 3pm kick-off. The Yellow Army may have to wait a little longer to return to the terraces, however, on this display, United are certainly looking good prime time viewing!