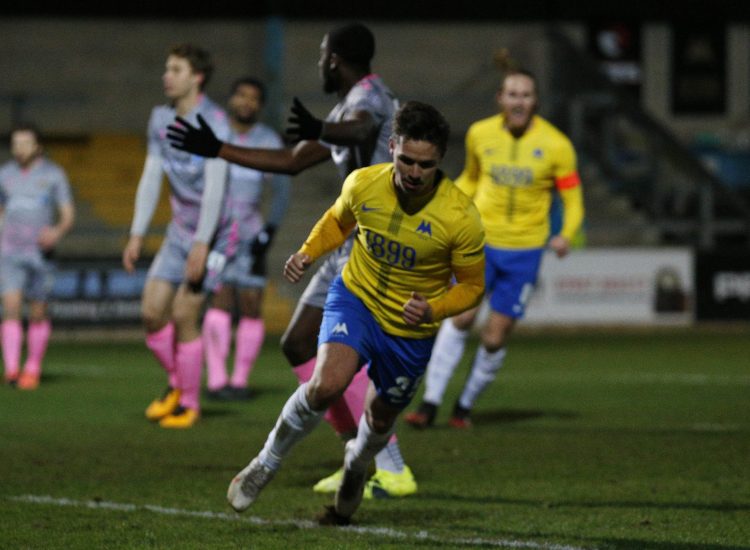 Billy Waters’ late intervention salvaged a point for United, as their second-half onslaught eventually paid off against Wealdstone at Plainmoor.

Jacob Mendy’s first-half strike gave the visitors a lead they held right up until injury-time, as Waters once again denied The Stones, to earn Torquay a share of the spoils they richly deserved.

Manager Gary Johnson made two changes to the side that made Trophy progress at Southport’s expense on Saturday, with Asa Hall and Sam Sherring replacing Armani Little and Dean Moxey.

The Gulls were certainly quickest out of traps, creating three chances within the opening couple of minutes.

Following a foul on Waters just outside the box with barely 60 seconds played, Ben Whitfield’s free-kick from the left flashed across the face of goal, with a defensive head seeing the ball diverted behind.

Although Jake Andrews’ subsequent corner was headed off-target by Sam Sherring, the ball was soon heading straight back towards the visiting goal, with Whitfield appearing on the right this time, to fire a stinging effort wide of the post.

Although Torquay were bossing the early stages, Shaun MacDonald had to be alert in the ninth minute, as a short back pass nearly presented itself the ball on a plate to a visiting forward. Thankfully MacDonald’s swift sliding intervention in the right-back area saw any potential danger averted though.

A minute later, and normal service was resumed as Waters broke into enemy territory before feeding the ball centrally towards Whitfield just outside the box, however his third effort of the evening was clawed away by Stones stopper Harvey Istead, with his defensive colleague Jerome Okimo hacking the ball away from the lurking Josh Umerah.

After such a frantic start, things settled somewhat thereafter, as both sides started to become accustomed to the very cold – not to mention windy – conditions.

Neither side were creating too much in front of goal, before the visitors seized the initiative by taking the lead in the 36th minute.

With Johnson’s men committed to attack, the move broke down, allowing Wealdstone to launch a swift counter through Mendy down the right hand side. His pace was enough to take him within striking distance, and from 20 yards out, he fired a low drive past MacDonald and into the net.

United came close to levelling things up just before the break, as Waters and Cameron combined to allow Andrews to send in a drive from 22 yards out, and with Istead spilling the ball into the path of Sam Sherring, it was to the watching Yellow Army’s disappointment that the point-blank effort was sent wide of the post.

0-1 at half-time then, and plenty of work to do in the second half. 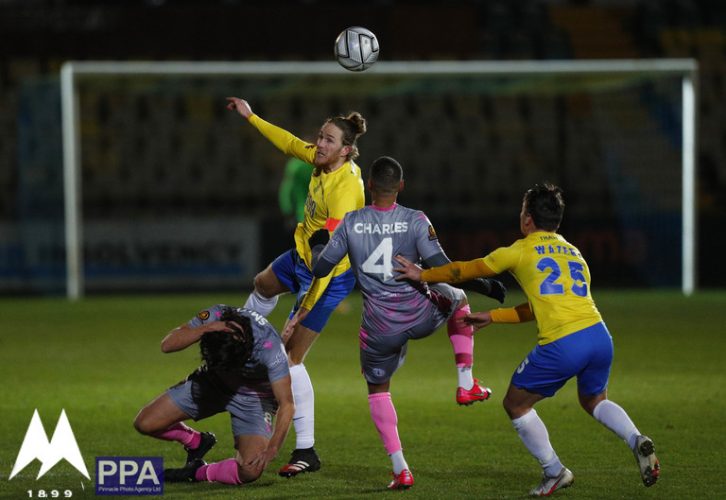 Following the change of ends, the men in Yellow instantly set about restoring parity, as they set up camp inside the opposition half.

Whitfield was making plenty of in-roads down the left, and after seeing a couple of crosses go begging, the United winger took matters into his own hands on 57 minutes, sending a dipping effort just past the far post.

There was plenty of goalmouth action as The Gulls visibly upped the ante, however some last-ditch defending was proving just enough to keep the visitors in front as the game ticked past the hour mark.

In the 71st minute, a nice move between Waters and Joe Lewis resulted in the ball being worked into Adam Randell inside the box, but his strike was too high to trouble Istead, with the ball clearing the crossbar.

Things were getting increasingly desperate in the Wealdstone penalty area, and with 15 minutes remaining it took both a recovering leg and decent save by the ‘keeper to deny first Kyle Cameron, and then Josh Umerah, as a throw into box nearly caught The Stones napping.

In the 79th minute, a Whitfield corner was directed perfectly onto the head of Umerah, however with ball seemingly destined for the back of the net, this time an off-the-line clearance from Lench prevented the scores being levelled.

A minute later, some neat work from Koszela saw a half-clearance fall to Randell, but o this occasion, the upright came to Wealdstone’s rescue, as the ball simply refused to go in.

To their credit, The Gulls kept plugging away, and just when it looked as though the evening would finish without any reward, a measure of justice was applied to the scoreline.

When Asa Hall’s strike from the edge of box was diverted away from goal in the 91st minute, it looked like Wealdstone would again escape. However, for what seemed the first time all night, the ball drifted kindly into the path of Waters, who drilled the ball low into the net to make it 1-1, and seal a point. 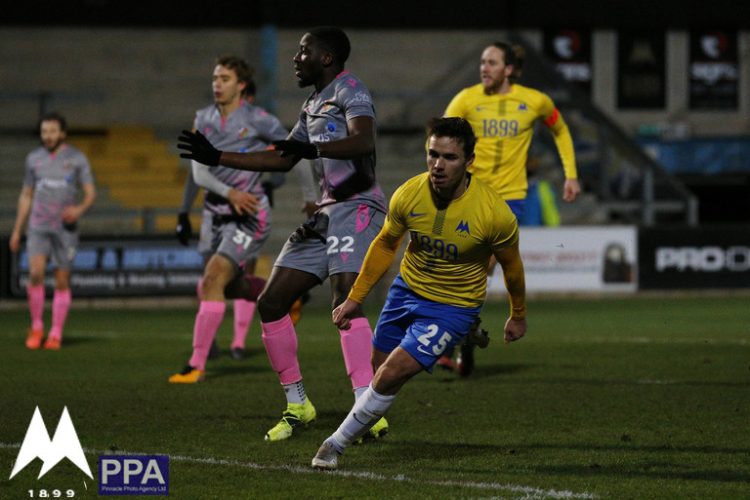 It might not have been quite the result they were after, however it was the very least they deserved, ahead of a testing trip to old rivals Woking on Saturday.