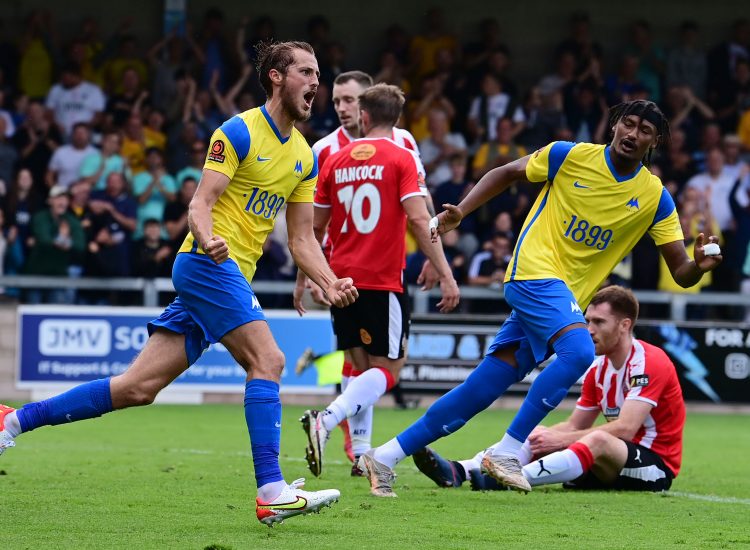 There was disappointment at Plainmoor on Saturday, as United slipped to defeat against Altrincham.

Marcus Dinanga and Connor Kirby gave the Robins a first-half advantage, and although Joe Lewis briefly reduced the arrears, Altrincham sealed the win with a third late on from Toby Mullarkey.

For United’s first match of the new campaign, manager Gary Johnson included six of his summer additions in the starting XI, with Mark Halstead, Tom Lapslie, Ali Omar, Keelan O’Connell, Gabby Rogers and Dan Holman making the cut, whilst four more new boys – Dan Martin, Chiori Johnson, Klaidi Lolos and Marcin Brzozowski – had to be content with a place on the substitutes bench.

The match was barely 30 seconds old when one of those, Holman, registered the first shot of the game. His diagonal low drive from 20 yards may have proved ambitious, and ultimately sailed well wide of the far post, but it certainly signaled his side’s early intent.

A nice through ball from Armani Little right in front of Bristow’s Bench initially saw Rogers drive centrally towards goal with little resistance on eight minutes, however a promising move ultimately ended in disappointment, with the former Yeovil man’s effort from outside the box drifting high and wide, following the belated attentions of an Alty defender.

The ball hardly left the visiting half during the first fifteen minutes, such was The Gulls’ territorial dominance, however their failure to register a shot on target was exploited on 14 minutes.

In what was their first serious attack of the game, a cross from the right dropped straight into the path of the unmarked Dinanga eight yards out, and despite some protestations from the yellow contingent, the Altrincham man ignored those appeals to slip the ball under Halstead, and give the visitors the lead.

O’Connell looked to be shepherding the ball out of play, however after being robbed inside the 18-yard box, the ball was sent towards Kirby by the penalty spot, with his deflected effort squirming past United’s goalkeeper to make it 0-2.

The Yellow Army was stunned into silence, and their team was forced into more urgent action.

Roger’s trickery down the right wing was looking to be the most likely pathway back into proceedings, with one left-footed cross finding the head of O’Connell at the back post, however, although the Torquay winger rose well, he could only direct his header into the side netting on the half-hour. 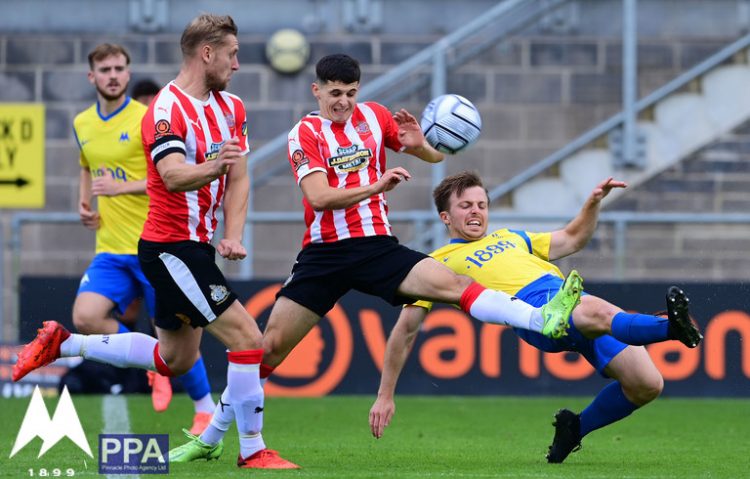 United’s efforts intensified, with Holman sending in a fierce drive on the turn on 37 minutes that forced Tony Thompson into his first save of the game.

Altrincham’s defending was getting increasingly deep – and desperate – as the game headed towards the interval, however the ball continued to find a red & white shirt in the nick of time, as a string of dangerous crosses into the box just lacked the finishing touch.

The two-goal deficit remained in place as the players headed for the tunnels, leaving Johnson’s men with plenty of work to do.

As expected, it was The Gulls who were on the front foot following the restart, although the visitors looked a constant threat on the break, with some swift counter attacks almost catching United out.

Things turned a little scrappy thereafter, with Altrincham eager to break the game up wherever possible, with the men in yellow struggling to impose themselves for sustained periods.

On 70 minutes, a deep cross from Ben Wynter was directed towards Holman, however he was unable to direct his header anywhere other than over the bar, with Rogers following suit from much further out shortly after.

With Johnson’s men in desperate need for something to hold onto, their persistence eventually paid off with sixteen minutes to go.

Little’s retaken free-kick by the corner flag was floated towards the penalty spot, and after a spot of pinball inside the six-yard box, it appeared to be Lewis who bundled the ball home.

Sadly though, any hope was soon extinguished just a shade over ten minutes later.

With Torquay minds intent on restoring parity, Altrincham launched a foray downfield. With the ball being switched to the left hand side, a loose ball fell into the path of Mullarkey, who steered the ball past Halstead to seal the points for the away team.

Not the result we wanted, however no team is better placed than United to know that the National League season is a marathon, rather than a sprint, with Johnson’s side facing their next test at Notts County in just seven day’s time.