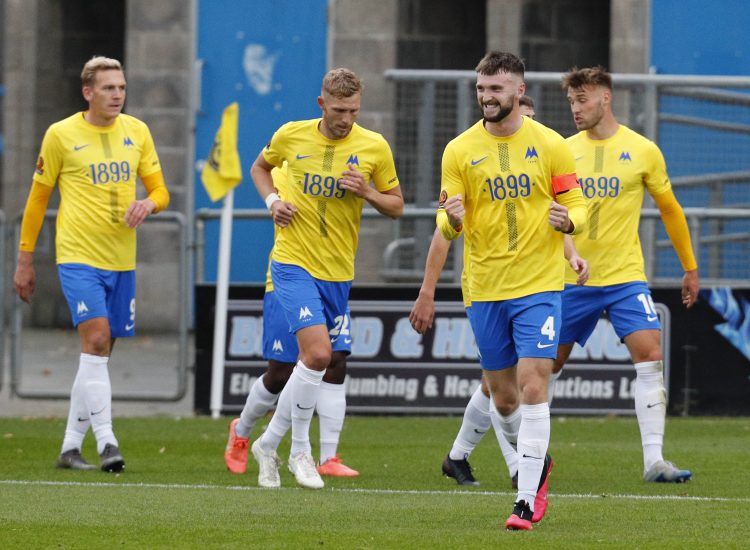 Two goals from skipper Kyle Cameron were enough to secure all three points against Dover at Plainmoor on Saturday.

Gulls skipper Kyle Cameron’s first-half double saw his side two-goals up at the break, and it was a lead United never looked like giving away, with the 2-0 victory enough to send them top of the league at 4.45pm.

United manager Gary Johnson named an unchanged line-up, showing faith in the same side that secured that late, late win against Chesterfield at Plainmoor on Tuesday evening.

The first chance of the match fell the way of Torquay on three minutes, as Louis Britton took a high ball down with ease, before playing Ben Whitfield into space on the left-hand side of the box, with his right-footed strike forcing a decent gather from Mersin in the opposition goal.

The visitors responded with a dangerous set-piece seven minutes later, as Jack Munns’s free-kick caused some disruption amongst The Gulls’ backline, with Bayli Spencer-Adams’ volley from 10 yards out warming the palms of Lucas Covolan.

After shots from Cameron and Adam Randell were deflected away from goal, United began exerting some even stronger pressure, with Cameron seeing his downward header cleared off the line in the 16th minute, before a Connor Lemonheigh-Evans piledriver a minute later forced ‘keeper and defence to act quickly to repel the danger.

United just kept on coming, with Whitfield’s left-wing cross finding the head of Britton, however his header drifted just wide. 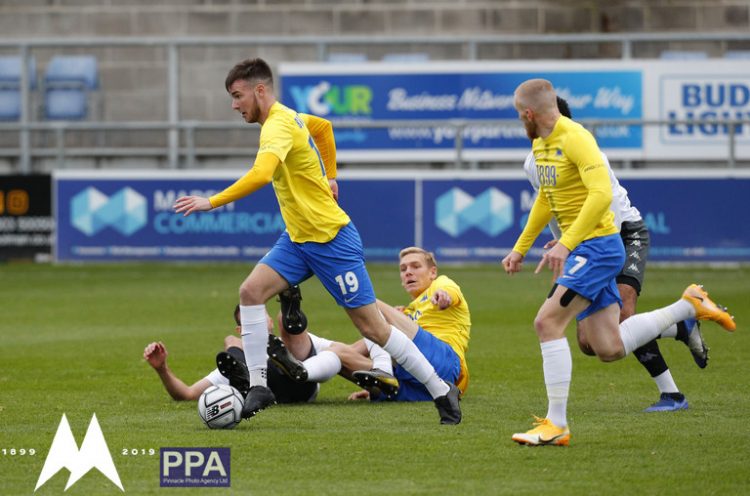 In the 19th minute, the Lemonheigh-Evans – Cameron flag-kick routine was again evident, with the skipper only denied this time by Mersin’s low parry.

Athletic, clearly grateful to still be on level terms, began to impose themselves, and nearly took a barely-threatened lead midway through the half, with a low cross from the right just eluding Thomas Bramble inside the six-yard box.

The 26th minute finally brought the breakthrough, through an increasingly likely source.

Having only partially cleared their lines, the ball found its way to Britton wide on the right wing. His cross-shot could only be palmed up into the path of the lurking Cameron, who put his earlier near-misses behind him to head home from eight yards.

On the half-hour, it was nearly 2-0, as Aaron Nemane’s run ended with a firm left-footed drive that cannoned off the foot of the post. Moments later, Britton scuffed a close-range effort wide of the upright, as United continued to turn the screw.

Just when it looked as though The Gulls would have to satisfy themselves with just the one-goal advantage at the break, they struck again. 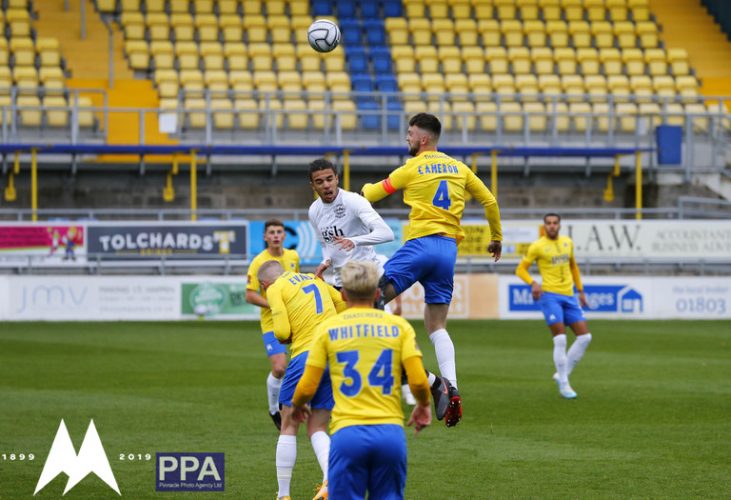 Lemonheigh-Evan’s corners were beginning to find their targets with increasing regularity, and with Cameron once again rising highest, it was little surprise when his powerful header found the back of the net to double United’s advantage.

Not content with that, Torquay continued to pile forward, with Randall seeing his superb free-kick tipped over the bar, before Britton’s close-range follow-up from another Randell strike found it’s intended destination, however there was no addition to the score, with the effort disallowed for offside.

So, 2-0 at the break, and there could be little arguments with the scoreline, despite a committed performance from the visitors.

The second period started just as Johnson would have intended, with his side continuing on the front-foot.

They came within inches of extending their lead further in the 53rd minute, as some classy play from Dean Moxey down the left saw him deliver a threatening ball across the face of goal that Nemane met at point-blank range, however, the pace on the ball saw his rattle the far post.

Still the men in yellow came pouring forward, with Danny Wright the next to face frustration at the hands at the hands of the visiting goalkeeper, as his goalbound volley was palmed away two minutes later.

Wright was denied again shortly after, as the combination of Whitfield’s wing play and Lemonheigh-Evan’s outside-flick found United’s towering frontman firing in a close-range effort, however a Dover defender threw himself at the ball, doing just enough to prevent further damage inflicted. 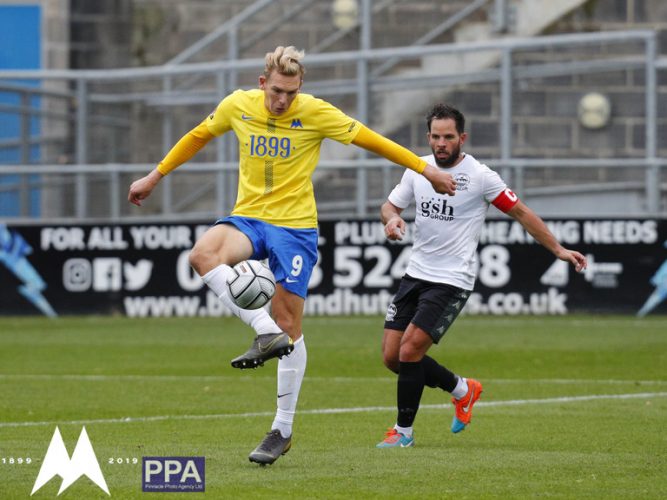 Randall again looked for the spectacular in a bid to grab the goal his side were threatening, however his 35-yard thunderbolt didn’t quite dip quickly enough.

2-0 remains a dangerous scoreline though, and Covolan had to be alert in the 75th minute, as Munns wriggled free of Torquay’s defenders long enough to force a low save from United’s Brazilian stopper.

Eight minutes later, and the pendulum had shifted back United’s way, with a corner finding the near-post target of the stooping Asa Hall, with a combination of goalkeeper, woodwork and scrambling bodies somehow seeing the ball remain inches short of crossing the goalline.

Never at any point did Johnson’s side threaten to sit on their lead, as they continued their pursuit for further reward right up until the final whistle.

No further goals were forthcoming though, with The Gulls sealing a highly entertaining 2-0 win to make it four wins out of the first five, and with it – for now – a place at the top of the National League tree.

After a frantic start to the 2020/21 National League campaign, Johnson’s side now have a full week to focus on their next challenge, with United facing a trip to Sholing for the FA Cup 4th round qualifying tie next weekend.

For now Yellow Army, sit back and enjoy!