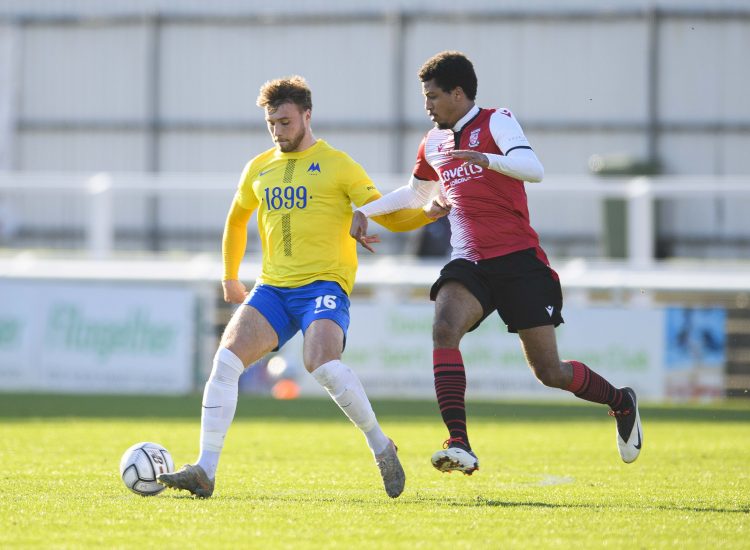 United’s run in this year’s FA Trophy ended at the quarter-final stage, as Woking emerged as narrow winners at the Laithwaite Stadium.

After Asa Hall’s early penalty was saved by Craig Ross, Jamar Loza scored the game’s solitary goal late in the first half. Despite going close to levelling on a number of occasions, before seeing a last-gasp ‘equaliser’ ruled out, Woking just about held on to take their place in the last four of the competition.

With manager Gary Johnson’s selection plans once again hampered by injuries and suspension, there were two changes to the starting line-up that triumphed at Solihull. QPR loan goalkeeper Marcin Brzozwski filled the void in between the posts following Shaun MacDonald’s late red card on Tuesday night, whilst Max Sheaf took the place of Joe Lewis, as the gaffer was once again forced to shuffle his pack.

The first chance of the game fell the way of United with just a minute on the clock.

Adam Randell’s dart upfield from right-back ended with a cross that was only half-cleared to the edge of the box, leaving Ben Whitfield with a decent sight of goal, however he fired his effort over the crossbar.

The hosts soon created an opportunity of their own though, with Jake Andrews forced to clear Moussa Diarra’s header of the goalline, as The Cards went close to breaking the deadlock from a corner barely 60 seconds later.

It remained end-to-end stuff for the next few minutes, before Torquay were awarded a golden opportunity to take the lead via the penalty spot on 13 minutes.

A lovely move down the right ended with Randell feeding the ball into Connor Lemonheigh-Evans on the very edge of the box, and with Diarra’s challenge seeing the Woking defender grab plenty more man than ball, leaving the officials to signal a spot-kick. 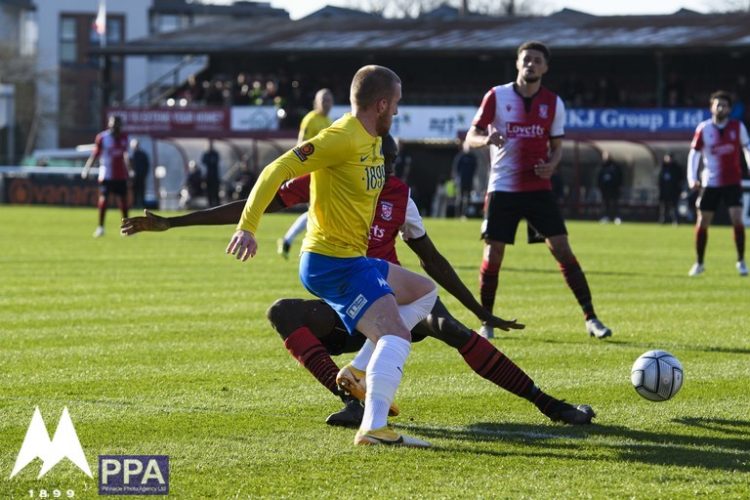 Hall, so consistent from the spot recently, fired the ball low to Ross’ left, however this time the ‘keeper guessed correctly to keep the match scoreless.

At the other end, The Gulls’ new man custodian was called into real action for the first time in the 21st minute, with Loza cutting inside from the left to send in a curling right-footed effort that bounced just in front of Brzozwski, however the Polish stopper was equal to it, parrying the ball behind.

Three minutes later, and Torquay went close once again. Billy Waters, down by the corner flag on the right, threaded an excellent pass into the path of Sheaf inside the box, and with the Hull City loanee beating Ben Gerring to leave him with just Ross to beat inside the six-yard box, the home glovesman once again came to his side’s rescue to palm away Sheaf’s poke towards goal from point-blank range.

There was no let-up in the pace of the game as the match headed towards the interval. United were certainly looking the more inventive side when in possession, however it was the hosts who took the lead in the 38th minute.

Loza, with his back to goal midway inside the Gulls half, turned Ben Wynter before using his pace to edge past Randell enough to fire the ball diagonally past Brzozwski and into the net.

Things nearly got worse moments later, as a deep ball towards the back post left Loza well-placed to double the advantage, however Andrews again came to the rescue, sticking out a trailing leg to block the ball just short of the goalline.

Despite being down on numbers, United’s patched-up side had every right to feel frustrated as the deficit remained at the interval.

The determination to put that right was clearly evident immediately after the restart, with the men in yellow in the ascendancy in opening minutes of the second period.

Some clever play from Sheaf 20 yards from goal proved too much for a retreating defender, winning The Gulls a free-kick in the 48th minute.

Andrews, always a threat set pieces, sent in a typically precise left-footed effort that left beat Ross all ends up, with the post rescuing Woking, just when parity looked to be on the cards.

Eight minutes later, the woodwork acted in a similar fashion to deny the home side, as Gerring looked to profit from a corner, before Jonte Smith was afforded too much space inside the box moments later, however The Cards forward blazed his side-footed effort high and wide of the target.

The action never let up, and within seconds, United went within inches of levelling things up.

A swift break upfield saw Whitfield feed Waters into space centrally, however despite the situation almost replicating the latter’s goal against Solihull on Tuesday evening, he couldn’t reproduce that strike, leaving Ross to divert the ball away, with the agony continuing as Whitfield’s  follow-up was hacked away just short of the goalline.

Seven minutes later, an excellent pass from Whitfield saw Waters again force Ross into action, with his parry again falling kindly, as the ball feel towards Cardinal defenders, rather than the lurking Gulls forwards.

The watching Yellow Army could have had few complaints with their side’s performance, however their luck in and around the Woking goal showed little sign of changing as the tie entered the final fifteen minutes. 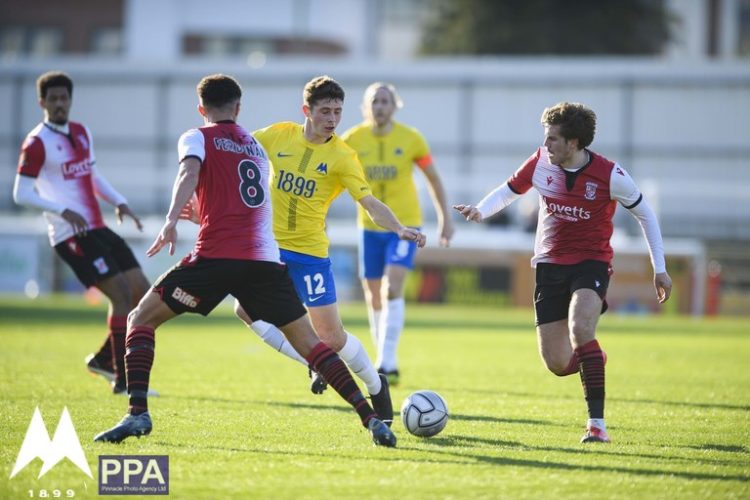 As the clock ticked towards the ninety minute mark, it became more and more a case of whether the hosts would wilt in the face of almost constant United pressure, however the harder Johnson’s men pushed for an equaliser, the more the ball seemed determined to stay out of The Cards’ net.

Max Kretzschmar, with his side’s only shot on target in the second half nearly grabbed a clinching second goal as the match headed into injury time, however Brzozowski prevented any further unjustified damage, producing an excellent save to tip the ball over the bar.

Still, there was to more late drama, as a hugely controversial decision denied The Gulls a richly-deserved equaliser in the fourth minute of stoppage time.

After winning a free-kick wide on the right wing, Andrews’ left-footed set-piece was again delivered to perfection, with the ball emerging from a packed goalmouth via Lemonheigh-Evans to end up in the back of the net, and seemingly send the match to penalty kicks.

However, to the astonishment of everybody the Torquay camp, an assistant’s flag ruled the goal out, with the subsequent inquiry regarding the decision failing to bring closure to the matter.

The final whistle may have seen dreams of Trophy glory put on hold, however the club’s priority of a Football League return remains an exciting prospect, with plenty more twists and turns in store during the final three months of 2020/21.

Next stop? Hartlepool at Plainmoor next Saturday. All aboard!