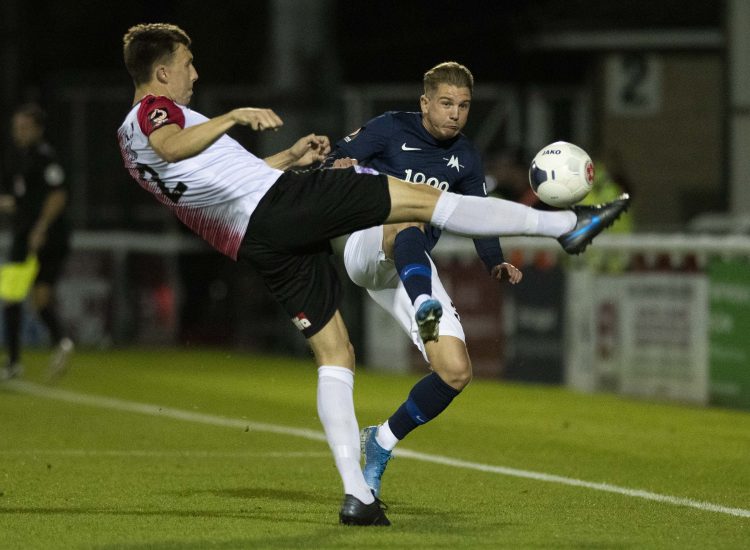 United showed admirable fighting spirit against Woking, as they came from behind to grab a point at the home of the early league leaders.

After a promising first half ended goalless, it was Woking’s Dave Tarpey who struck early in the second half. It was a lead they would hold until eleven minutes from time, when debutant winger Ben Whitfield was on hand to level the scores.

United, boosted by the signings of Whitfield and Robbie Cundy on the eve of the match, included both new additions on the bench. There was also three changes to the starting line-up, with Joe Lewis, Frank Vincent and Manny Duku replacing Jean Yves Koue-Niate, Jake Andrews and Kalvin Lumbombo-Kalala.

United started the game well and went very close on five minutes. A lovely move involving Vincent and Duku found Connor Lemonheigh-Evans in space, with the Welshman firing just wide of the target.

Although the hosts were enjoyed large spells of possession, Lucas Covolan Cavagnari remained untroubled, whilst Gary Johnson’s side were testing the Cardinal’s backline at regular intervals.

It looked like The Gulls had opened the scoring on 19 minutes, with Duku slotting past ‘keeper Craig Ross, but the flag was belatedly raised for offside. 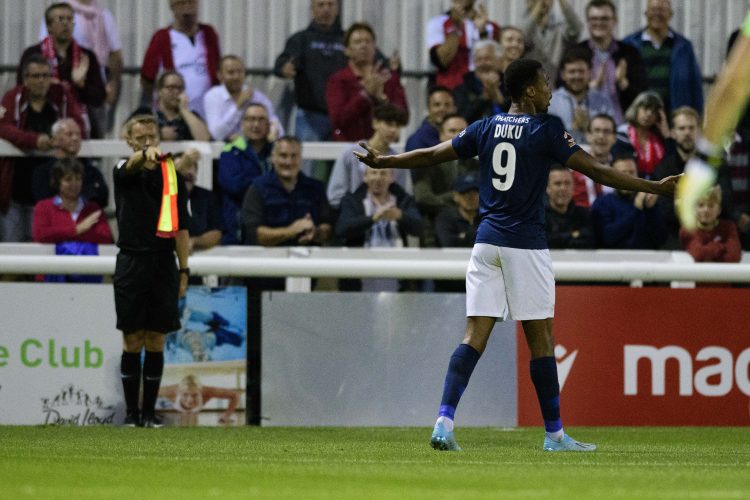 Manny Duku of Torquay United protests his innocence having had a goal disallowed due to an offside call during the Vanarama National League match between Woking and Torquay United at The Laithwaite Community Stadium, Woking, Surrey on the 3rd September 2019 | Photo: James Fearn/PPAUK.

Undaunted by the setback, United went close again eight minutes later following a Woking corner. After clearing their lines with ease, the ball found its way to Jamie Reid. Reid looked up, took aim, and saw his effort cannon off the corner of post and bar.

A warning shot from the home side was signalled on the half-hour though, as Nathan Collier headed off-target when well placed.

With Amani Little having to leave the field early with injury on 34 minutes, on went Whitfield for his debut. Five minutes later, he nearly announced his arrival by giving his new side the lead, but unfortunately his shot squirmed just wide.

At the interval, there was precious little to choose between the two sides, with Woking edging things in terms of possession but Torquay having the better of the chances. 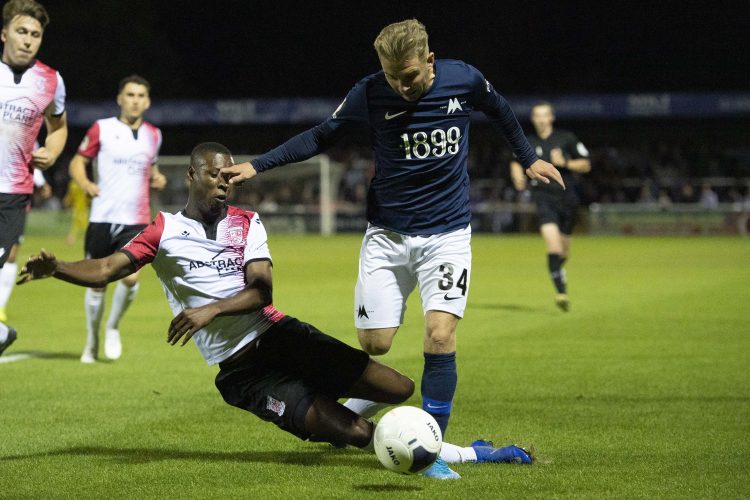 Nathan Collier of Woking commits to a diving challenge on Ben Whitfield of Torquay United during the Vanarama National League match between Woking and Torquay United at The Laithwaite Community Stadium, Woking, Surrey on the 3rd September 2019 | Photo: James Fearn/PPAUK.

United began the second half well, but after threatening to press home their advantage, Woking took the lead in the 53rd minute.

After struggling to clear a cross, Tarpey twisted and turned before finding enough space to fire home a drive to put the hosts ahead.

The goal unsettled United, who had played so well for long periods. They did though, go close again on 62 minutes, with Wynter’s ball sending Duku away. The Dutchman showed tremendous skill to stretch and get a shot in, but unfortunately the ball nestled into the side netting.

The game appeared to be drifting away from Johnson’s men, until they were boosted a goal with eleven minutes remaining.

A free-kick by Ben Wynter found its way deep into the box, where Whitfield, ignoring his status as the smallest man on the field, stooped to head United level. 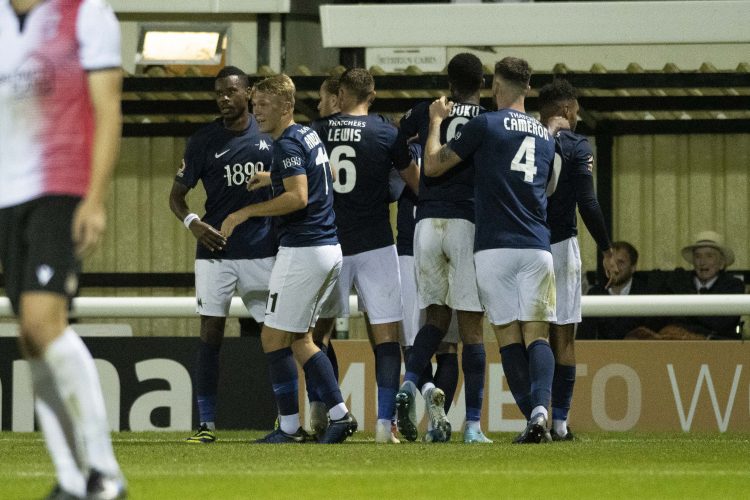 GOAL! Ben Whitfield of Torquay United celebrates with his teammates having scored to level the scoring during the Vanarama National League match between Woking and Torquay United at The Laithwaite Community Stadium, Woking, Surrey on the 3rd September 2019 | Photo: James Fearn/PPAUK.

Lifted by the goal, Torquay began to look like finding a winner themselves, with substitute Kalala stretching the home backline. Claims for a penalty in the 84th minute fell on deaf ears, but his 87th minute cross left Jake Andrews with a presentable chance, which was fired over.

As the clock ticked down, both sides traded punches in search of a winner, with Lewis playing a particularly fine role in repelling the home side.

When the final whistle did finally blow, both sides had good reason to look back on the point as one well earned.

With Harrogate Town the next visitors to Plainmoor on Saturday, it provides Johnson’s men with the perfect opportunity to build on this result and establish themselves back at the top end of the table. Tickets are available here.