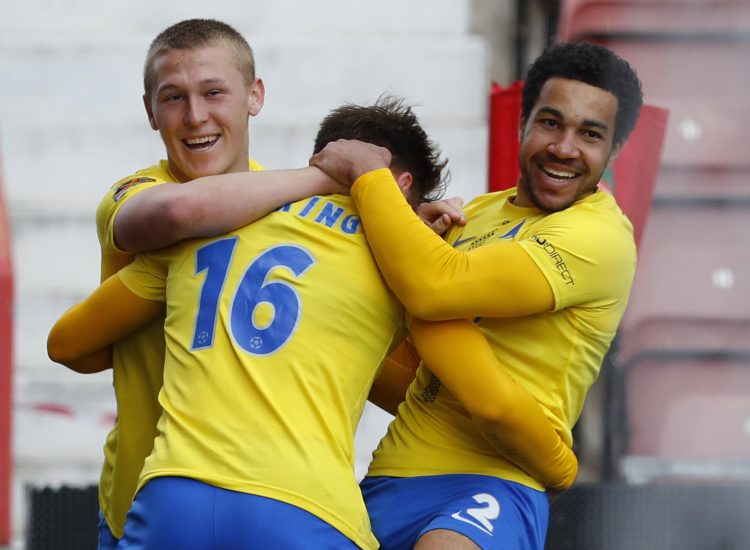 United struck late – once again – to seal a marvellous Easter for The Gulls, as Sam Sherring’s injury-time strike secured a 1-0 win away at Wrexham.

With the game heading for a stalemate, Torquay were again rewarded for their persistence as the on-loan defender scored deep into stoppage time to further reduce the gap at the top of the table.

Manager Gary Johnson made just the one change to the side that triumphed 1-0 over Woking at Plainmoor on Saturday, with matchwinner Danny Wright replacing Scott Boden, who dropped down to the bench.

It took United just 40 seconds to register their first effort at goal, as Adam Randell showed typical determination to break into the right of the box, however his shot lacked the required accuracy, as it sailed comfortably over the bar.

The men in yellow remained on top in the early stages though, and two minutes later, Asa Hall’s header from a Connor Lemonheigh-Evans corner warmed the palms of Christian Dibble in the home goal.

Birthday Armani Little was next to try his luck moments later, with a low drive that was deflected wide of the post, before the resultant corner brought more drama, as Hall looked certain to finish a near-post flick from six yards, however some dubious close attention from a defender caught The Gulls’ skipper off-balance, forcing his header to sail over the top.

It was all Torquay for the first ten minutes, with Wrexham allowed little opportunity to venture out of their own half.

The 14th minute did bring some brief respite for the Welshman, with Dior Angus edging Sherring out in a foot race, however with the Torquay defender blocking his path centrally, Angus was forced fire a low shot at Lucas Covolan from an ambitious angle.

Two minutes later, and neat interplay between Benji Kimpioka and Ben Wynter freed up Randell to send in a clipped right-wing cross towards the near post, with Joe Lewis sending another header over the crossbar.

Despite having to play second-fiddle for long periods, a set piece nearly undid Johnson’s men on 20 minutes. With Lewis somewhat unlucky to be pulled up for a foul 22 yards, all eyes were on former Gull Luke Young, however it was Jordan Davies that saw his left-footed effort cannon off the crossbar.

Perhaps gaining confidence from that opening, Dan Jarvis sent in a tempting cross towards the back-post, where Jamie Reckford was unmarked, however Covolan made himself big enough to reduce his options promptly, before palming the ball over the bar.

In what was excellent entertainment for the neutral, the action was soon back up at the other end, as the latest flag-kick by Little found Sherring with another aerial effort, although the header caused little work for Dibble, who purely reached up to claim the ball.

On the half-hour, Little’s free-kick from 30 yards flashed just wide as United regained control of proceedings, however the sight of Kimpioka having to leave the field early will have been met with much disappointment amongst the watching Yellow Army back home.

Torquay continued to force their opponents back, and after Jay Harris  was robbed in midfield eight minutes later, Hall fired in a low drive that Dibble gathered at the second attempt, before Wynter sent a hooked left-footed volley wide from inside the box during the next passage of play.

There was an element of frustration as the players headed for the dressing rooms all-square, such had been the dominance enjoyed by Johnson’s men during the first 45 minutes. 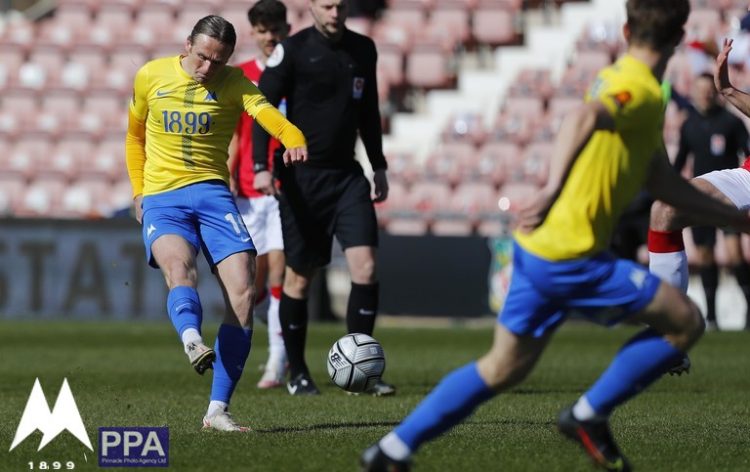 Undaunted, The Gulls initially began the second period in much the same vein, with Wynter dragging a diagonal low drive from 30 yards just wide of the far-post, three minutes in.

The departure of Lemonheigh-Evans with a knock, and a strong wind in their faces did disrupt things thereafter, although their opponents failed to make the most of those blessings, with the possession remaining in United’s favour.

With the match heading past the hour mark, Hall and Waters forced Dibble into more low saves, however both lacked the power and direction to seriously trouble him.

Although not reaching the heights of the first half, Johnson’s team looked the best bet to find a winner, however Angus’ 30 yarder on 77 minutes acted as a reminder that a moment’s hesitation could prove fatal in the quest for three points. Covolan though, reacted smartly to parry the ball away to safety.

The last ten minutes saw the hosts finally rouse themselves, with Covolan having to scramble Fiacre Kelleher’s header round the post, before the resultant corner saw Tyler French hit the outside of the opposite upright.

Johnson’s men regrouped in what looked to be readjusted mission to secure a point, however not for the first time this season, they secured all three points in the dying stages.

With the game three minutes into stoppage time, a long throw into the box caused just the chaos it intended – and with Boden’s shot blocked at source, the loose ball fell to straight to Sherring, who rifled the ball into the net via Dibble to seal a hugely valuable three points, with the final whistle sounding shortly after. 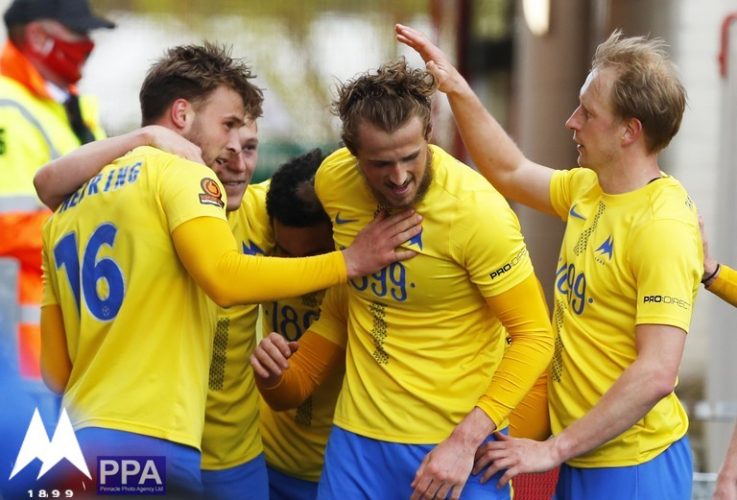 A first win at Wrexham in 33 years couldn’t have been better timed, as The Gulls continue to strengthen their promotion credentials. Plenty of work to be done yet, however for now the Yellow Army can savour a very satisfactory Easter weekend.