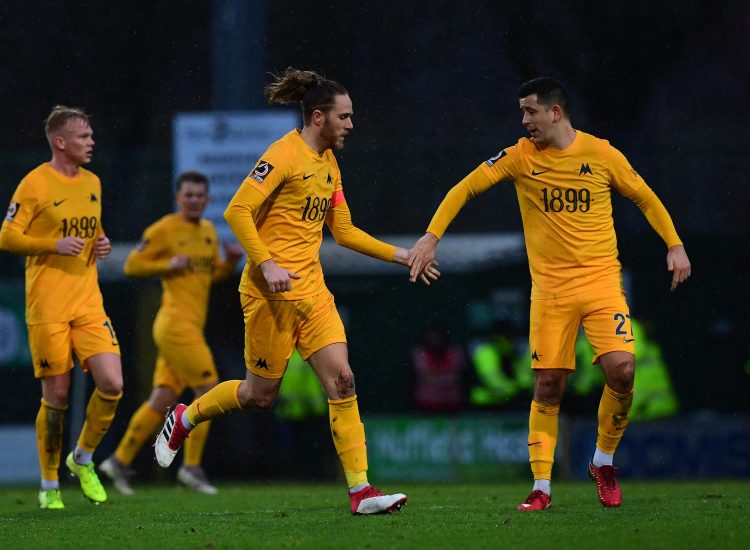 There was no festive cheer for United as they lost the Westcountry derby against Somerset rivals Yeovil Town at Huish Park on Boxing Day.

After falling three goals behind early on thanks to strikes from Myles Hippolyte, Albi Skendi and Courtney Duffus, captain Asa Hall celebrated his return to the side by replying for United. Unfortunately, there was to be no comeback in the second-half that followed, as further goals from Duffus (2) and Chris Dagnall consigned Torquay to a heavy defeat, with Ben Whitfield’s strike injury-time purely a consolation.

Manager Gary Johnson made four changes from the side that went down 3-0 to Chesterfield last time out, with Hall, Jake Andrews, Robbie Cundy and Jared Lewington taking the places of Jean-Yves Koue Niate, Joe Lewis, Aaron Nemane and Saikou Janneh.

United faced an uphill task from almost the first whistle, and were three goals down inside fifteen minutes.

A debatable handball decision went Yeovil’s way in the 4th minute, and despite United protests of a foul in the resultant passage of play, the officials waved play on, with Hippolyte providing the ultimate punishment with a fierce shot to give the home side the lead.

It went from bad to worse two minutes later, as The Glovers made it 2-0 from a corner. This time it was Skendi who beat MacDonald to the ball to double the advantage.

Only eight minutes later it was three, as a dangerous ball across the box saw Duffus head in at the far post.

United were stunned, and took some time to recover their composure after a nightmare first 20 minutes.

There was some some respite for Johnson’s men though on the half-hour, as a left wing free-kick caught Yeovil ‘keeper Nelson out, leaving Hall to score, and drag his side back into contention.

That goal failed to rouse United though, as Town went back on the offensive, with a succession of corners stretching The Gulls to breaking point.

Twice before the interval Yeovil came within inches of making it four, with Hall clearing off the line, before Rhys Murphy saw his shot strike the post, with the ball rolling across the goalline.

A rasping shot from Whitfield gave Nelson something to think about just before the interval, however there couldn’t have been too many complaints regarding the scoreline at the break, in a half where United had played second-fiddle for long periods.

Johnson rang the changes once again at the interval, with the introduction of Kalvin Lumbombo-Kalala and Nemane, in the place of Matt Buse and Andrews.

The opening stages of the second period saw United enjoy a decent spell of possession, without really troubling the home defence.

With Torquay failing to threaten, Yeovil had the confidence to play their way back into the game and in the 61st minute, Town made the points safe.

After United failed to clear their lines, Skendi fed Duffus who took the opportunity laid into his path by planting the ball past MacDonald to make it 4-1.

In the 73rd minute it was 5-1, as substitute Dagnall picked up on a loose pass in the United midfield to finish calmly past The Gulls’ goalkeeper.

The final Yeovil goal came three minutes from time, as a fine run from Dagnall occupied the Torquay backline enough to allow Duffus to put the finishing touch on a disappointing afternoon for those in yellow.

Whitfield, who produced another energetic performance, did at least have a goal to show for his efforts, as he finished off a Wynter pass in injury time to make it 6-2.

A special mention must go to the travelling United contingent, who supported their side with typical passion, despite the atrocious conditions.