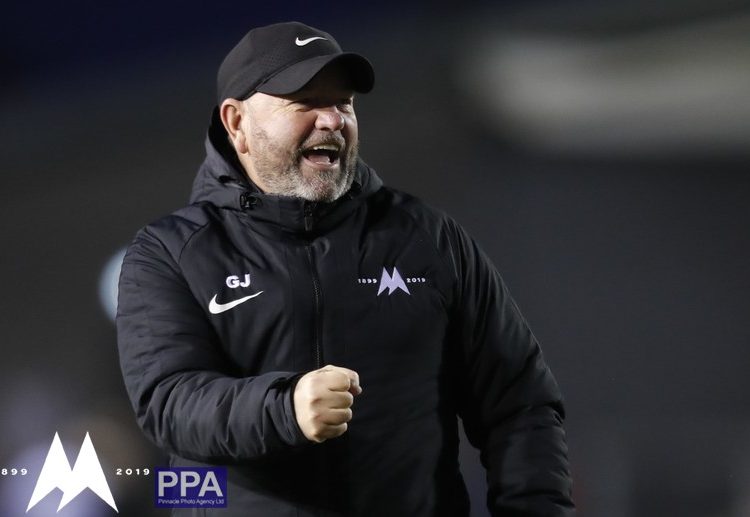 Dave Thomas of the Torbay Weekly rounds up all the latest news from Plainmoor.

Johnson, who is strongly in favour of the long-held idea, also believes that talks are going on behind the scenes which might make it happen.

The uncertainty produced by the Coronavirus crisis has left the Vanarama National League in ‘limbo’ far more than any other level of English football.

With all but two of its 24 clubs ‘full-time’, it is ‘caught’ between the many amateur or part-time leagues below it and the fully-professional EFL.

Yet it receives little or none of the lucrative financial benefits which make EFL membership so much more important.

One bonus of the current shutdown, says Johnson, is that all parties are talking about a wide range of issues as never before.

“A lot of people are getting their views across, and everybody wants to know what everybody thinks – that’s a good thing,” said Johnson, who is not in favour of the latest proposals to cut off the 2019-2020 now.

“I know George (United’s chief executive officer George Edwards) is in direct and regular contact with the National League, I am in contact with the LMA (League Managers’ Association), and I know they and many other people and leagues are talking all the time.

“One hundred per cent, the National League has got to be aligned with the EFL,” he stressed.

“It’s a professional league now, even more so than it used to be, and we and the EFL have got to have the same rules.

“This is a great opportunity to align the NL with the Football League, and we believe that conversation is happening.”

There is growing pressure from lower leagues and clubs to end the current season now, and the NL have opened talks with the FA over ways in which it could be done.

But Johnson still wants the 2019-2020 campaign to be finished if possible, but NOT behind-closed-doors.

“It’s a job for everyone to work out what’s best. And, let’s face it, it all depends on the virus and how long it lasts.

“But let’s say you cancel the season now and then, in mid-May, they’re able to start again, we would be gutted.

“I don’t think the season should be finished just for the sake of it, and it must be safe for players and
supporters.

“We can’t play behind closed-doors – that doesn’t work for anyone. They tried it in Australia recently, and then stopped it.

“I know the prize of winning promotion, without a doubt.

“But I also know that Liverpool, or Barrow in our division, won’t want to win those leagues without finishing the job.

“There are big problems to overcome. We’ve got to find a fair outcome, and the only way you do that is to get everyone’s views, not just a few people sat round a table.”

United on the Phone

IF OLDER Torquay United fans get a call which starts “Hello, it’s Gary Johnson here”, they shouldn’t hang up!

Johnson, his assistant manager Aaron Downes and captain Asa Hall are all ringing Gulls ‘Senior Citizen’ season-ticket holders for a friendly chat during the Coronavirus ‘lockdown’.

“It’s been absolutely terrific and a real eye-opener,” said Johnson.

“It’s also picked me up as much as I’ve tried to pick people up, and I know Aaron and Asa have felt the same.”

Johnson revealed: “I have had a couple of calls where I’ve started ‘Hello, it’s Gary Johnson’ and they’ve replied ‘Gary who?’

“I can understand people being wary of nuisance calls, but when they’ve realised that it really is me, they have been very appreciative that we’ve called. ”

Around a hundred supporters have already been contacted, and Johnson explained: “First and foremost, we’ve been finding out whether people are OK.

“Most people have family or friends looking out for them, but quite a lot of older fans are on their own.

“They have been so happy to talk about something they obviously love.

“It’s good to put the phone down after 20 minutes – I’ve been on for more than half-an-hour sometimes! – having made them feel happier and more comfortable.

“The chat obviously gets round to football pretty soon. People want to tell you what they think and exactly how they see things, and that’s fine.

“Torquay United fans of whatever age are very educated in a football sense. They know what’s good and what isn’t.

“I’ve been able to answer their questions, I hope, and it’s only a shame that we’re never going to get round to everyone.

“But at this particular moment, everyone should have time for others.”

United are using a database of contact details built up through ticket sales over the past couple of seasons.

This week Johnson is also holding the first of several planned ‘Question-and-Answer’ sessions via United’s website.

“There must be thousands of other Torquay United fans out there who might want to ask me any question they like,” he said.

“I don’t want to leave anything out, within reason. I’ve just done my first load of questions, and I’ll be doing more as we go along.”

For the latest information on the virus, please visit https://www.nhs.uk/conditions/coronavirus-covid-19/

To sign up for our newsletter, please visit www.torbayweekly.co.uk