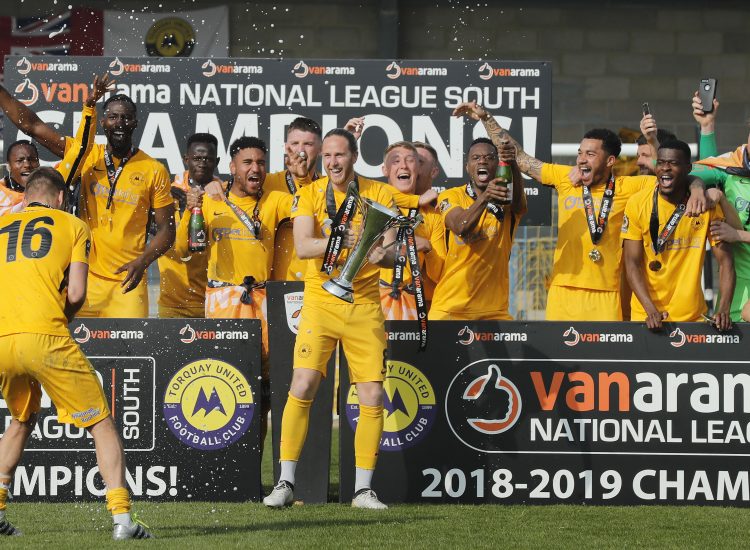 Every Gulls fan present at Plainmoor on April 22nd 2019 will have their own favourite memories of a day that encapsulated a season of triumph.

For pure historic appeal though, few can better the moment that Asa Hall hoisted the National League South trophy aloft to declare United as champions, becoming the first Torquay skipper in 92 years to do so.

Dudley-born Hall began his senior career in the mid 2000s with Birmingham City, as the Blues enjoyed a spell in the heady heights of the Premier League.

Singled out as one of the brightest prospects during his youth, those predictions were well-placed, as the tall midfielder combined International recognition with England U19s and U20s alongside successful loan spells at the likes of Boston United and Shrewsbury Town.

It was on 7th January 2006 that Asa made his introduction into senior football, with an early substitute appearance paving the way for Boston’s 3-1 victory at home to Macclesfield Town. Such was his positive impact on proceedings, that Hall was soon installed into the starting line-up, and by the end of the season had featured in twelve of The Pilgrims’ fixtures.

Successive contract extensions at St Andrews were aided by further match experience gained on loan, firstly at Isthmian League Ashford, before a return to Football League surroundings with Shrewsbury.

His impact with Shrews couldn’t have been more immediate. Four minutes into his debut, Hall struck the opening goal with a trademark header to set the side on their way to a 2-0 victory over Morecambe.

After making a notable contribution towards ensuring Town’s League survival, the close-season represented something of a crossroads for the player.

Now 21, and having proved his worth at Football League level, Asa turned down the advances of his previous clubs to begin a new chapter in his career at Luton Town FC.

Despite The Hatters enduring a traumatic 2008/09, battling in vain to retain their Football League status following a huge point deduction, the season was a landmark one for Hall. 11 goals in 51 appearances, as well as a Football League Trophy winners medal following a 3-2 extra-time win over Scunthorpe, were some consolation for the season in non-league football that was to follow.

With Luton unable to live up to their tag as promotion favourites during the subsequent campaign, May 2010 saw Asa leave Kenilworth Road, heralding a return to league football for both Asa and new club Oxford United.

Two more seasons of success ensued, culminating in The Us narrowly missing out on the Play-Offs, before Hall opted for a return to New Meadow, with Shrewsbury now offering their former loanee third tier football.

A loan spell at Aldershot Town and temporary return to Oxford followed, before Asa made a permanent move to Cheltenham Town in May 2014.

An unfortunate injury in the opening game of the season meant he saw no action for the rest of the season, and his presence was hugely missed, as Town were relegated out of the EFL for the first time.

Hall made up for lost time upon his return though, as he linked up with current Gulls boss Gary Johnson and his Plainmoor assistant, Aaron Downes, for the first time. It was to prove a winning combination from the outset, as the Whaddon Road club bounced back at the first attempt.

After earning a deserved return to League football, history repeated itself later that season, as the disappointment of relegation during a loan spell with National League side York was tempered by glory at Wembley, as he helped steer the side to a 3-2 FA Trophy win over Macclesfield Town three weeks later.

Following his departure from Cheltenham, Barrow AFC was the next destination for Hall, with his spell at Holker Street seeing him employed in both midfield and defensive roles. That versatility, along with his obvious leadership qualities, played a large part in The Bluebirds successfully retaining their place in non-league’s top flight, before a move to the English Riviera beckoned in the summer of 2018.

Despite quickly establishing himself as the focal point of the Gulls’ midfield in unfamiliar National League South surroundings, it wasn’t until Johnson’s arrival as United manager in September, that his industry in the engine room was met with consistent results for the team.

The renewed partnership began to pay dividends at the earliest opportunity, with Asa notching in the 2-0 win at Hungerford to begin a new era in perfect fashion.

With the season edging towards an exciting climax, the Torquay skipper’s calming influence proved invaluable to his young teammates, as a two-way battle for title supermacy eventually saw United pull clear of Woking in the closing weeks.

A first league title in over 90 years provided the Yellow Army with much to cheer following a barren spell, and ensured that the club’s ultimate ambition of regaining their EFL status remained on course.

With Hall and his team’s aspirations now intertwined, under the guidance of Johnson, United couldn’t wish for a better captain to lead them there.

Thank you to all our sponsors, including Asa’s Player Sponsor: