“We Came Out Raring To Go,” – Ben Whitfield On Aldershot Win & The Season So Far 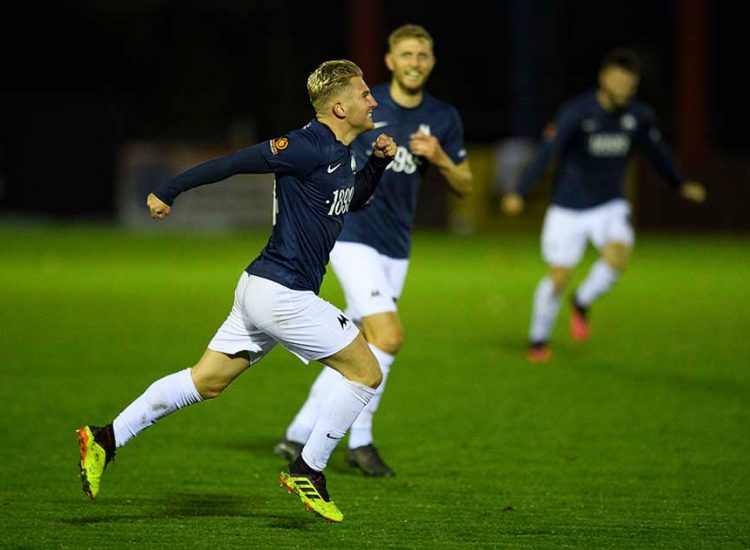 “We Came Out Raring To Go,” – Ben Whitfield On Aldershot Win & The Season So Far

“I think it’s been a really good start, one I think that we’ve deserved,” said United midfielder Ben Whitfield, recovering after Tuesday night’s 4-1 win over Aldershot where he scored a fine shot from distance. The result sent United to the top of the National League table.

After going behind in the 8th minute of the match, United came back to win handsomely. Ben Wynter’s ball into the box was enough to beat Aldershot ‘keeper Mitch Walker. Danny Wright struck soon after the second half resumed before Whitfield scored a goal of the season contender in the 51st minute. United took the game away from the Shots quickly after the break. Wright wrapped the points up just before the final whistle, following up after his first shot had struck the post.

“We weren’t ‘at it’ in the first half and it took a few words in the dressing room, but they were muchly deserved,” said Ben.  “We all knew, and the Gaffer knew, that the first half wasn’t acceptable. We changed a few things and you could see right from the word go in the second half it made a huge difference – we came out raring to go.”

Ben talked us through his goal which was a beauty from 25 yards out.

“We broke quickly. I knew Aaron had made a different run to what I was going to make so I ran across Connor. I didn’t think he was going to pass to me, I thought he was going to shoot! His ball landed behind me so I’ve had to sort my feet out. I looked up to see whether anything else was on but the only option was to shoot. Thankfully it bent into the top corner.”

Whitfield feels at home at Plainmoor, a little over a year since Gary Johnson brought him to TUFC. He also revealed that this season’s pre-season campaign was his first proper preparation for a season of professional football.

“It has really benefited me having played the majority of last season under the Gaffer. I know the way he works and what he wants from me as a player. He talks to me quite a lot and he’s very good at man management.

Team spirit always plays an important part in successful teams, and United’s current crop are no different according to Ben.

“The group of lads that we’ve got and the team spirit is definitely a representation of where we are in the league and where we deserve to be at this moment in time.”

Although a young squad, United have enough experience and maturity to know that the season is going to be a tough challenge if they are to find themselves among the promotion pack.

“We’ve got to take every game as it comes now, we can’t get ahead of ourselves because it’s a long season. We’ve played six games and the Gaffer keeps pushing us every day which is what we need. If we keep doing what we’re doing on the football pitch then, I don’t see why we can’t stay up on the right side of the table and push for promotion.”

Whitfield thinks United have what it takes to adapt to the ups and downs that the season will throw up.

“I think having a few formations under our belts that we can all play – it gives the Gaffer options. The opposition don’t know how we’re going to play because we have many different ways of playing.”

United may have a long trip ahead of them to take on Hartlepool on Saturday, but Ben has plenty of faith that United can be competitive against a team currently in fourth place.

“Hartlepool is a long trip and they haven’t lost yet this season. We know we’re in for a tough test but it’s about us and if we play our game then we’re good enough to beat anyone in the league.”