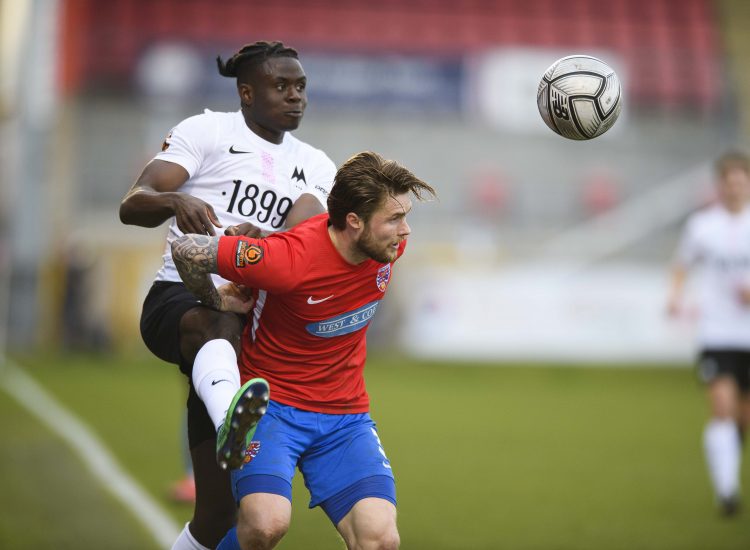 Dagenham came out on top in on Saturday, as United went down to a single-goal defeat in east London.

A late strike from Angelo Balanta proved decisive, as Torquay suffered defeat on the road, despite dominating the second half for long periods.

After back-to-back home wins, it was perhaps no surprise that boss Gary Johnson named the same starting XI for the third successive game, although there were two new additions on the bench, where Dean Moxey returned from his recent injury lay-off to take his place alongside new loan signing from Sunderland, Benji Kimpioka.

Despite winning a corner inside the first 30 seconds of the game, Torquay were soon dragged into a scrappy opening start to proceedings, during which time neither side were able to keep hold of the ball for any significant period.

The first opening fell the way of United on 11 minutes. With Daggers defenders appealing for offside against Scott Boden, the striker ignored those protests to feed the ball back to Armani Little, who in turn played in Connor Lemonheigh-Evans on the left edge of the penalty area. For a moment, the Gulls man looked well placed to open the scoring, however home ‘keeper Ellot Justham intervened quickly to narrow the angle and keep parity intact.

Five minutes later, and an enterprising break down the right from Myles Weston ended with his cross into the box being met by Matt Robinson at the near post, however it was with some relief that Lucas Covolan saw the Dagenham man clip his shot wide of the upright.

The stop-start nature of the match continued, before Will Wright tried his luck at Torquay’s goal twice in quick succession midway through the half. His initial attempt, a curling effort from 20 yards, was far too high to cause any real discomfort for Covolan, however his second – via a 22-yard central free-kick – was much closer, until it also dipped off-target.

Although Johnson’s men were arguably looking the more cultured in attack, it was the hosts who gained something of territorial advantage as the half wore on, as Weston’s 40-yard strike on 35 minutes brought up the match’s first shot on target – again though, it lacked both the power and direction to trouble the scoreboard operators.

A couple of tricky runs from home winger Angelo Balanta kept Ben Wynter busy up until the break, however with the match still scoreless at the change of ends, everything was still very much up for grabs ahead of the the second 45 minutes.

There were promising signs – for the neutral at least – of a more open second period, with the opening minutes seeing Balanta sending a looping header over the bar for the hosts, before Torquay responded as Jake Andrews floated in a typically dangerous free-kick at the other end, with Boden just unable to get enough purchase on it at the back post. Goalkeeper Justham was visibly relived to gather the loose ball, as several Gulls lurked with intent in a packed 18-yard box.

United were visibly upping the ante, and in the 55th minute, an excellent piece of close control down the left from Lemonheigh-Evans saw him drive into the box before setting up Ryan Law for a sight at goal. With defenders closing the Plymouth Argyle loanee down, he was forced to react quickly though, and his shot was far too high to test Justham.

The introduction of a new-look strikeforce nearly paid almost instant dividends on 67 minutes, with Kimpioka jinking across the 18-yard line before feeding the ball out wide to Adam Randell, who sent in a perfect cross onto the head of fellow sub Josh Umerah, forcing Justham into producing a marvellous one handed save from point-blank range to keep out the ball from crossing the line.

Torquay were now beginning to look much more dangerous in attack, with The Daggers now forced to hit their opponents on the break. Kimpioka’s pace and power was causing the home backline to retreat at regular intervals, and on 73 minutes he nearly broke the deadlock himself, with a low drive heading for the bottom corner, with Justham continuing to earn his money, as he duly got down smartly to gather it.

There was increasing urgency from Johnson’s men with the game entering the final quarter of an hour, however in their quest for three points, they were hit by a real sucker-punch, as Balanta made the most of Wynter losing possession to rifle home a 79th minute shot past Covolan to make it 1-0.

Balanta nearly doubled that scarcely-deserved lead six minutes later after breaking into the left-hand side of the box, however this time Covolan was able to get down and divert the ball round the post.

A goal to the good gave Dagenham the perfect platform on which to protect it thereafter, however there was still time for Kimpioka to come within inches of equalising with virtually the last kick of the game, as Moxey’s long throw caused panic inside the box, with the Sunderland loan man seeing his driven effort from ten yards shaving the far post before going behind.

The final whistle may have signalled a measure of frustration in the Gulls’ ranks, especially after an afternoon that promised so much more on occasions, however they will have little time to feel sorry for themselves, with the arrival of old foes Woking to Plainmoor on Good Friday presenting Johnson’s side with an ideal opportunity to get back to winning ways.