United produced another masterclass in front of goal to secure all three points at FC Halifax Town on Saturday.

Captain Kyle Cameron gave his side into the lead early on, before Jamie Reid’s penalty put The Gulls firmly in a charge at the break. A second from Reid saw United flying, and despite Liam McAlinden and Michael Duckworth notching either side of Kalvin Lumbombo-Kalala’s late effort, Torquay secured the victory to see them further reduce the gap at the top of the table.

Manager Gary Johnson made two changes to the starting line-up which secured the 1-0 home win over Wrexham on Tuesday, with Lucas Covolan coming in for Shaun MacDonald in goal, and Saikou Janneh making his first start since returning to Plainmoor, at the expense of Kalala.

The first chance of the game fell the way of the home side on four minutes. A corner was partially cleared by the Gulls defence, however the ball fell kindly for Liam McAlinden, who took aim but sent his effort over the bar.

United responded with an excellent spell of the possession, with Vincent’s run down the left winning Torquay a corner on eight minutes.

From the resulting flag-kick, Jake Andrews sent a pin-point delivery onto the head of Cameron, who directed the ball past the ‘keeper, and into the net. 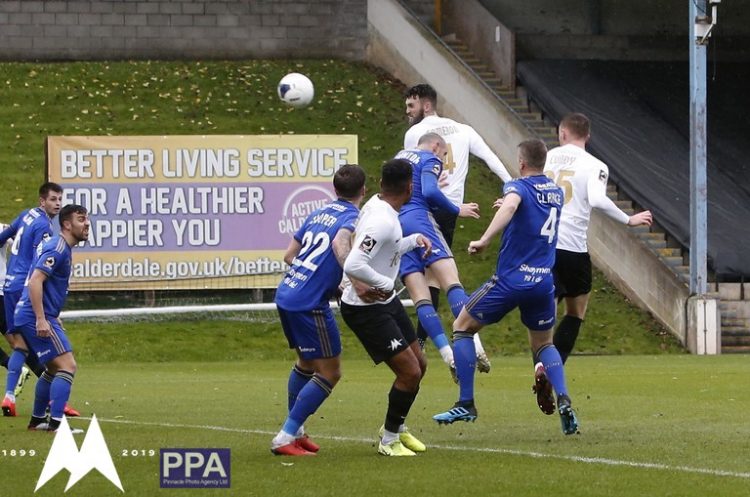 With the deadlock broken, the action once again switched to the other end, with a couple of Halifax corners ending with Charlie Cooper forcing Covolan into a fine stop.

There initially looked little danger on 17 minutes, with Vincent considering his options with his back to goal inside the box. Jacob Hanson’s untidy challenge failed to claim the ball however, and left the referee with no option but to point to the spot.

Reid responded by slamming the ball into the net with ease to double his side’s advantage.

It nearly got even better on the half-hour mark, with some trademark interplay between Reid and Janneh leaving the latter in space, but this time the effort was steered wide of the post.

It was Janneh who tested the ‘keeper again nine minutes later, with some lovely trickery giving him the space to find a shot, but the effort was too close to Sam Johnson in the Town goal.

Further efforts from Andrews and Davis failed to add to United’s joy at the break, but as the players headed for the dressing rooms, the travelling Yellow Army would have been delighted with the first-half showing from their side.

Two goals down, Halifax had to respond during the second period, and they duly applied the pressure during the early stages following the restart.

A succession of corners saw United’s backline having to work in unison to repel the danger, with The Gulls struggling to reproduce the slick passing moves that became their hallmark during the first 45.

In the 56th minute, the ball was lost in the Torquay midfield, leaving Liam McAlinden to feed Tobi Sho-Silva in space on the edge of the box. Thankfully though, his effort went high over the bar.

As Johnson’s men began to work their way back into the match, both sides traded chances to amend the scoreline.

In the 61st minute, Reid beat Josh Staunton on the edge of the box before firing the ball across the face of goal, with Janneh just unable to connect.

Seconds later, McAlinden delivered a fine ball into the box, but Sho-Silva failed to read the script and sent his effort off-target.

They soon were made to pay as United broke with ruthless efficiency.

In the 64th minute, the time-honoured tradition of Janneh feeding Reid saw United’s leading scorer slam home him from close range to register his second, and his side’s third. 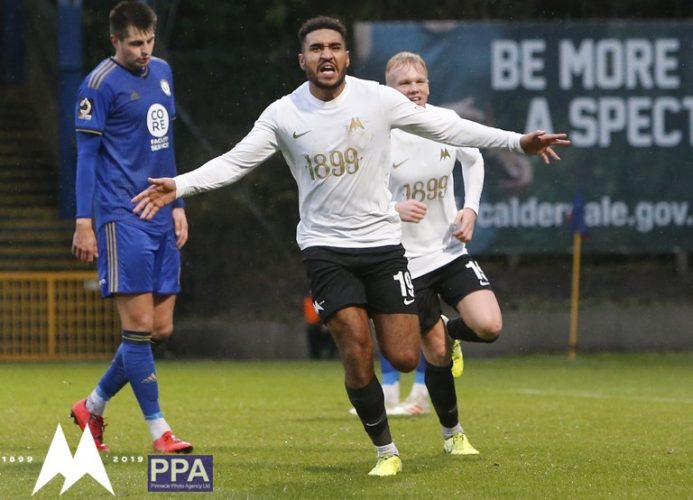 Just when the points seemed to be under lock and key, the home side finally made their mark in front of goal.

With ten minutes remaining, McAlinden, who had looked dangerous all afternoon as Town’s main provider, took matters into his own hands by finishing confidently to throw his side a lifeline.

For a spell thereafter, Johnson’s men faced a largely rearguard action. They emerged from it unscathed though, and with the game moving into injury-time, they struck once more.

Reid turned provider by feeding Kalala in space. The Frenchman’s typical trickery saw him nullify the threat of the Halifax backline, before he stroked the ball home to seal the points.

Duckworth did pull another back for Town, with an opportunist effort in a crowded goalmouth in the fourth of five added minutes, but it was to be United’s day, as Johnson’s side continued their march up the National League table.

Up to fifth and just two points off top, United now face a break in league action, as cup duties taking centre stage this week. Tuesday sees a visit to Elmore in the St Lukes Challenge Cup, before The Gulls head to Maidstone on Saturday in the Emirates FA Cup.