There was disappointment at Victory Park on Saturday as United slipped to defeat against a committed Chorley side.

Marcus Carver gave the home side the lead on 24 minutes to give his side all three points, with United keeper Shaun MacDonald producing a marvellous second-half penalty save to keep his side in contention.

Manager Gary Johnson made three changes to the side that went down 2-1 at home to Sutton last weekend, with MacDonald replacing Lucas Covolan between the sticks, and Joe Lewis and Jake Andrews returning from international duty and injury respectively. Frank Vincent and Jamie Reid both missed out after failing to recover from knocks sustained last time out.

The game took some time to get going, with no chances of note arising within the opening stages.

The unsegregated ground had to wait until the 21st minute for the first opportunity of the game, and when it did arrive, it fell the way of The Gulls.

An attacking free-kick was sent into the Chorley box with typical precision from the returning Andrews, however Kyle Cameron couldn’t quite manoeuvre himself in time to head home. Fellow defender Robbie Cundy followed up by sending the loose ball over the bar.

Then, in the 24th minute, the home side took the lead. Challoner fed Ross, who sent an inviting ball into the box, which Carver headed into the back of the net.

Appeals for a United penalty at the other end were waved away soon after, as Johnson’s men looked to submit an immediate response.

The home side were doing a good job at stifling the United attack though, whilst creating a couple of decent openings themselves.

In the 38th minute, Nortei Nortey took aim and fired a low shot just wide of the post from distance.

Just before the interval, Torquay created a couple of chances for themselves as they attempted to restore parity.

In the 40th minute, Kalala fed Whitfield into shooting range, however his effort was straight at Matt Urwin, with Janneh handily placed.

Two minutes later, a free-kick on the edge of the box presented Andrews with a sight of goal, with The Gulls’ midfielder responding by forcing Urwin to parry the wall away to safety.

As the half drew to a close, United had managed to claw their way back into the match, however they still had plenty of work to do to divert the course of the points.

Whilst the first-half took some time to get going, the second began at quite a pace.

First, a nice spell of possession from United saw Whitfield again presented with a chance to level things up, but after the initial shot was blocked by the ‘keeper, Blakeman was on hand to hack the ball away.

Then in the 52nd minute Chorley were awarded a penalty after Matt Buse felled Charles Vernam in the box.

With only MacDonald standing between Chorley and a two-goal lead, Torquay’s recalled ‘keeper responded with an excellent full-length save to keep the deficit at a single goal. 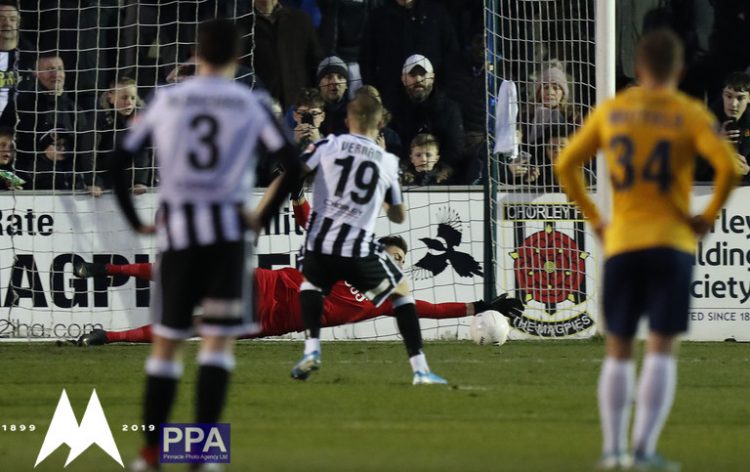 Following the introduction of Ruairi Keating and Manny Duku, the former showed his intent by instantly winning a corner.

From the resultant flag-kick in the 62nd minute, Andrews floated a delightful ball into the box, with Buse firing in a shot that was blocked at point-blank range.

With the Irishman visibly lifting United’s attack down the right, Keating sent in an excellent cross in the 66th minute. Just missing the head of Buse, the ball fell once again to Whitfield, who steered his latest effort wide of the upright.

As the game wore on, it soon became apparent that the hosts were satisfying themselves with soaking up the pressure and attempting to hit United on the counter.

The home side were still looking dangerous though and came close to putting the game beyond United with nine minutes remaining as Nortey sent a low drive towards the bottom corner, with MacDonald again doing well to divert the ball behind.

Chorley defended deeper and deeper and the game neared the finale, but United struggled to find a way through a determined opposition backline.

Twice in stoppage time though, United nearly saved themselves.

First, Whitfield’s excellent cross found Duku in space at close range, but off-balance, the Dutchman could only send his effort into the ‘keeper’s palms. Then moments later, a long ball forward saw the same men contest an aerial duel, with Duku’s header forcing Urwin to spread himself to keep his side in front.

Seconds later the final whistle blew, with the disappointment palpable amongst the men in yellow.

United have an almost instant opportunity to put this result right though, with a visit to Eastleigh just three days away.