United announced their return to the National League with all three points against Boreham Wood at Plainmoor on Saturday.

After a cautious first-half, two goals within two second-half minutes from Opi Edwards and Jamie Reid sealed the win for Gary Johnson’s men, with Tyrone Marsh’s late effort for the visitors a mere consolation.

The Gulls nearly got off to the dream start on 11 seconds, with Reid latching onto a ball just outside the box, before firing a low effort just wide.

Although Manny Duku nearly got on the end of a flick a few minutes later, United were finding it difficult to break down a physical Wood side, with visiting striker Kabongo Tshimanga a constant threat to United’s backline.

The key event of the first half came on the half-hour. Duku, who had already received some rough treatment at the hands of the visitors, was about to set off towards goal when Jamal Fyfield flew in with a lunging challenge that gave the referee little choice but to produce the red card. 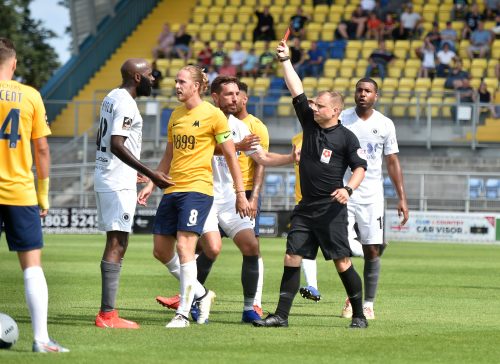 Jamal Fyfield of Boreham Wood in hard on Manny Duku of Torquay United which gets him a straight RED CARD from referee Adrian Quelch, during the Vanarama National League match between Torquay United and Boreham Wood at Plainmoor, Torquay, Devon on August 3 – PHOTO: Sean Hernon/PPAUK

United upped the ante following the interval, and forced David Gregory into his first save on 51 minutes. Some neat work from Reid threaded in Duku inside the box, but the Dutchman’s effort was palmed away by the ‘keeper.

Johnson took action in the 56th minute, by introducing Bristol City loan duo Edwards and Connor Lemonheigh-Evans, much to the delight of the 3,000 United fans. The impact was almost immediate.

Some neat play down the right saw Wynter with time and space to fire in a drive, with his effort striking the woodwork and away.

The breakthrough came soon after.

On 61 minutes, Lemonheigh-Evans threaded a delightful ball into the path of Reid, with United’s frontman showing remarkable composure to find Edwards at the back post, where he fired home from point-blank range to give United the lead. 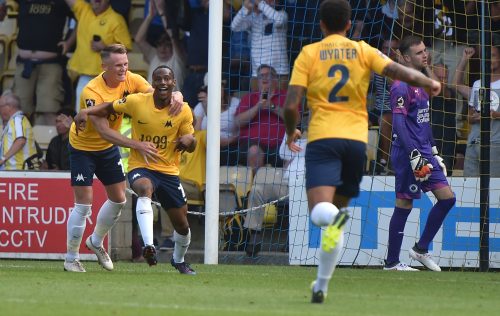 Two minutes later and the lead was doubled. Buoyed by the goal and with volumes rising from the terraces, Reid drove towards goal, and with the Boreham backline retreating, took aim and sent a thunderous effort into the net to make it 2-0. 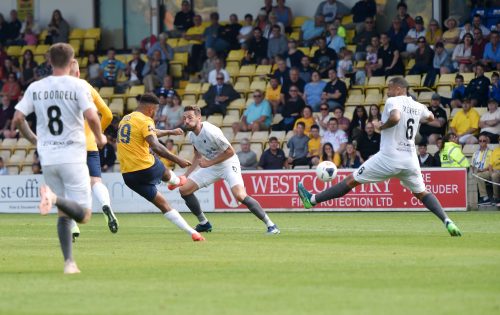 Now in complete charge, Torquay were threatening a third at regular intervals until the visitors halved the deficit in the 90th minute.

Some fine close control from Justin Shaibu saw the ball find Tyrone Marsh, and the ex-Gull slotted home in off the post to set up a nervous finale.

Six minutes of injury time would not deny Johnson’s men though, as they head to Solihull Moors on Tuesday night with three points already on the board.

Thanks for the support Yellow Army – We’re on our way!

Tickets for our away match at Solihull Moors on Tuesday, 6th August are available here.