United blew Stockport County away during a four-goal onslaught during the opening period at Edgeley Park on Saturday.

A first-half brace from Jamie Reid, along with two own goals from Festus Arthur and Jordan Keane, gave The Gulls a scarcely believable four-goal advantage at the interval, with the damage too much for the home side to repair during the second half that followed.

Manager Gary Johnson made one change to the side that went down 3-2 at home to Eastleigh on Tuesday, with Kalvin Lumbombo-Kalala recalled at the expense of Ruairi Keating.

With both sides on lean runs in recent times, it was perhaps not surprising that the game took some time to get going, with neither side creating much in the way of scoring chances in the early stages.

Out of nowhere, United were given a golden opportunity to open the scoring in the 19th minute, as the referee wasted little time in penalising Paul Turnball’s shirt-tug on Robbie Cundy inside the box.

Reid needed no further invitation, and duly fired Johnson’s side ahead from the spot. 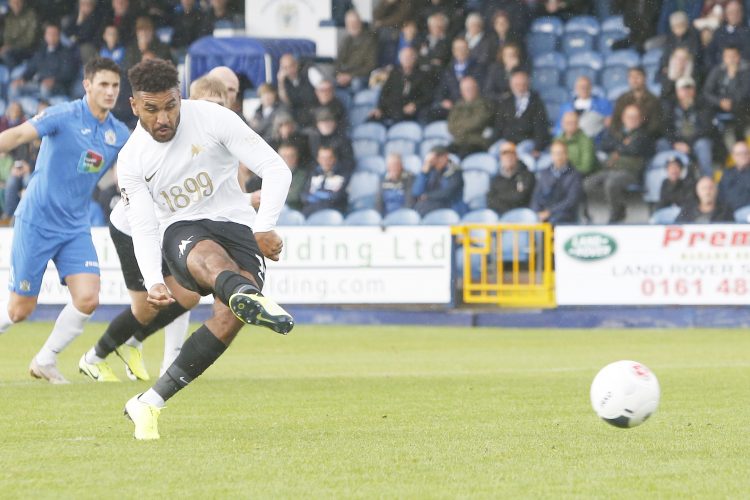 Seven minutes later, the first real chance in open play saw The Gulls double their advantage. Neat interplay in midfield from Ben Whitfield and Lumbombo-Kalala saw the two link up to fire in a low cross, which the retreating Arthur could only to steer into his own net.

With the focus on keeping things tight, Torquay were doing well to limit the hosts to minimal chances, however just before the break, they pulled clear.

Lumbombo-Kalala and Whitfield, who had linked up so well during the first half, interchanged passes before the latter sent in a teasing cross that County defender Jordan Keane could only steer into his own net in the 42nd minute.

If that wasn’t good enough, in the last minute of the half, Reid picked up the ball from deep, and with Stockport waiting for the pass to Whitfield alongside, United’s leading marksman looked up and fired into the net to give The Yellow Army a half-time interval to remember. 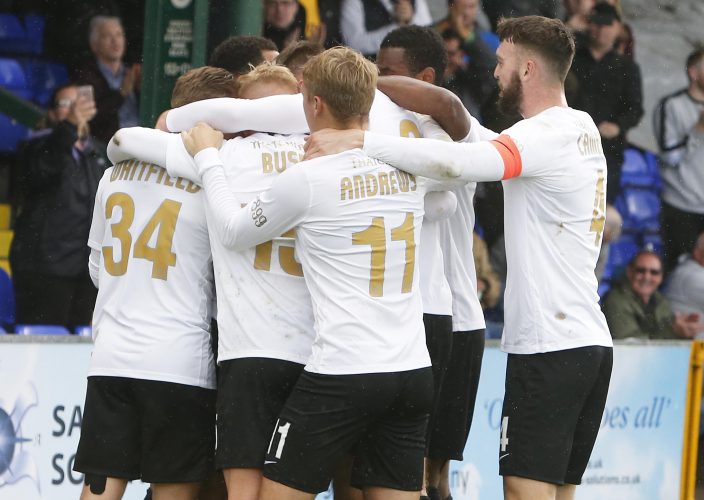 The home support will have demanded better from their side in the second period, and an early shot into the side netting from substitute Ben Jackson reminded the Gulls’ backline that there was still work to be done.

Although Turnball and Adam Hammill’s 53rd minute shots were easily claimed by United ‘keeper Covolan, they were the first on target for the home side and represented an improvement by the hosts.

Johnson’s men were still looking dangerous on the break, with Lumbombo-Kalala trying his luck a minute after, forcing Ben Hinchcliffe to palm the ball away from danger. They went even closer in the 63rd minute, with Matt Buse’s curling effort from the edge of the box striking the woodwork.

In the 73rd minute, County came close to pulling a goal back as Connor Dimaio’s effort first struck Robbie Cundy and then the post. Thankfully though, the ball fell kindly into the path of Covolan.

As the clock began to wind down, United performance became typified by calm, sensible play throughout the team, as they remained resolute at the back, in addition to continuing to pose a threat in attack.

Just when a few may have began to question The Gulls’ prospects at this level, Johnson’s men responded by coming up with the perfect away-day performance.

With spirits and confidence well and truly replenished following this stunning result, United now have a week to focus on their next match, when AFC Fylde will be the latest side to visit Plainmoor. Tickets are available here.

See you there, Yellow Army!