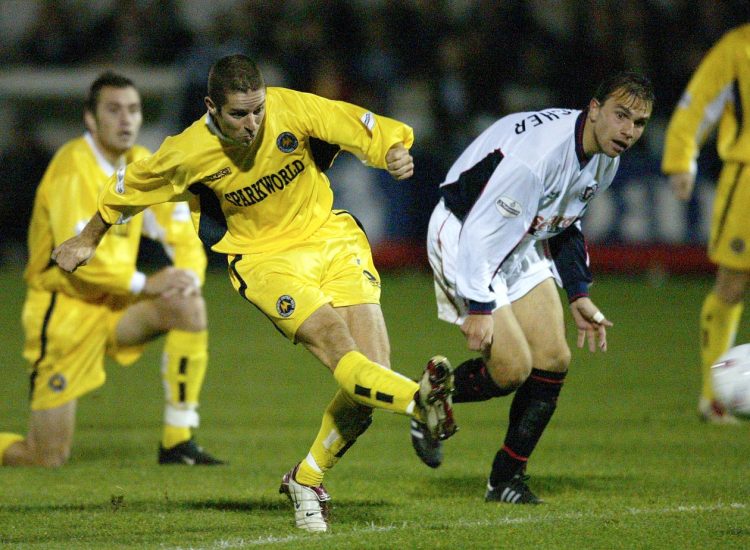 In the latest of our feature celebrating some United favourites of the past, we look back on Alex Russell’s spell at Plainmoor.

Any supporters that saw Alex Russell in the yellow of United between 2001-2005, will have witnessed one of the most cultured and gifted midfielders in recent memory at work.

With Roy McFarland installed by Torquay owner Mike Bateson as the new man in charge at Plainmoor, it was no surprise when the former Cambridge United boss turned to Alex to be the man he built his new-look Gulls side around.

It was at the Abbey Stadium where both had tasted promotion glory two years earlier, with Russell’s superb form in the centre of the park playing a vital role in the U’s securing the Division Three runners-up spot in 1998/99.

A change in manager, and formation, had seen Russell farmed out onto the left-hand side of midfield towards the end of his spell with Cambridge in Division Two, and with Alex eager to reclaim a central role, there were no lack of options as he began to consider the next move in his career.

Rochdale, who provided Russell with his first taste of the Football League back in 1994, were just one of the early suitors, before United’s new assistant manager, the late David Preece, got in contact.

“I was up in Scotland because Rochdale wanted me to sign back again, so I had been up there for a week before David asked me to come down,” explains Alex.

“I had got on well with them at Cambridge, so it was quite an easy conversation really. I asked him what position he wanted to play me in, and when he said ‘centre midfield’, I said I’d come and sign!”

“The year we got promoted at Cambridge, we played three in midfield and I played on the left of the three, and it worked really well. When we went up a division, I went out onto the left of a midfield four, and I didn’t really like it.

“I went to Rochdale on trial. I remember being stuck out on the left and I didn’t think I’d get a kick, so when David said I’d be playing in the centre of midfield I thought it was great.”

By the end of 2001, Russell was joined in United’s revamped side by former Cardiff City midfielder Jason Fowler, much to the delight of Alex, but also to the Yellow Army, who would be richly entertained by the midfield duo over the next three years.

“I remembered Jason from his spell at Cardiff. He’d always stuck in my mind as being a good player.

“He was clever footballer. He had great ability and a lovely touch. When we had the ball, he was just like me and his mind was on the same level, so I loved playing with him. When we played together in the centre it was like Total Football!”

A challenging first season for the team, with United eventually finishing 19th, was not reflective of an excellent individual season for Russell, with his superb performances as United’s midfielder playmaker complimented by ten goals, including a memorable hat-trick at Darlington.

“I remember that well, I still have the ball,” he reveals.

“I got that signed. There’s not much you can really treasure in football, so I kept that!”

With Torquay’s management team having such an influence in securing Alex’s move to Devon, it therefore came as quite a shock when the pair were replaced in the summer of 2002, with Leroy Rosenior appointed as The Gulls’ new Head Coach in his place.

“The first season was a bit touch and go, but by the end of it we had got quite a bit better and I thought we’d have a good chance the following year.

“I had just moved to Torquay, so when Roy and David left, I knew football well enough to know I could have been out of the door. I thought I would just have to give it a go as no-one knew much about what style of play Leroy wanted, so it was really quite tough.”

As it happened, Russell flourished under Rosenior, as his entertaining team went close to securing a play-off place during his first year at the helm.

“We scored a lot of goals that season, but conceded a lot too. People said we were a bit too open at the back, which was probably true, but it must have been great to watch.”

Those defensive frailties were duly resolved during the summer, with two key additions providing the perfect balance to United’s attacking instincts.

“I thought the biggest signing we brought to the club was Craig Taylor at centre-half. He came in and was solid, and with Brian McGlinchey too, they shored up the back. That gave us the platform to win more games than we had been drawing.”

The passing football played by Torquay during 2003/04 was some of the finest, not to mention enjoyable, that Gulls fans have seen, as the club earned their richly deserved reward at Roots Hall on the final day of the season.

“I looked at the support behind the goal, and thought they had come all that way and it was out of our hands,” recalls Alex.

“We had to win the game, because if Huddersfield had won, then at least we could have said that we had done the best that we could have.”

As it transpired, Cheltenham Town did Torquay a huge favour by virtue of their 1-1 draw, leaving United just needing to emerge from the remaining injury time with their 2- lead intact to clinch the club’s first automatic promotion in 38 years.

“David Woozley came on and said that Huddersfield’s game was over and that they had drawn, and it was only at that point I realised we were going up. Those two or three minutes took ages, and then it went mad. It was brilliant.”

Huge celebrations at the final whistle would confirm almost legendary status for all involved on that momentous day, as players and supporters joined together to relish a wonderful achievement.

Although the following season would see United make an instant return to the fourth tier, following a galling last-day defeat at Colchester, it was another season that Russell took huge pride in.

“We went so close, and were playing against much better opponents, but if anything could have gone wrong that year, it did.

“We had a great end to the season and it was just so gutting, as we had been playing really well.”

Alex’s talents always deserved the biggest stage possible, and having played so much of a part in getting United into League One, few supporters could have seriously resented his decision to leave the club for Bristol City in the summer.

It’s clear however, that when Russell looks back on those four years in Devon, he does so with a lot of satisfaction and pleasure.

“When I went to Torquay, it really it reignited a flame for me.

“All the lads lived down there, so we had a good bond because we built something there, and it got better and better every season, it was great. Torquay was bouncing back then, everyone was happy and the weather always seemed good. I really bought into it.

“The open-top bus round town was fantastic. Everyone came out into town, and backed us. I’ll never forget that.

“Whenever I get the chance to come to Torquay, I’ll always have a smile on my face as I’m proud of what I achieved as an individual, and what we did as a team.

“I loved everything about it.”